Why is Bitcoin price down today? 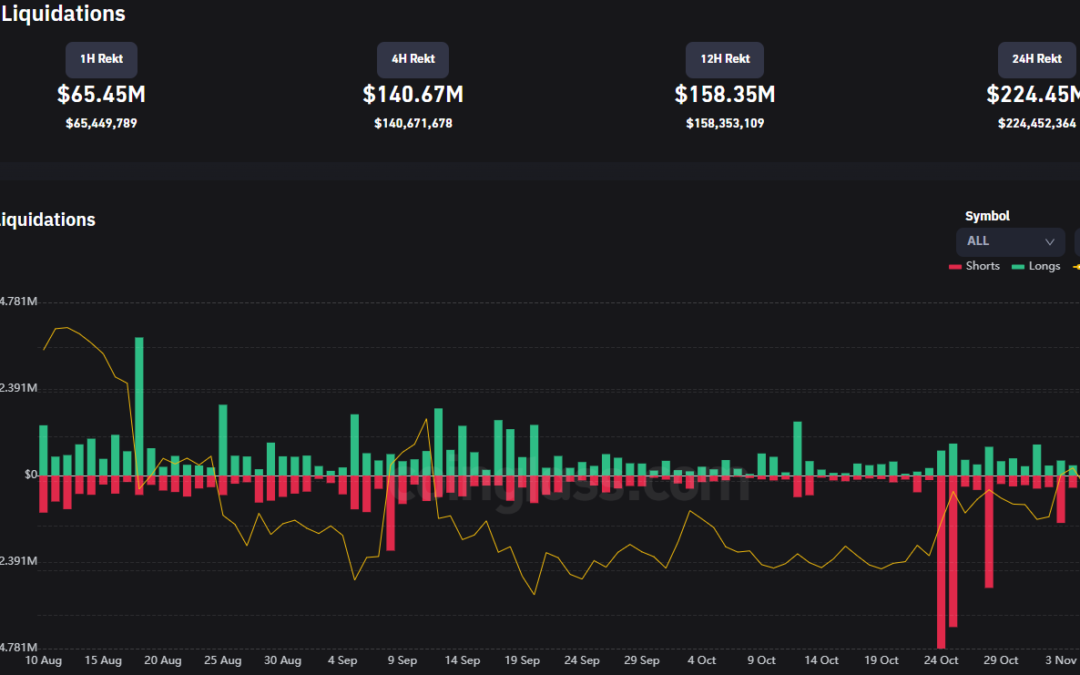 While the Binance and FTX news initially caused an uptick in the market, the day turned south as various unconfirmed sources speculated that FTX’s losses could show a $6 billion deficit.

This price decline breaks Bitcoin’s short-term correlation to the stock market, with the tech-heavy Nasdaq down only 0.32%, while the Dow Jones gained 0.48% on the back of investors’ optimism about the Nov. 8 United States midterm elections.

With the backdrop of the current volatility, $614 million in BTC longs are at risk of liquidation, with over $224 million liquidated on Nov. 8. The fear for many is that if the FTX situation is not resolved by Binance’s bid to purchase the exchange, a sharper sell-off in the market could trigger a liquidation cascade and send BTC price to new lows.

Let’s investigate the main reasons why the Bitcoin price is down today.

Bitcoin price is reacting to the stress placed on the market by FTX, reaching a yearly low after a period when many thought the bear market bottom had been found.

The May 2022 Terra implosion and ultimate collapse of LUNA — since rebranded LUNA Classic (LUNC) — produced the first seven-week losing streak in Bitcoin’s history. The market is drawing parallels between the current FTX bank run, the perceived large budget hole and what happened to Terra earlier this year.

Rising interest rates in the U.S. and abroad weigh on Bitcoin price

Based on the Consumer Price Index report, inflation in the United States increased by 0.6% in September.

The Consumer Price Index report — the most widely followed barometer of inflationary pressure in the United States — climbed to 8.2% in September 2022 from September 2021, slightly more than the 8.1% predicted by experts.

With the upcoming CPI reporting event on Nov. 10, Bitcoin saw a volatile 12% decline in 24 hours, hitting record lows for 2022.

While the number of consumers investing in crypto increased dramatically in 2021, prices are heavily affected by retail traders looking to make money on those shifts. And since June, Bitcoin has been flat, stuck largely in the $18,000–$21,000 range after dropping from its November 2021 all-time high near $68,000. Going below the all-year low may not instantly provoke investor interest.

According to independent market analyst Jaran Mellerud, Bitcoin’s on-chain activity has been down for the whole year. Coinbase’s second-quarter trading volumes fell by around half to $217 billion.

Between mid-June and mid-July, Binance reported a 50% drop in volume, while Kraken and Gemini saw 75% and 80% drops, respectively.

Binance.US was one significant exception, reporting a 2% reduction after halting Bitcoin trading fees in June.

FTX has witnessed a run on the exchange, seeing a net outflow of $1.1 billion in the first week of November.

Related: Why is the crypto market down today?

Is there a chance for Bitcoin price to reverse course?

The short-term uncertainties in cryptocurrencies do not appear to have changed institutional investors’ long-term outlook. According to BNY Mellon CEO Robin Vince, a poll commissioned by the bank found that 91% of institutional investors were interested in investing in tokenized assets in the following years.

Around 40% of them already have cryptocurrency in their portfolios, and approximately 75% are actively investing in digital assets or considering doing so.

In the long term, market participants still expect the price of Bitcoin to go up, especially as more banks and financial institutions are seemingly turning to digital cash for settlement purposes.