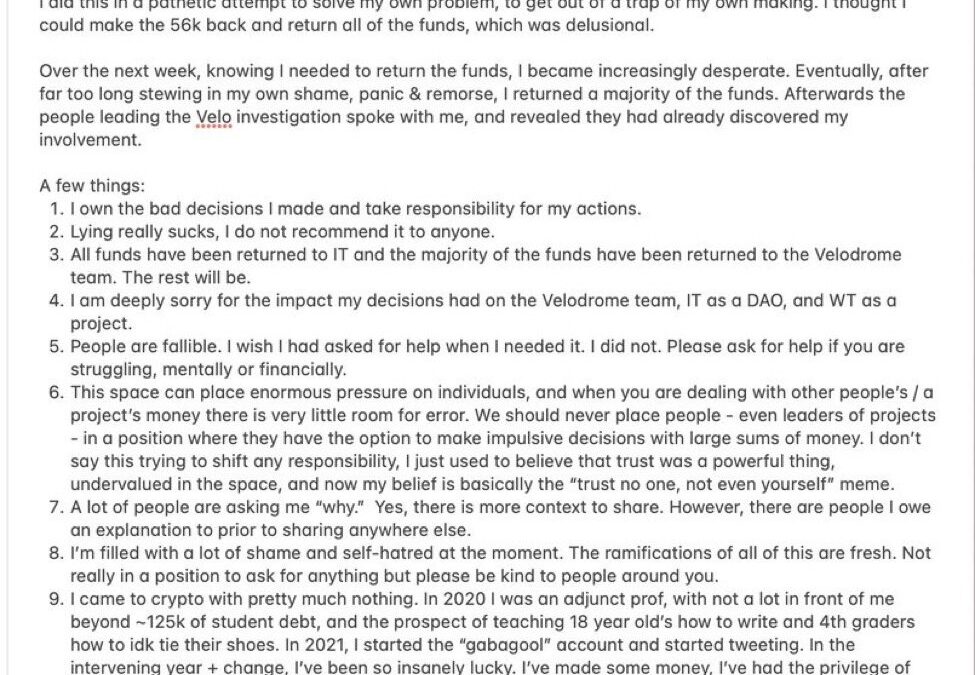 Velodrome Finance, a trading and liquidity marketplace, announced the recovery of $350,000 stolen on Aug. 4. However, the occasion turned bittersweet when internal investigations pointed out the involvement of a prominent team member, who goes by the pseudo name Gabagool.

On Aug. 4, one of Velodrome’s high-worth wallets — dedicated for operating funds such as salaries — was drained off $350,000 before it could be transferred to the company’s treasury multisig wallet. A subsequent internal investigation revealed the attacker’s identification, which allowed the company to recover the entire loot. Velodrome’s official statement revealed:

“Much to our disappointment, we learned the attacker was a fellow team member Gabagool.”

While many community members came in support of the prominent coder, Gabagool owned up to the allegations made against him following Velodrome’s investigation.

An update from Velodrome on our investigation into the team wallet exploit. pic.twitter.com/sz1ePStcT0

Nearly six hours into the revelation, Gabagool released a note revealing various events that led him to attempt theft. Velodrome’s biggest mistake was to give ownership of its wallet’s private key to five individuals, which included Gabagool.

Gabagool, just like many other investors, lost vast amounts of money during the 2022 crypto crash. In an attempt to recoup losses, Gabagool made the hasty decision of withdrawing $350,000 in various cryptocurrencies only to convert it to Ether (ETH) and send it to Tornado Cash.

By the time Gabagool decided to return the stolen funds, Velodrome investigators “revealed they had already discovered my involvement.” He ended the note by stating:

“Not much else to say. I’m extremely stupid, incredibly disappointed in myself and (frankly) unsure about what next, legally speaking.”

On the other hand, Velodrome disclosed working with the legal counsel to determine the next steps. Going forward, Velodrome has decided to revoke ownership of private keys from team members and instead set up gnosis safes for all monetary operations.

BlueBenx, a Brazilian crypto lending platform, too, encountered a hack, but what followed was incomparable to Velodrome Finance. BlueBenx reportedly blocked all of its 22,000 users from withdrawing their funds following an alleged hack that drained $32 million.

While no details about the hack were revealed, numerous investors raised eyebrows on the matter, with one stating:

“I think there’s a high probability of it being a scam because this whole hacker attack story seems like a lot of bullshit, something they invented.”

The lack of trust among investors stems from the fact that numerous crypto platforms have recently halted funds withdrawal while hiding their incompetency in fulfilling the previously promised yield returns to the users.