Ukraine has shown the value cryptocurrency offers to real people 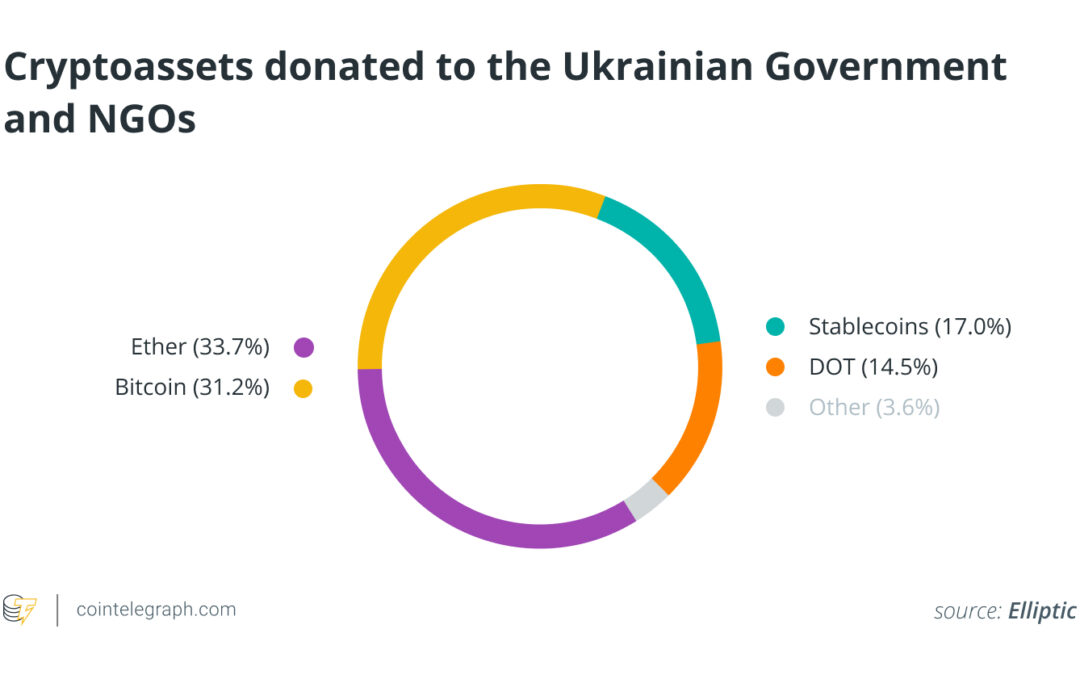 The world is still struggling to comprehend the geopolitical and human impact of the Ukraine war. With more than 10 million people fleeing their homes and 6 million seeking refuge in foreign countries, it’s been a time to support a sovereign country under attack.

It has also proven to be the moment where cryptocurrency proved its true value to real people. Not as the high-concept tech toy for the wealthy elite as many had previously dismissed it, but rather as an empowering force for good in a dangerously unstable world.

When the Russian invasion began in February, Twitter accounts belonging to the Ukrainian government posted pleas for crypto asset donations. Now, as more than $100 million in crypto donations have already been raised to support the Ukrainian resistance, those of us who have championed crypto as a way of giving ordinary people rather than corporations and governments control over their own money have been vindicated. While the banking financial system has been under sustained attack by Russia, using both military and cyberattacks, this life-saving money has gone directly to those in need via crypto.

Ukraine took a number of measures in an effort to stabilize the banking sector and protect the country’s economy, including suspending foreign cash withdrawals, limiting how much currency can be withdrawn, and banning cross-border forex transactions. Consequently, Ukrainians are turning to borderless and trustless crypto to enable them to either survive in or flee from the war zone.

Related: The Ukraine invasion shows why we need crypto regulation

We can now see the value of having somewhere safe to store money in a time when the traditional financial system is under threat — a completely separate payment infrastructure that can step in and pick up the slack if the current infrastructure is destroyed in a black swan event. Whether it is a state destroying our ability to pay for goods and services or even a major cyberattack, the blockchain provides a vital backup to halt the destruction of entire economies.

We have witnessed digital currencies being used to quickly transfer cash to those in need from relatives abroad, enabling fleeing refugees to buy crucial goods and services when there is no cash in their ATMs after critical infrastructure has been decimated by relentless Russian attacks. Anyone with a mobile phone and internet access — which has been bolstered by the thousands of Starlink satellite internet dishes generously provided by Elon Musk’s SpaceX — can access their funds via crypto wallets.

Digital currencies have not only shown their worth in helping desperate Ukrainian refugees but also in preventing sanctions from being averted. Contrary to speculation at the onset of the conflict, desperate Russian oligarchs have discovered that crypto is not the safe haven for their funds that they had hoped.

As the United Kingdom’s independent crypto industry association, we called on all of our members and the wider crypto community to take all necessary steps to enforce economic sanctions against Russia through engagement with professional compliance teams, blockchain analytics companies, the National Crime Agency and government experts in illicit finance.

Contrary to the outdated image of crypto as a digital currency favored by criminals, every transaction on the blockchain is, in fact, publicly available, providing a secure and transparent record on a ledger that anyone can see. This publicly available information means that exchanges can use transaction monitoring tools to trace the source of the funds and flag what is coming from blacklisted, sanctioned sources.

The list of blacklisted addresses is in the public domain, which means that exchanges can not only identify and block sanctioned names but also prevent them from opening accounts in the first place.

While there has been virtually no evidence of Russia meaningfully using crypto to evade sanctions, Ukraine has been actively utilizing crypto to do tremendous good.

Contrary to some speculation, if Russia wanted to evade sanctions by converting fiat currency into crypto today, it would be extremely difficult because there is insufficient liquidity in the market to support exchanging its fiat for cryptocurrency at a sufficient scale.

If an oligarch is attempting to convert $1 billion into crypto, they would find that this vast amount of digital currency is simply not available in one place because it is scattered across thousands of marketplaces.

The legacy systems upon which our financial markets stand are not going anywhere, and quite rightly, because governments around the world value the safety, predictability and security they offer. But if we could start from scratch, it is likely that we would turn to blockchain technology, which is at the cutting edge of financial technology thanks to its superior efficiency. It does away with all the intermediaries, reduces the time to settle, increases the global reach for sending payments, and reduces costs.

Big payment providers, which connect the banking world with merchants, have already embraced crypto, providing the ability to pay with digital currencies as an alternative to paying a credit card charge. The cost of these transactions has increased significantly in recent years, and if a company is turning over tens of millions of dollars per year, 2% is a lot of money. If they have another way to pay using crypto for a fee of less than 1%, it is a better choice.

Ukraine’s financial infrastructure may emerge from this tragic war at ground zero, and we may soon witness a modern society rebuilding its economy with a strong blockchain technology element built in. As the shockwaves of this tragic conflict resonate around the world, crypto has risen to the challenge and proven itself a vital source of both financial stability and accountability.

The views, thoughts, and opinions expressed here are the author’s alone and do not necessarily reflect or represent the views and opinions of Cointelegraph.

Ian Taylor is the executive director of CryptoUK, an independent industry body that exists as a cohesive, credible voice for the evolving United Kingdom digital assets industry. Having spent 20 years in investment banking, he has held many senior roles across trading, treasury and risk management, and is still involved with a major global bank. In his role he has built a community of more than 100 of the most influential industry participants and campaigns for a fit-for-purpose regulatory framework in the U.K., Europe and beyond.