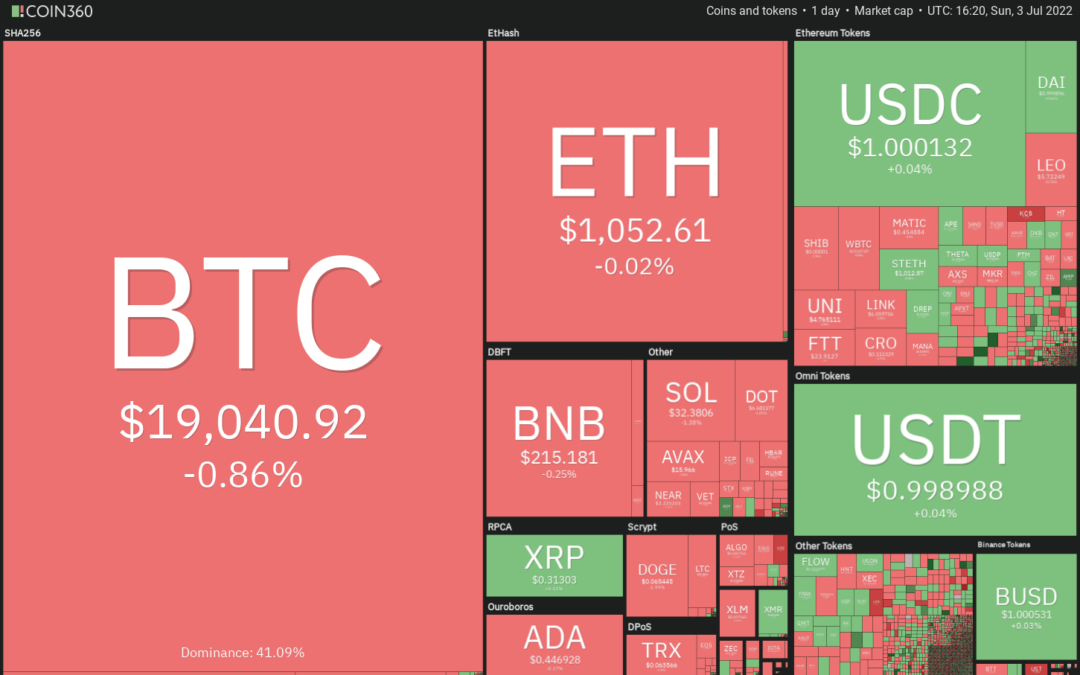 The bears are attempting to sink Bitcoin (BTC) below $19,000 to further cement their advantage over the crypto market. Analysts watching Bitcoin’s MVRV-Z Score, a metric that measures how high or low Bitcoin’s price is relative to “fair value,” expect an even deeper fall before the bottom is finally reached.

However, economist, trader and entrepreneur Alex Krueger pointed out that Bitcoin’s volume hit an all-time high in June. Usually, the highest volume in a downtrend is indicative of capitulation and that “creates major bottoms.” If Bitcoin follows the historical pattern of the 2018 bear market, Krueger expects the bottom to form in July.

Due to the tight correlation between Bitcoin and the S&P 500, crypto traders will have to keep a close eye on the performance of the United States equities markets next week, which may be influenced by the release of minutes from the U.S. Federal Reserve’s last meeting and the June jobs report.

Could Bitcoin form a higher low and lead the crypto markets toward the path of recovery? Let’s study the charts of the top-5 cryptocurrencies that indicate the possibility of a relief rally in the short term.

The long wick on Bitcoin’s July 1 candlestick shows that bears continue to sell on rallies near the 20-day exponential moving average (EMA) of $21,396. Although bears pulled the price below $19,637, they have not been able to build upon the momentum.

The bulls are attempting to push the price back above $19,637. If they succeed, the BTC/Tether (USDT) pair could again rise toward the 20-day EMA. A break and close above $22,000 could indicate a potential trend change. The pair could then attempt a rally to the 50-day simple moving average (SMA) of $25,938.

On the contrary, if the price turns down from the current level, it will suggest that bears remain in control. The sellers will then strive to pull the price below $18,626. If they do that, the pair could slide to the important support zone of $17,960 to $17,622.

This is an important zone for the bulls to defend because a failure to do so could start the next leg of the downtrend. The pair could then slide to $15,000.

The 4-hour chart shows that bears are aggressively defending the 20-EMA. Both moving averages are sloping down and the relative strength index (RSI) is in the negative zone, indicating that bears have the upper hand. A break below $18,626 could further strengthen the bears.

This bearish view could be negated in the short term if bulls push the price above the 20-EMA. The pair could then rise to the 50-SMA, where the bears may again pose a strong challenge. If the price rises above this resistance, the pair could rally to $21,000 and thereafter to $22,000.

Shiba Inu (SHIB) has been trading in a tight range near the moving averages as the bulls attempt to form a higher low near $0.000009. Usually, a tight range trading is followed by a range expansion.

Contrary to this assumption, if the price breaks below $0.000009, it could trap the bulls who may have bought the break above the 50-day SMA. That could clear the path for a possible retest of $0.000007. A break below this crucial support may indicate the resumption of the downtrend.

The 4-hour chart shows the formation of a symmetrical triangle pattern. The pair has been stuck between the 20-EMA and the support line of the triangle. If bears sink and sustain the price below the support line, the pair could drop to $0.000009. A break below this support could signal that bears are back in the driver’s seat.

Polygon (MATIC) turned down from the strong overhead resistance of $0.61 on June 26 and the bears pulled the price below the 20-day EMA of $0.50 on June 28. A minor positive is that the bulls did not allow the bears to build upon their advantage and bought the dip on June 30.

Since then, the MATIC/USDT pair has been trading near the 20-day EMA. This suggests that the bulls are attempting to push the price back above the level. If they succeed, the pair could again try to clear the hurdle at $0.61.

The RSI has made a positive divergence, indicating that the bears may be losing their grip. A break above $0.61 could clear the path for a possible rally to $0.75.

Contrary to this assumption, if the price turns down from the current level and slips below $0.41, it will suggest that the recent recovery may have been a bear market rally. The sellers will then attempt to pull the price back toward the crucial support at $0.31.

The buyers pushed the price above the downtrend line and the 20-EMA but could not clear the psychological level of $0.50. This attracted selling, and the bears have pulled the price to $0.45. If this support cracks, a retest of $0.41 is likely.

On the contrary, if the price rebounds off the current level, it will suggest that the bulls are buying on dips. The bulls will then make another attempt to clear the overhead resistance at $0.50. If they succeed, the pair could rally to $0.55 and then to $0.61.

After a prolonged downtrend, Cosmos (ATOM) is attempting to form a bottom. The buyers pushed the price above the 20-day EMA of $7.84 on July 1, but the 50-day SMA of $8.81 is likely to act as a strong barrier.

The flattish 20-day EMA and the RSI near the midpoint indicate that the selling pressure may be reducing. If buyers thrust the price above the 50-day SMA, the bullish momentum may pick up and the ATOM/USDT pair could rally to $10.84 and then to $12.50. A break and close above this level could suggest a potential trend change.

This bullish could invalidate in the short term if the price turns down from the current level and breaks below $6.89. If that happens, the pair could again retest the critical support at $5.55.

The 4-hour chart shows that bulls are attempting to flip the 50-SMA into support. If the price rises from the current level and breaks above $8.38, the bulls could challenge the immediate resistance at $8.75. A break above this level could signal the resumption of the up-move. The pair could then rise to $9.00.

Conversely, if the price turns down and plummets below the moving averages, it will suggest that bears continue to sell at higher levels. The pair could then slide toward $7.18 and then $6.89.

Buyers pushed and closed ApeCoin (APE) above the 20-day EMA of $4.69 on June 27, but they could not build upon the recovery. The bears pulled the price back below the 20-day EMA on June 29, but a positive sign is that the bulls have not given up much ground.

This suggests that the buyers are not dumping their position as they anticipate a move higher. The flattening 20-day EMA and the RSI just below the midpoint suggest that the selling pressure could be reduced.

If buyers drive the price above the 20-day EMA, it could tilt the advantage in their favor. The APE/USDT pair could then rally to the 50-day SMA of $5.72, where the bears are expected to mount a strong defense.

Contrary to this assumption, if the price turns down from the current level and plummets below $4.21, the next stop could be $3.85.

The 4-hour chart shows a symmetrical triangle formation, indicating indecision among buyers and sellers. Both moving averages are flat and the RSI is near the midpoint, suggesting a status of equilibrium.

If the price dips below the triangle, it will suggest that bears have asserted their supremacy. The pair could then decline to the pattern target of $3.78.

Alternatively, if the price rises from the current level and breaks above the triangle, it could signal advantage to the bulls. The pair could then rise to $5.38 and later to $5.57.

The views and opinions expressed here are solely those of the author and do not necessarily reflect the views of Cointelegraph. Every investment and trading move involves risk, you should conduct your own research when making a decision.