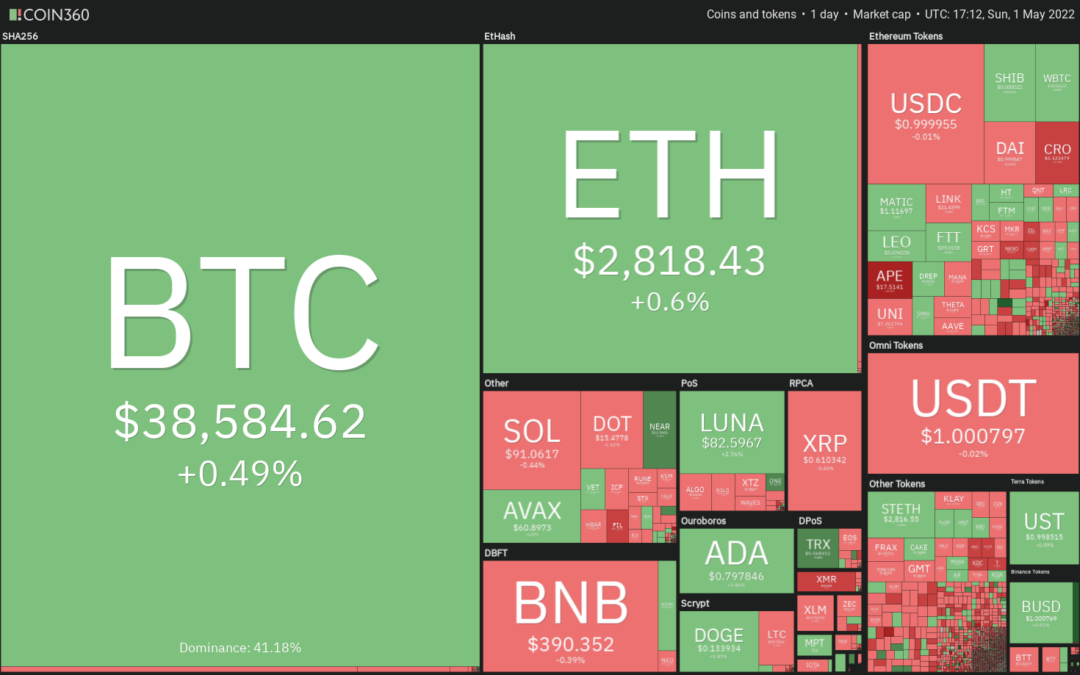 However, a major positive for crypto investors is that Bitcoin is still above its year-to-date low near $33,000. In comparison, the Nasdaq 100 has hit a new low for 2022 while the S&P 500 is just a whisker away from making a new year-to-date low. This suggests that Bitcoin has managed to avoid a major sell-off, indicating demand at lower levels.

Along with Bitcoin, Ether (ETH) has also managed to sustain well above its year-to-date low. According to cryptocurrency intelligence firm Jarvis Labs, both Ether whales and retail fish have been accumulating at lower levels.

After surviving the onslaught in April, could Bitcoin start a strong recovery and pull altcoins higher? Let’s study the charts of the top-5 cryptocurrencies that may outperform in the near term.

Bitcoin slipped to the support line of the ascending channel on April 30 but the rebound off it today suggests that the bulls are defending the level with all their might.

Although the downsloping 20-day exponential moving average ($39,956) suggests advantage to sellers, the positive divergence on the relative strength index (RSI) indicates that the negative momentum may be weakening.

If the rebound sustains, the bulls will attempt to push the price above the 20-day EMA. If they succeed, it will suggest accumulation near the support line. The pair could then rise to the 50-day simple moving average ($41,954).

On the contrary, a weak rebound will signal a lack of aggressive buying near the support line. If the price turns down from the current level or the 20-day EMA and breaks below the channel, the BTC/USDT pair could drop to $34,322 and later retest the critical support at $32,917.

The 4-hour chart shows that the price has been declining inside a falling wedge pattern. The RSI has formed a positive divergence, indicating that the bearish momentum may be weakening.

If the price breaks above the resistance line of the wedge, the pair could pick up momentum and rally to $41,000. This level may again act as a resistance but if bulls clear this hurdle, the next stop could be $43,000.

Conversely, if the price turns down from the 20-EMA and breaks below the wedge, the selling could pick up momentum.

Terra’s LUNA token has been consolidating in an uptrend for the past several days. The price rebounded off the strong support at $75 today, suggesting that the bulls are defending this level aggressively.

The LUNA/USDT pair could now attempt a rally to the 20-day EMA ($88). This level could act as a hurdle where the bears might try to stall the up-move. If the price turns down from the 20-day EMA, it increases the odds of a break below the $75 support.

If that happens, the pair will complete a bearish head and shoulders pattern, signaling a potential trend change.

Conversely, if bulls propel the price above the 20-day EMA, the pair could again rise to the psychological resistance at $100. The buyers will have to clear this barrier to indicate that the correction may be over.

The price has rebounded off the strong support at $75 and the bulls will now attempt to push the pair above the 20-EMA. If they manage to do that, it will suggest that the selling pressure could be reducing. A break and close above the 50-SMA could indicate that the pair may remain range-bound between $100 and $75 for some time.

Contrary to this assumption, if the price turns down sharply from the current level or the 20-EMA, it will suggest that the bears are selling on every minor rally. That could result in a retest of the strong support at $75.

The failure of the bulls to push Near Protocol (NEAR) above $18 resulted in a sharp decline in the past few days. The price slipped to the psychological support at $10 on April 30 but the strong rebound today indicates aggressive buying by the bulls.

The bulls will have to clear this hurdle to signal that the corrective phase may be over. That could start a rally toward the strong overhead resistance at $18.

Contrary to this assumption, if the price turns down from the 200-day SMA, the likelihood of a break below $10 increases. If that happens, the pair could extend its correction to $9.30 and later to $8.

The bounce has risen above the 20-EMA which is the first sign of strength. If buyers sustain the price above the 20-EMA, the pair could rally to the 50-SMA. A break and close above this level will suggest that the short-term downtrend could be over.

Conversely, if bulls fail to sustain the price above the 20-EMA, it will indicate that bears continue to sell on rallies. The bears will then make one more attempt to pull the pair below the strong support at $10 and resume the decline.

VeChain (VET) has been consolidating in a large range between $0.043 and $0.083 for the past many days. The price reached the support of the range which has acted as a strong floor on three previous occasions.

The bounce off the $0.043 support today suggests that the buyers are defending the level with vigor. If the buying momentum sustains and the price rises above the 20-day EMA ($0.055), it will suggest that the VET/USDT pair may stay in the range for a few more days.

Alternatively, if the price turns down from the current level or the 20-day EMA, it will indicate that demand dries up at higher levels. The bears will then attempt to sink the pair below the range. If they can pull it off, the pair may resume its downtrend and decline to $0.034.

The price has rebounded off the strong support at $0.043 and the bulls will now try to push the pair above the 20-EMA. If they succeed, it will suggest that the bears may be losing their grip. The pair could then rise to the 50-SMA. A break and close above this level could clear the path for a possible rally to $0.065.

Conversely, if the price turns down from the 20-EMA, it will suggest that bears are selling on rallies to strong resistance levels. The bears will then attempt to pull the pair below the strong support at $0.043 and extend the decline.

STEPN (GMT) has been correcting in an uptrend. A positive sign is that the bulls have not allowed the price to break below the 20-day EMA ($3.13). This suggests that the sentiment remains positive and bulls are buying on dips.

The buyers will now try to push the price to the overhead resistance at $4.17. If buyers clear this hurdle, the GMT/USDT pair may resume its uptrend. The pair could then attempt a rally to the psychological level at $5.

The upsloping 20-day EMA signals advantage to buyers but the RSI has been forming a negative divergence suggesting that the bullish momentum may be weakening.

If the price turns down and breaks below the 20-day EMA, the selling could intensify. The pair may then decline to the 50-day SMA ($2.08).

The bears tried to sustain the price below the 50-SMA but failed. This suggests strong demand at lower levels. If bulls push the price above the 20-EMA, it will indicate that the selling pressure may be reducing. The pair could then retest the all-time high at $4.17.

Conversely, if the price turns down from the 20-EMA, it will suggest that bears are active at higher levels. The sellers will then again try to pull the pair below the 50-SMA. If they manage to do that, the pair may slide to the strong support at $3.

The views and opinions expressed here are solely those of the author and do not necessarily reflect the views of Cointelegraph. Every investment and trading move involves risk, you should conduct your own research when making a decision.