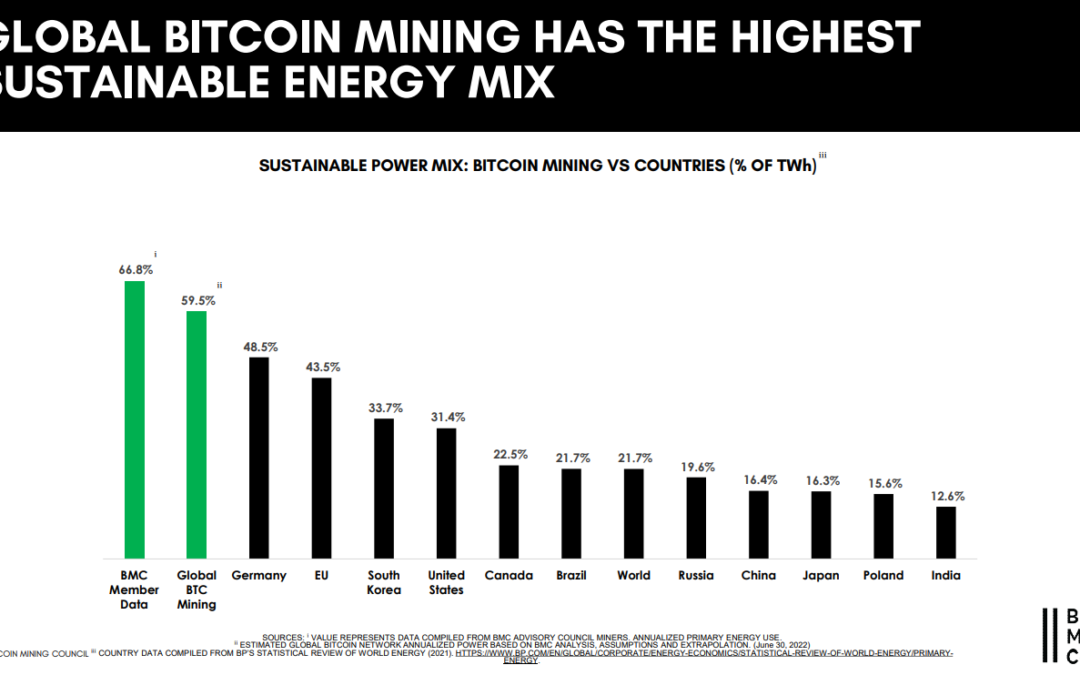 Nearly 60% of the electricity used to power Bitcoin (BTC) mining machines comes from sustainable sources, according to the latest Q2 2022 report from the Bitcoin Mining Council (BMC).

In its Q2 review of the Bitcoin network released on Tuesday, the BMC found that the global Bitcoin mining industry’s use of sustainable energy is up 6% from Q2 2021 and up 2% from Q1 2022, reaching 59.5% in the latest quarter — adding that it is “one of the most sustainable industries globally.”

Q2 Bitcoin mining hash rate is up 137% year-on-year, while energy usage is only up 63%, demonstrating an efficiency increase of 46%

Further details about the energy efficiency of Bitcoin mining were shared in the BMC’s YouTube briefing of its full report on Tuesday with MicroStrategy CEO Michael Saylor. Compared to eight years ago, Saylor said miners’ energy efficiency has grown 5,814%.

It also found that Bitcoin mining accounted for just 0.09% of the 34.8 billion metric tons (BMT) of carbon emissions estimated to be produced globally and consumed just 0.15% of the global energy supply.

Saylor noted in the briefing that Bitcoin’s detractors’ predictions about the network’s energy use have so far not been accurate:

“People have been predicting that Bitcoin was going to use up all the energy in the world for quite a while. That’s not happening and it’s not going to happen because of the efficiency dynamics.”

During the same briefing, Marathon Digital Holdings CEO Fred Thiel stated that mining efficiency is part of a “virtuous cycle” that will see the industry become “more and more energy efficient:”

“The efficiency gains are 100% focused on energy consumption because energy is our key input cost. As energy prices go up, it forces us to become more efficient.”

The report outlined how the rising Bitcoin price has been driving network energy efficiency, as evidenced by the sharp increase in efficiency over the past eight years.

Data from the report was derived from members of the BMC, which comprise 50.5% of the world’s Bitcoin mining hashing power.

United States lawmakers have been particularly interested in the state of the Bitcoin mining energy consumption in the country.

Last week, six U.S. lawmakers, including Senator Elizabeth Warren, sent a letter to the Environmental Protection Agency (EPA) and Energy Department (DOE), asking the agencies to require mining companies to report on their emissions and energy use.