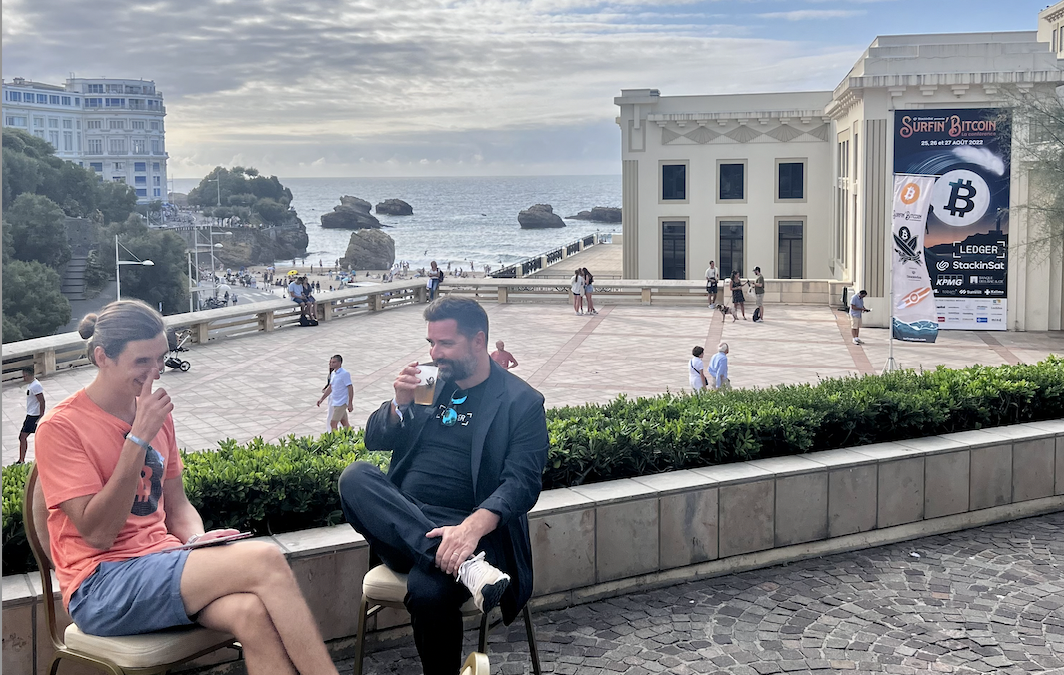 A sublime sunset enveloped Biarritz Casino on Aug. 27, bringing France’s largest Bitcoin (BTC) conference to a close. Located in southwest France and organized by French Bitcoin exchange Stackin Sat, Surfin Bitcoin assembled a host of Bitcoin OG’s, newbies and no coiners, those yet to buy or earn crypto, in a setting that would rival any Hollywood film set.

Bitcoiners networked in the hope of learning more about the Lightning Network, landing jobs at one of the many French Bitcoin companies present — from Galoy Money to Découvre Bitcoin — or simply rubbing shoulders with fellow Bitcoin believers. In a touch of bear market irony, as the Bitcoin chips are currently way down, the event venue took place at the illustrious Biarritz Casino.

From Bitcoin core maintainers to European royalty to naturally CEOs from the largest French crypto companies, the vibe was distinctly French, albeit with a fizzy international influence.

Bitcoin maximalism was on full display. Panelists and moderators had carte blanche to slamdunk on shitcoiners as hotly anticipated debates compared crypto venture capitalists to gamblers and boasted the merits and queried the limitations of Bitcoin’s layer-2 Lightning Network. Representatives from Aave and various crypto decentralized autonomous organizations (DAOs) expressed their admiration for Bitcoin but held true to their vision of a multi-coin future.

While there were several official commercial announcements during the event, speakers spontaneously stumbled across certain revelations. During a panel on mining, Pierre Rochard of Riot Mining announced his intention to rename mining to “timestamping” to avoid confusion regarding the act of retrieving scarce resources from a physical space. Timestamping would make education easier, he explained, and it’s also Satoshi Nakamoto’s way of explaining mining in the white paper.

Similarly, on the Lightning Network panel, Blockstream’s Christian Decker, also known as Dr. Bitcoin, described the Lightning Network as an “ant network.” In essence, he explained, the LN behaves like an ant colony. Much like a group of ants, the LN seeks out productive areas of activity and congregates in spaces where efficient routes or channel hops can link together.

This was a first for me, a #LittleHODLer gallery section at @SurfinBitcoin I also had the opportunity to create a drawing for the conference that was auctioned off for charity. Thank you for everything @Jhersco @Joss_do_it_BTC and team pic.twitter.com/pNgBhaXbpW

Among the workshops and Q&A sessions, European Bitcoin artists such as Lina Seiche, the creator of the Little Hodler, displayed their pieces. Konsensus, a Bitcoin book publisher, sold French translations of popular Bitcoin books for a couple of Satoshis — the smallest denomination of a Bitcoin —in the main hall. The usual Bitcoin t-shirts and merchandise could also be purchased for sats. But, to many Bitcoiners’ chagrin, coffees, beers and refreshments were paid for with fiat money.

Daniel Prince, co-host to the United Kingdom’s second biggest Bitcoin podcast, Once Bitten, told Cointelegraph that Bitcoin adoption at the conference and surrounding area was poor:

“The casino guys are not orange-pilled, they’re only accepting cash or card as payment. Even though, I just asked ‘I wanna pay you guys in Bitcoin,’ but no, they’re not set up.”

Nonetheless, while the waves crashed around the Bitcoin bubble on Biarritz’s La Grande Plage, the waves of Bitcoin adoption were meager by comparison. From interviews snatched with street vendors, merchants, churros sellers and even surfers, Cointelegraph reporters learned that the area was “no coiner” territory. Nobody in the surrounding area had transacted with Bitcoin; no one could accurately describe the cryptocurrency or even recognize the Bitcoin “B” on a t-shirt or conference logo.

There was one exception. The 19-year-old driver of Biarritzs’ sightseeing tour train, Le Petit Train, had a crypto story to share. The train conductor reportedly bought Bitcoin when he was 14 — when the price was around $500 — but sadly, he had lost access to his seed phrase to the 2.36 BTC. He joked that’s why he was working as a train driver over the summer.

The Stackin Sats team hit a dead-end for Bitcoin payments when the mayor of the Biarritz region reportedly halted the conference hall bars from accepting Bitcoin. As such, Bitcoiners were obliged to hodl their coins and spend their euros instead. That didn’t discourage many of the Bitcoiners — including Prince — from orange-pilling local merchants such as taxi drivers and surf instructors. After all, Bitcoin is a grassroots, community-driven movement.

Josselin Tonnellier, a co-founder of the conference, told Cointelegraph that the French crypto scene is dominated by blockchain companies, not Bitcoin advocates. In an exclusive interview, he lamented that the French fail to discern Bitcoin and blockchain. There there is a lot more education to be done, he said, as “pro blockchain narratives” hinder adoption in his home country.

Related: Bitcoin is for those in need, the rest need time to learn: Surfin Bitcoin panel

In an attempt to encourage no coiners, the first day of the conference was free entry. The open day, called “Surfin Day,” enticed locals to dip their toes in the balmy Bitcoin waters. There was a Satoshi-inspired treasure hunt, a surf competition to win Sats and a screening of the popular French Bitcoin documentary, Le Mystère de Satoshi. The day promoted exchange and discussion “between participants of a growing Bitcoin community.”

It appears to have worked. At a surf shop up the street from the conference, local Cécile told Cointelegraph on Aug. 28 that not only did she attend the Surfin Day, but she was inspired to learn more about Bitcoin. “Bitcoin is not as difficult as it first seemed,” she explained in French. Maybe she’ll accept Bitcoin in time for next year’s edition of Surfin Bitcoin.

However, with flagrant reminders that Bitcoin uses more energy than “insert small to medium-sized country here” and that “unhosted wallets” should be banned and faced with grueling Know Your Customer laws, it’s no wonder that Bitcoin adoption in France is slow. The European Union’s stance on Bitcoin is clear-cut: regulation is coming and Bitcoin will be lumped together with every other crypto project.

Bitcoin adoption in France will undoubtedly remain a ripple as the price continues to tread water. To make waves, Bitcoin would require a swell of positive public sentiment or a pro-Bitcoin splash from Macron — France’s anti-crypto leader — or the European Union, which shows no sign of abating its Bitcoin bashing.

The Bitcoin Boat, called Sato Boat, set sail on the final day of the conference. Faced with a calm sea and an extended bear market, the Bitcoin adage, “stay humble, stack sats,” springs to mind. Overall, Surfin Bitcoin is “ze place to be” for the French Bitcoin believers, but there’s a lot of work and a heck of a journey ahead for the French Bitcoin scene to achieve greater levels of adoption.