Retail buyers made up more than 80% of NFT transactions in 2021: Chainalysis 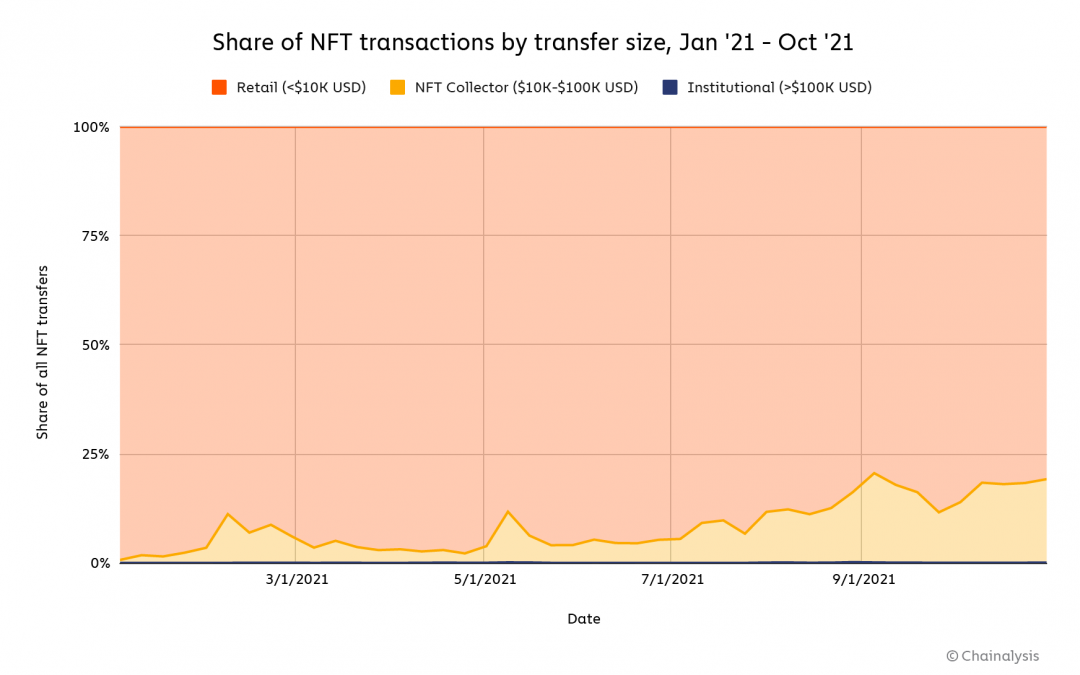 More than 80% of all nonfungible token (NFT) transactions were worth less than $10,000 in 2021 according to Chainalysis which categorized them as “retail” in recent research.

While retail transactions accounted for more than 80% of all NFT transactions on any given day in 2021, collector-sized transactions rose from 6% in March to 19% by Oct. 31 indicating an increase in larger collectors as the year progressed.

Institutional-sized transactions accounted for less than 1% of all transfers but made up 26% of the actual trading volume during the period, it added.

The chart below shows the dominance of retail transactions throughout the year from January to October, with a definitive uptick in collector-sized transactions beginning by September.

The share of total transfers was mostly made up by retail, but collectors and institutions have made up the lion’s share of NFT dollar-denominated transfer volume since March. Collector-sized transactions made up 63% of the volume and institution-sized transactions made up 26%, meaning retail transfers came to 11% of the volume for the time period studied.

The researchers contrasted the NFT market with the wider cryptocurrency market, where retail transactions make up a far smaller proportion of the total transactions.

“The data shows that the NFT market is far more retail-driven than the traditional cryptocurrency market, where retail transactions make up a negligible share of all transaction volume.”

The earning potential associated with NFTs was among several factors that drove cryptocurrency adoption through 2021. That is evidenced by the record $17.7 billion in NFT sales expected through 2021, according to a report from Cointelegraph Research.

In the past week alone, NFT sales amounted to $300 million, nearly a quarter of which came from metaverse land purchases at The Sandbox.

Additionally, there has been at least $26.9 billion in cryptocurrency sent to ERC-721 and ERC-1155 (the industry dominant Ethereum standards for NFTs) contracts through 2021 according to Chainalysis.

Despite the tremendous amount of money being spent on NFTs, the report stated that “just 28.5% of NFTs purchased during minting and then sold on the platform result in a profit.”

Chainalysis suggested getting whitelisted to increase the chances of turning a profit from a newly-minted NFT. Users who made the whitelist on a minting event on OpenSea turned a profit 75.7% of the time versus the 20.8% who did so without being whitelisted.

“The data suggests it’s nearly impossible to achieve outsized returns on minting purchases without being whitelisted.”

However, NFTs bought on the secondary market after minting “leads to profit 65.1% of the time,” the report added, suggesting that if one cannot make the whitelist, it is better to wait for an NFT collection to hit a secondary marketplace rather than participating in a minting event.