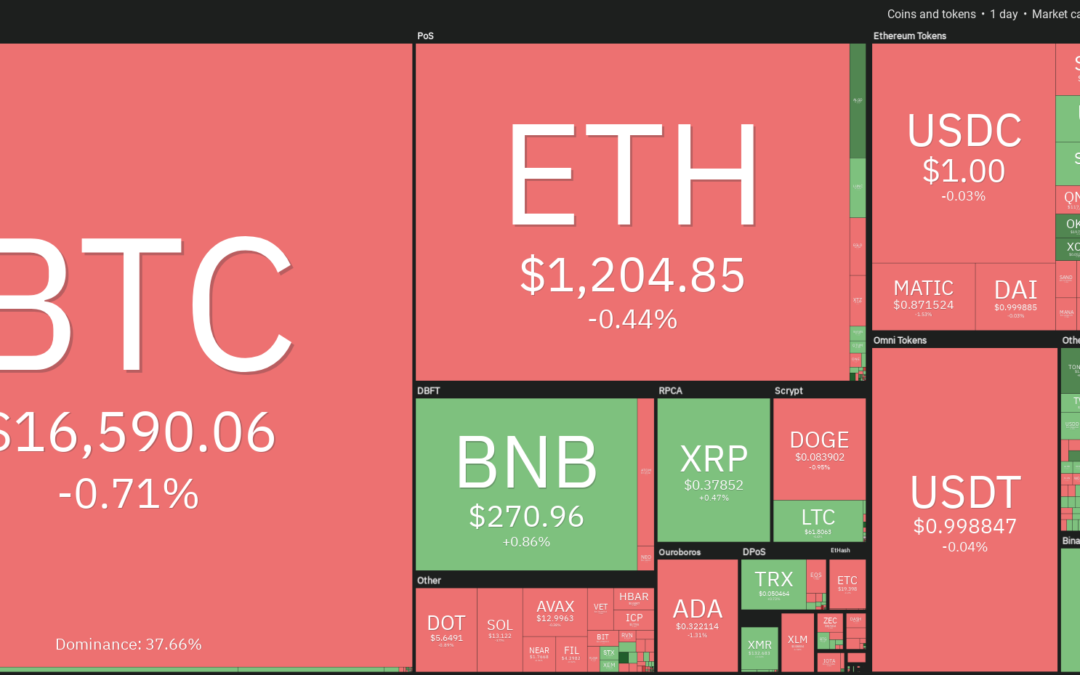 The sentiment across the cryptocurrency ecosystem remains fragile as market participants assess the impact of the FTX crisis on various businesses within and outside of the crypto sector. Trading firm QCP Capital said in its latest circular on Telegram that crypto assets may continue their underperformance till the new year. QCP projects Bitcoin (BTC) to plunge to $12,000 and Ether (ETH) to $800.

Looking at the brighter side, FTX could be the last major player to bite the dust during the current bear market cycle, according to CK Zheng, co-founder of crypto hedge fund ZX Squared Capital.

Zheng also added that institutional investors who have a long-term horizon may continue to invest in blockchain technology and select cryptocurrencies such as Bitcoin and Ethereum.

When the sentiment is bearish, rumors create panic among traders who dump their holdings out of fear. Usually, these occasions form a bottom. Traders may remain cautious and avoid placing large bets until the dust settles and the markets confirm a bottom.

What are the important levels to keep an eye on and which could suggest that the correction may be over? Let’s study the charts of the top 10 cryptocurrencies to find out.

Bitcoin continues to trade below the breakdown level of $17,622, which is a negative sign. After a period of high volatility, the price has been stuck in the range between $16,229 and $17,190.

The 20-day exponential moving average (EMA) of $17,980 is sloping down and the relative strength index (RSI) is in the negative territory, indicating that the bears are in control. If the price turns down and breaks below $16,229, the BTC/Tether (USDT) pair could retest the Nov. 9 low of $15,588.

A break and close below this support could trigger panic selling, which could pull the pair to $12,200. On the contrary, if buyers drive the price above $17,190, it will suggest strong demand at lower levels.

The pair could then rally to the overhead resistance zone between $17,622 and the 20-day EMA. A break and close above this zone could indicate the start of a new up-move.

Ether has been gradually losing ground in the past few days. The bears may try to build upon their advantage by pulling the price below the immediate support of $1,171. If they succeed, the pair could decline to the support line of the descending channel pattern.

The downsloping 20-day EMA of $1,325 and the RSI in the negative zone indicate that sellers have the upper hand. If the bears pull the price below the support line of the channel, the selling could accelerate and the ETH/USDT pair may drop to $1,000.

The first sign of strength will be a break and close above the moving averages. Such a move could open the gates for a possible rally to the downtrend line. The bulls will have to clear this hurdle to signal the start of a new up-move.

BNB (BNB) once again dipped close to the strong support of $258 on Nov. 17, but the bulls held their ground. Buyers will now attempt to start a relief rally that could reach the 20-day EMA of $291.

The downsloping 20-day EMA and the RSI in the negative territory indicate that the bears are in control. If the price turns down from the current level or the 20-day EMA, the bears will make one more attempt to break the support at $258. If they can pull it off, the BNB/USDT pair could dive to $239 and then to $216.

Contrarily, if the bulls push the price above the 20-day EMA, the pair could rise to the overhead resistance at $300. The bulls will have to clear this hurdle to open the doors for a possible rally to $338.

XRP (XRP) is facing selling near the downtrend line. This suggests that the bears are trying to build upon their advantage and pull the price below the immediate support of $0.36.

The downsloping 20-day EMA of $0.41 and the RSI in the negative territory indicate that the path of least resistance could be to the downside. If the $0.36 level gives way, the XRP/USDT pair could plunge to $0.32.

To invalidate this bearish view, buyers will have to overcome the stiff challenge in the zone between the downtrend line and $0.41. If that happens, the pair could pick up momentum and rally toward the 50-day SMA of $0.45.

Cardano (ADA) remains in a strong downtrend and the bears are trying to sink the price below the crucial support at $0.31. However, the bulls are likely to have other plans and they may try to defend this level aggressively.

Any relief rally is likely to face stiff resistance in the zone between $0.35 and the 20-day EMA of $0.36. If the price turns down from this zone, the likelihood of a break below $0.31 increases. The ADA/USDT pair could then plummet to the support line. This is an important level to keep an eye on because if it cracks, the next stop could be $0.25.

This negative view could invalidate in the near term if buyers push the price above the 20-day EMA. The pair could then rise to the downtrend line. A break and close above this resistance could suggest a potential trend change.

Dogecoin (DOGE) has been trading between the moving averages for the past few days. This suggests that the bulls are buying the dips to the 50-day SMA of $0.08, and the bears are selling the relief rallies to the 20-day EMA ($0.09).

The downsloping 20-day EMA and the RSI just below the midpoint indicate a minor advantage to the bears. If the price turns down and slips below the 50-day SMA, the DOGE/USDT pair could drop to $0.07 and later to $0.06.

The bulls are likely to have other plans as they will try to push and sustain the price above the overhead resistance at the 20-day EMA. If they succeed, the pair could start a stronger recovery and rally toward $0.12.

After trading between the moving averages for the past few days, Polygon (MATIC) closed below the 50-day SMA of $0.89 on Nov. 17. Buyers tried to push the price back above the 50-day SMA on Nov. 18 but are facing stiff resistance from the bears.

If buyers push the price back above the 50-day SMA, the MATIC/USDT pair could rise to the 20-day EMA of $0.95. The bears are likely to mount a strong defense at this level, but if the bulls overcome this barrier, the pair could rally to $1.05.

Alternatively, if the price fails to rise above the moving averages, it will suggest that the sentiment remains negative and traders are selling on rallies. That could increase the likelihood of a drop to the uptrend line.

Related: Binance sees record 138K BTC inflows as opinions differ on what Bitcoin price will do next

The price action of the past few days has formed a pennant, which generally acts as a continuation pattern. The downsloping moving averages and the RSI in the negative territory indicate that sellers have the edge in Polkadot (DOT).

If the price turns down and breaks below the pennant, the selling could pick up. The DOT/USDT pair could start the next leg of the downtrend on a break below $5.32. The next support on the downside is at $4.32.

Conversely, if the price continues higher and breaks above the pennant, it will invalidate the bearish setup. The pair could then rise to the 50-day SMA of $6.22. A break and close above this level could suggest that the short-term downturn could be over.

The bulls will have to push and sustain the price above the 50-day SMA to gain the upper hand. If they manage to do that, the UNI/USDT pair could attempt a rally to $7.36 and thereafter to $7.79.

The long wick on the Nov. 18 candlestick shows that the bears are defending the moving averages. The downsloping 20-day EMA of $6.20 and the RSI just below the midpoint suggest that the bears are at an advantage. A break and close below $5.66 may clear the path for a retest of $5.14.

Litecoin (LTC) broke and closed above the 20-day EMA of $59 on Nov. 17 and the RSI jumped into positive territory, indicating that the bulls have a slight edge.

The up-move is likely to face stiff resistance at $65. If the price turns down from this level, the LTC/USDT pair could again drop toward the moving averages.

Contrary to this assumption, if buyers drive and sustain the price above $65, the bullish momentum could pick up and the pair could attempt a rally to the overhead resistance at $75.

The bears are expected to defend this level with all their might. If the price turns down from $75, it will suggest that the pair may extend its stay inside the $46 to $75 range for a few more days.