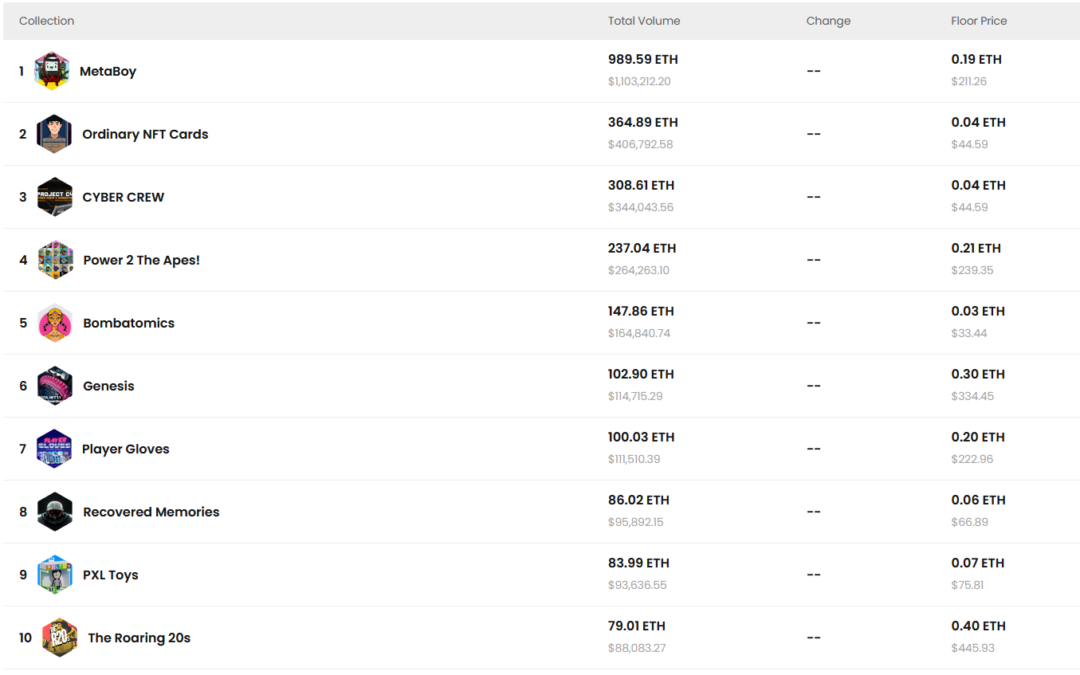 GameStop’s new nonfungible token (NFT) marketplace took home roughly $44,500 from transaction fees in the first 24 hours after it launched via a public beta on Monday.

GameStop NFT reportedly generated around $1.98 million worth of NFT sales on its first full day of business. As the platform charges a 2.25% fee on NFT sales, this equates to roughly $44,500 worth of fees.

While that sum may seem underwhelming, considering it would represent just 0.27% of GameStop’s daily revenue for 2021, it depends on the perspective. According to gaming news outlet Kotaku, GameStop had 4,816 stores across the U.S. at the start of 2021, which on average accounted for $3,426 worth of daily net sales for the company.

To provide further contrast, despite much anticipation in the lead-up to its launch in May, Coinbase NFT generated just $75,000 worth of NFT sales on its first day and took roughly a month to generate $1 million worth of sales volume. Coinbase NFT also offered zero fees to attract new users that month.

GameStop NFT, which is based on Ethereum layer-2 Loopring, is currently home to a long list of new and unknown NFT projects. However, it will soon be home to several projects from Ethereum layer-2 scaling solution, Immutable X such as Gods Unchained and Guild of Guardians. The duo partnered back in February to develop NFT games together.

At this stage, the MetaBoy NFT project depicting animated GameBoy-like console avatars is the marketplace’s top-selling collection so far and has generated 989.597 Ether (ETH) worth of volume, or $1.1 million at the time of writing.

When game devs attack: ‘Why NFTs are a nightmare’

Video game developer Mark Venturelli launched a surprise attack on NFTs during Brazil’s International Games Festival on Friday. The event was sponsored by multiple NFT/blockchain companies such as Lakea and Ripio.

Venturelli, known for his work on Chroma Squad, was penciled in to provide a virtual presentation on the future of gaming. However, after introducing himself, he promptly switched gears by launching into a tirade about “why NFTs are a nightmare.”

Venturelli’s presentation, which also has an English version, essentially argues that the introduction of speculative economic activity via NFTs will end up ruining the experience for people who just want to play games for fun.

During an interview with PC Gamer on Monday, Venturelli said:

“What’s actually going to happen is that organized groups are going to operate and scale with ever-diminishing margins, and just push out everybody else. Because that’s what happens. If you play EVE Online or Runescape, or any other game that simulates economy, that’s what happens.”

“Organized groups are going to fucking crush you. What actually is going to happen is that if you just naively play a game and have fun—imagine that—then you want to sell your stuff, your stuff is not going to be worth anything,” he added.

Tony Hawk drops in… to the Metaverse

Skateboarding icon Tony Hawk has partnered up with The Sandbox to build the “biggest skatepark” in the Metaverse.

The move was announced on Wednesday, and early previews show users socializing at Hawk’s skatepark and the ability to build customized courses their avatars can skate around.

Specifics are sparse at this stage, but Hawk noted that it will be the “biggest skatepark” to hit the Metaverse. The deal marks another notable mainstream partnership for The Sandbox this week after Playboy announced that it was launching the MetaMansion on the platform.

Coming soon to The Sandbox: alongside @Autograph, I’m helping to create the biggest skatepark in the #metaverse. Stay tuned for updates. pic.twitter.com/0R2ODsR4qt

Limewire is back with a bang

Limewire, the brand famous for providing file sharing/pirated music between 2000 and 2010, is trending on Twitter this week following its relaunch as a music and entertainment-focused NFT platform.

Limewire is trending, and no it’s not the Limewire that used to give your computer viruses. The company has now rebranded as a music NFT marketplace. Now that Limewire has released its new promo, the internet has some thoughts (: @limewire) pic.twitter.com/RB4Gp7o2XE

The platform launched on July 7 and has nothing to do with the torrent software apart from purchasing the rights to use the name. It has partnered with iconic musicians from the 2000’s such as Soulja Boy to spread the word.

Many people on Twitter have since had fun pointing out the irony of Limewire going from a music pirating platform to selling NFTs, in which their artwork can easily be “stolen” via a right-click and save. Limewire has joined in on the fun, however, by retweeting such memes.

Related: UK court allows lawsuit to be delivered via NFT

Blockchain analytics service Nansen published its NFT Indexes Report for the second quarter of 2022, with the data showing June recorded the lowest figure of the calendar year despite buyers remaining consistent.

China’s biggest city Shanghai officially intends to boost the development of innovations such as blockchain, NFTs, the Metaverse and Web3 during its next five-year plan.