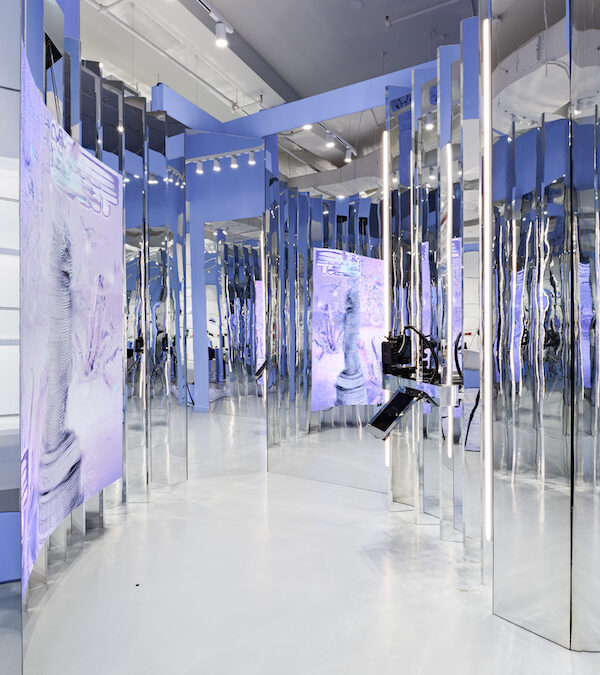 Nonfungible tokens (NFTs) have taken the world by storm over the last year. Digital collectibles that were characterized solely as CryptoKitties in 2017 have since evolved into famous pieces of art, digitized music, high-end fashion for the Metaverse and a way for communities to connect with others across the globe.

Even with the current crypto bear market, recent findings from the research firm Security.org found that NFT ownership has doubled over the last year, rising from an estimated 4.6 million people to 9.3 million people. The report also discovered that while the vast majority of Americans are not ready to purchase NFTs, about 16.3 million potential customers are likely to buy nonfungible tokens in the next 12 months.

This was recently demonstrated by the luxury Italian brand Salvatore Ferragamo. Ferragamo’s new concept store opened on June 24, 2022, in New York’s Soho neighborhood, the day after NFT NYC concluded. From the outside, the Ferragamo store located at 63 Greene Street appears ordinary, but once consumers step inside, they are able to experience Web3 firsthand via immersive shopping features.

Daniella Vitale, CEO of Ferragamo North America, told Cointelegraph during a preview of the store that the Soho location is merging technology with the world of luxury by incorporating an NFT installation alongside a custom hologram sneaker program. She said:

“Everyone is always talking about NFTs, so we wanted to bring an actual experience into the Soho store that allows people to create their own NFTs. We hope to acquire new customers that are well versed in Web3, but this is also about getting our existing customers to be a part of this world. I think this will be a huge success.”

Vitale added that Ferragamo’s NFT installation — which was created in partnership with digital artist Shxpir (pronounced like the English poet and playwright Shakespeare) — is the first of its kind, noting that no other Ferragamo store contains such a feature.

“We didn’t want our Soho store to be so static — we wanted it to have a technology angle. The NFT booth was integrated directly into the store design to encompass the entire shopping experience,” she said. Vitale added that she hopes these immersive features allow customers to learn about Web3 technology rather than be intimidated by the advancing sector.

In order to ensure this, a representative from the multidisciplinary studio De-Yan — which worked with Ferragamo on the installations and has helped with immersive projects for Louis Vuitton and Dior — told Cointelegraph that minting a Ferragamo NFT does not cost customers anything.

“This will be the first NFT for a lot of people, so Ferragamo will be paying all the Ether gas fees on transfers.” In addition, he noted that representatives will be available to help customers throughout the entire minting process. He further shared that the NFT installation will be ongoing but that the store is limiting the inaugural collection to 256 NFTs. “There are 972 potential combinations the NFTs can take, but only 256 can be minted as of now,” he said.

In terms of the actual minting process, he explained that the experience is entirely immersive, noting that the NFT installation is enclosed in a mirrored room to ensure that customers get a 360-degree view of the NFT they are creating.

“Customers get to customize their NFT and are then able to film a video with that NFT to share on social media afterward,” he said. Following the mint, customers are sent a claim email that asks for their wallet address. “The NFT is then sent to their Ethereum address and will appear in their OpenSea account a day or so later,” he explained.

While Ferragamo may be one of the first luxury fashion brands to offer in-store NFT minting, the Web3 media and entertainment brand known as Doodles provided its community with a similar feature. Doodles set up an offsite house during NFT NYC 2022 to allow fans and community members a chance to mint the newest NFT drop, view Doodles’ artwork and purchase exclusive merchandise like sweatshirts and t-shirts. Julian Holguin, chief operating officer at Doodles, told Cointelegraph that the goal of the Doodles house was to elevate the brand by allowing people to experience everything in real life. He said:

“We just announced the pre-sale for our second NFT drop, which is what is happening here. People are here to physically mint a ‘Genesis Box,’ which is a crate of wearables that will be the next level of rarity. People can buy a wearable today at a fixed price to reserve their spot for this mint.”

To date, the Doodles NFT project has generated around $500 million worth of secondary sales since its launch in October 2021. With over 6,000 Doodles’ owners, Holguin explained that the minting experience should be “fun and joyful,” noting that this is what the brand stands for. “I believe that when people can touch and feel things it creates an emotional response. They can then experience those emotions online,” he said.

Like the Ferragamo NFT installation, the Doodles House at NFT NYC hosted a machine for guests to mint their Genesis Box NFT reservation. Upon completion, a golden card resembling a credit card was deposited from the machine, which guests could take as a keepsake. Users were required to pay for the gas fees, which cost about $127 dollars and could be purchased using a credit card.

The importance of bringing NFTs to life

For instance, John Crain, co-founder and CEO of SuperRare — a digital art marketplace launched in 2018 — told Cointelegraph that having a physical art gallery associated with NFTs presents a great opportunity for both crypto-natives and the crypto-curious to experience NFTs. This in mind, SuperRare opened its first physical art gallery in May this year, which is also located in New York’s Soho neighborhood. Crain said:

“I think people see headlines about celebrities buying Bored Apes, which is exciting, but at the same time there is a cultural renaissance happening where independent artists are being empowered by this technology. It’s hard to see this, which is why it’s important to have a physical gallery where the community can experience the art first hand, while also meeting the artists and curators.”

Crain shared that the SuperRare gallery in Soho will be open till the end of August, with the possibility of extending or expanding to other cities. “We are hosting different exhibitions every two weeks, which is a great way to promote community building while adding a deeper context to the art displayed. This is hard to get from a purely digital experience,” he remarked.

De-Yan’s representative added that he believes the mix of technology and customization will be important for the retail sector in the future. He said:

“Ferragamo has chosen a particular approach that we think is a good start. I wouldn’t be surprised if we saw other brands following our lead. That’s the fun part about the NFT space — right now everyone is thinking about NFTs as pictures or videos, but there is a whole physical and application layer to it.”

While bringing digital NFTs alive in physical spaces could be revolutionary, it’s also important to point out challenges that may hamper adoption. For example, while in-store mints may be fun and interactive, users that are new to the crypto space may still find it difficult, especially people of older generations.

According to the findings from Security.org, individuals between the ages of 25 to 34 were more likely to purchase NFTs in the next 12 months compared with older or younger generations. The research also found that men are slightly more interested than women in purchasing NFTs in the next year.

Recent: How the Metaverse can revolutionize the fashion industry

Given this, fashion brands like Ferragamo may have difficulty getting customers to obtain NFTs. In order to prevent this from happening, De-Yan’s representative explained that Ferragamo is sharing instructions on how people can get started with NFTs. “MetaMask is probably the easiest way. Ferragamo is also initiating the transfer, so all a customer needs is a wallet address,” he said.

The fact that Ferragamo is paying for gas fees is indeed appealing, as Security.org also found that the primary problem with NFTs continues to be the high costs associated with minting. Given this, Vitale noted that the current crypto bear market will unlikely deter customers from creating Ferragamo NFTs. “Paying for gas fees is an important gesture, especially in moments like this,” she said.