Metaverse promises: Future of Web3 or just a market gimmick? 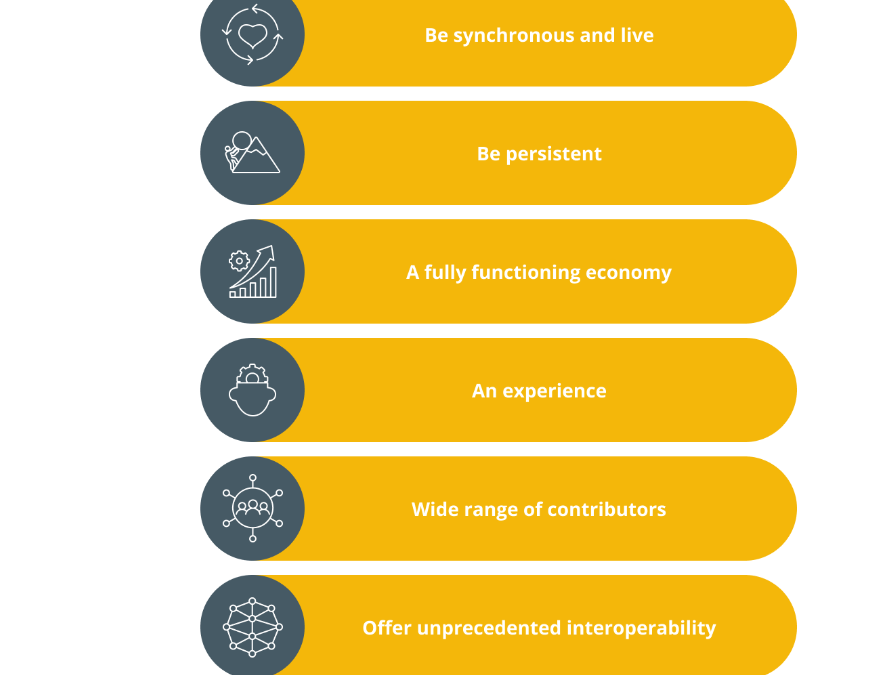 The Metaverse as a concept is an attempt to fuse physical reality, augmented reality (AR) and virtual reality (VR) into one seamless and immersive experience.

The term “metaverse” was first used in Neil Stephenson’s 1982 cyberpunk novel Snow Crash. Stephenson’s metaverse was a virtual place where characters could go to escape a dreary totalitarian reality. Some of the key attributes of the Metaverse include:

Even before the Metaverse became a phenomenon amid the nonfungible token (NFT) craze and crypto market boom, the concept was already in focus with the likes of Facebook, now Meta, Apple, Microsoft, Samsung and several other leading companies investing heavily in AR technology since the early 2010s.

In 2014, Meta acquired Oculus VR in a $2 billion deal with of focus on developing augmented and virtual reality-based games. In the same year, Sony and Samsung announced they were creating their own VR headsets, and Google released Google Glass AR glasses.

In 2020, Apple introduced. Lidar (Light Detection and Ranging) to iPhones and iPods, which offered better depth scanning for photos and introduced AR features. The technology is also paving the way for mixed-reality headsets in the future. In 2021, Facebook rebranded itself to Meta to shift from purely social media to leading the metaverse race.

With a downturn in crypto markets, both NFTs and the Metaverse saw a rapid decline in interest and capital flow. Google trend data suggests metaverse was piquing interest until January 2022. However, as the bear market progressed, wiping out nearly 70% of the market valuation, interest in the Metaverse and NFTs have taken a dip.

There has been a drastic change in the approach from brands that, at the start of the year, were all about the Metaverse and NFTs. Recently, Tinder, the popular dating app, has cut down its metaverse plans in the wake of disappointing Q2 earnings.

Efforts at creating a futuristic AR-based virtual world are presently at a very nascent stage, and some experts believe that current technological barriers both at the hardware and software levels are partially to blame. Lili Zhao, director of ecosystem growth at Neo Blockchain, told Cointelegraph:

“The Metaverse is still in its infancy, so existing projects are industry pioneers which mean trials and errors before it reaches product maturity. Currently, neither the hardware nor the software infrastructure is adequate to unleash the full potential of Metaverse. This is an area of technological innovation with fundamental growth opportunities for years to come, regardless of the market condition which is more driven by cycles and sentiment.”

Sandra Helou, the head of metaverse and NFT at Zilliqa, said that people view the Metaverse as a new concept. However, she believes the Metaverse is just an enhanced iteration of the internet and the more we embrace it as a new form of engagement, the less threatening it will seem. She told Cointelegraph:

“The keyboard never replaced the pen and the pen never replaced the pencil. Web3 shouldn’t be viewed as a replacement for Web2 but rather as an enhancer focusing on greater engagement and connectivity. The future of the Metaverse should look at combining elements of the physical and digital worlds through seamless integration and interactivity accessible for all regardless of industry.”

The critique of the Metaverse

The Metaverse as a concept has divided the world into two halves, where on one side, the likes of Meta, Microsoft, Sony and Samsung are all-in on the technology, calling it the future of the internet, while on the other hand, the likes of Elon Musk and Ethereum co-founder Vitalik Buterin believe the present forms of the Metaverse are nothing more than corporate fantasy.

Buterin recently said that existing attempts by corporations to create a metaverse are not “going anywhere,” stating that Meta will “misfire.” Buterin’s comments came in the wake of Meta’s $2 billion quarterly loss on its metaverse division.

Marius Ciubotariu, the co-founder of decentralized finance stablecoin issuer Hubble Protocol, told Cointelegraph that the involvement of companies such as Meta has given a bad outlook to the industry in recent times, stating, “Companies like Meta are betting on the Metaverse big time. Unfortunately, this has led to many having negative or conflicting ideas about what the Metaverse is.”

“Meta, like some of its competitors that have publicly embraced the Metaverse, are selling it as nothing more than an extension of social media data mining, where individuals have no control over their personal information and data. These centralized metaverses contradict principles of decentralization such as immutability, censorship resistance and permissionless access.”

He added that the Metaverse has a bright future, but established projects like The Sandbox and Decentraland will likely take the bulk of the market share, and smaller, underfunded projects may not be able to deliver on their enormous promise due to lack of resources, time, experience, funding and the difficulty of development. He went on to predict that “similar to the 2017 initial coin offering phase, most of these projects will either not see the light of day or fail to attain the necessary user base to maintain a healthy funding margin.”

Other critics believe that centralized metaverses such as those proposed by Meta and Microsoft may affect the decentralized ownership of goods and services within those ecosystems.

Ben Advia, founder and CEO of crypto-collectible and metaverse platform Dissrup, explained the current skepticism around metaverses and how it could potentially change. He told Cointelegraph that even though there have been many attempts to exploit the enthusiasm surrounding Web3 and the Metaverse for corporate and personal gain, it would be cynical to dismiss the efforts being made by many to build something genuinely revolutionary:

“It is important to remember that the Metaverse in its ‘true’ form was never going to arrive perfectly polished and flawlessly executed, just as it took time for us to harvest the potential of the internet. The Metaverse takes time to develop into the idealized web-centric utopia that we have all been discussing and envisioning over the past couple of years.”

“Until such a time, the concept will continue to be subject to criticism and skepticism, forever associated with the laughable graphics and clunky interfaces of proto-metaverse spaces, while we continue to overlook how it might change the way we function and exist in this emerging hybrid digital/physical space,” he added.

Kirk Allen, CEO of metaverse aggregator Kaloscope, told Cointelegraph that the hype around the market and involvement of corporate giants such as Meta and Microsoft have hampered the vision around the concept. He explained:

“There is a ‘hype’ within multiple sectors, excited and deeming that the next big thing for Web3 is the Metaverse. Without fully understanding what ‘metaverse’ means, most people are just following suit as Facebook re-branded into Meta. Among skeptics, the term ‘metaverse’ sounds too optimistic, and is commonly questioned for lacking in definition. Having said that, the metaverse is not a badly executed idea or a dream. In fact, if you want to think of it this way, it is in the cocoon stage, and soon will emerge in many more ways to the general public in business and communities.”

Looking beyond the hype

The growing interest of tech giants in the Metaverse has raised concerns about centralization and monopoly, but it is important to note that their billions worth of investment caused a ripple effect for the industry. Their involvement attracts more attention to the sector along with more investment and more tools will reach the market. Such development tools will save entrepreneurs the time needed to create new technologies and will allow them to focus on their innovations.

While interest in the Metaverse has cooled, it has not disappeared entirely, especially in the United Arab Emirates. Crown Prince Sheikh Hamdan bin Mohammed bin Rashid Al Maktoum on July 20, announced that Dubai will be hosting a global event to bring metaverse experts together in September 2023. The country is planning to ramp up its efforts and create 40,000 new jobs around the Metaverse, showing that some governments are beginning to understand how valuable this sector can become.

“There has been no clear-cut winner on which company will have the biggest metaverse yet, but there is no doubt virtual experiences will be a part of our future and the Metaverse will play a massive role in our children’s future.”

As the Metaverse brings the online and offline worlds closer together, it offers new opportunities for businesses to scale and individuals to connect. For example, engaging with a virtual 3D avatar customer service agent rather than a corporate employee in a chat window may build a more immersive and memorable customer experience.

For an avid video gamer, a metaverse may be the utopia they are hoping for, as they get to conveniently switch between online gaming and virtual socializing. With digital identities, there is also potential for people to explore alternate characters for themselves.

Sports leagues could integrate VR/metaverse capabilities to increase viewership as well as an NFT component to reward viewers. Shopping malls and stores have already created virtual stores in which one can shop at home and virtually try on wearables.

The future of the Metaverse will depend on stakeholders and how they build the future of Web3. The current form may look underpromising due to a lack of technological innovations, but industry leaders are sure that the Metaverse concept will take center stage in the next iteration of the internet.