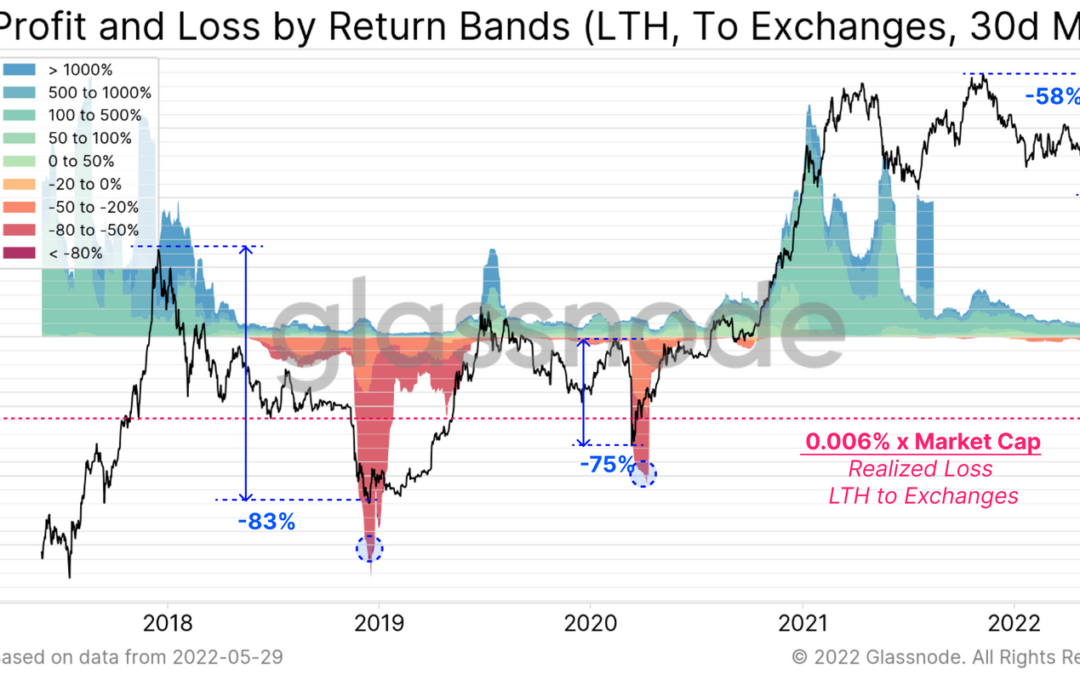 Long-term Bitcoin holders are sitting on their largest losses since the March 2020 capitulation and the 2018-2019 bear market but may have to keep waiting for relief.

Calculated by measuring the value of coins deposited to exchanges, aggregated realized losses from long-term holders (LTH) of Bitcoin (BTC) exceeded 0.006% of the market capitalization by May 29 according to Glassnode’s The Week Onchain report from June 6.

However, the dramatic losses may continue for some time if historic loss patterns from previous bear markets are to be repeated. From 2018 to 2019, LTH losses reached a peak of 0.015% of the market cap, and those losses extended for about a year. The current losses to long-termers have only been observed for about a month.

Glassnode writes that LTH losses now resemble those from previous bear markets, but that they need to continue for a longer period of time before being truly comparable. The report states:

“The LTH losses on coins deposited to exchanges have now reached a magnitude comparable to previous bear markets. However, we do not yet have the duration component.”

Glassnode defines LTH as a holder that has not moved their coins for at least 155 days. However, anyone that bought BTC before December 2019 will still be up on their investment … for now.

It is also worth noting that in both 2019 and 2020, prices rapidly recovered by bouncing off their lows. Cointelegraph reported on Tuesday that there will likely be a capitulation event before any significant price recovery can take place.

Despite the gloomy price outlook, inflows to digital asset investment products such as Bitcoin exchange-traded funds (ETF) topped $100 million last week. CoinShares June 6 report highlights that most of the inflows were from the Americas, suggesting that European investors are still bearish at the moment.

CoinShares also pointed out the difference in exchange flows between BTC and Ethereum (ETH). BTC exchange inflows have netted about $506 million in value through 2022 so far, whereas ETH has had net outflows of $357 million. This suggests that market sentiment for ETH is much lower than that for BTC at the moment.