Large institutions sold $5.5B in BTC since May — and we’re still here 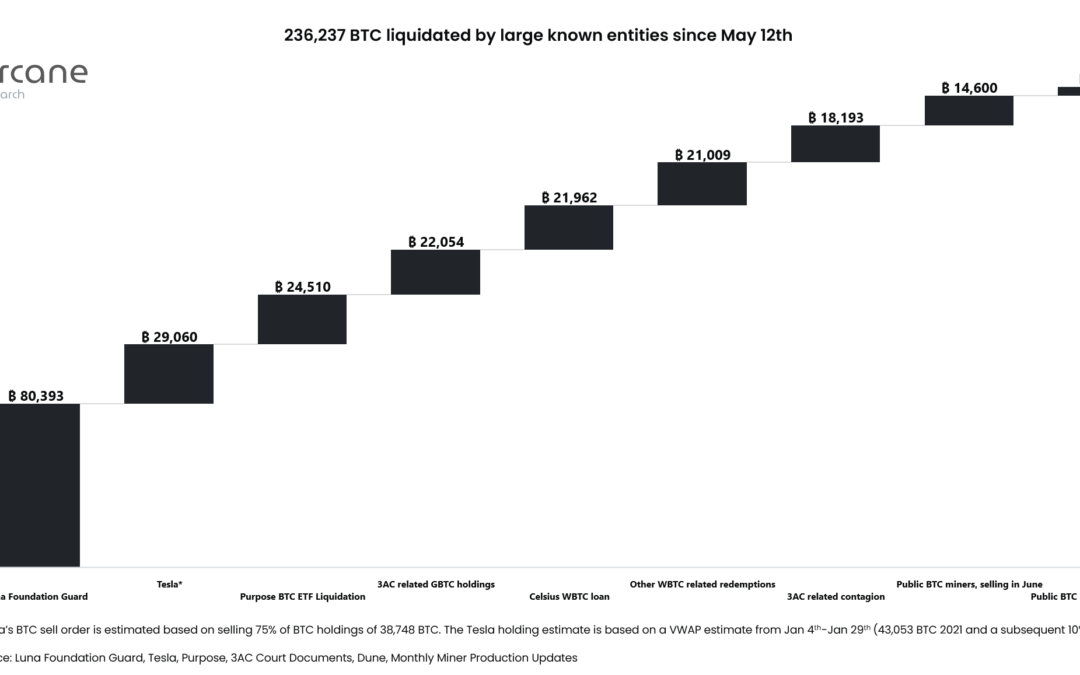 A Twitter thread from Arcane Research analyst Vetle Lunde details how and when many institutional Bitcoin holders began selling their stacks. Lunde stated that “it all started with Do Kwon.”

The Luna Foundation Guard (LFG), which controlled funds for the Terra project, dumped 80,081 BTC in a failed effort to protect the peg of its native TerraUSD Classic (USTC) stablecoin in May.

Terra’s collapse appears to have put pressure on some Bitcoin miners to sell. Lunde estimates that miners sold 19,056 coins between May and June. In some cases, miners were selling more than their monthly production, likely drawing from reserves.

Lunde noted that as miner selling peaked, Elon Musk’s Tesla also hit the red button and sold 29,060 BTC by the end of Q2. At the same time, the Three Arrows Capital (3AC) crypto investment firm was over-leveraged and owed lenders 18,193 BTC and other coins equivalent to 22,054 BTC.

Trading volumes have also remained higher through the 2022 market downturn compared to the peak of the 2017 bull market. On December 17, 2017, Bitcoin’s daily trading volume reached a cycle peak of $12 billion, while daily volume in July 2022 has been above $20 billion, according to CoinGecko.

CEO of Singapore-based market maker Presto Labs Yongjin Kim agreed with Lunde that liquidations from 3AC and others caused the significant price drop in June but believes the BTC price will return to $30,000 within the next few months.

He told Cointelegraph on Thursday that “those liquidations pushed Bitcoin price below the fundamental equilibrium price,” leading him to believe that prices will return “to $30,000 in the next few months.”

Kim added that it will take time for retail investors to regain their confidence in crypto after what they endured over the past few months and that institutional investments will rise again:

“I think the retail sentiment is completely broken, so it will take some time before we restore confidence in the market. But there will be some reversal by the end of this year counteracting the liquidations.”

Lunde concluded his thread by stating:

“I tend to lean in favor of forced selling and contagion-related uncertainty being done for now. We will likely slump, pump, and dump in choppy conditions in the coming period.”