KYC to stake your ETH? It’s probably coming to the US 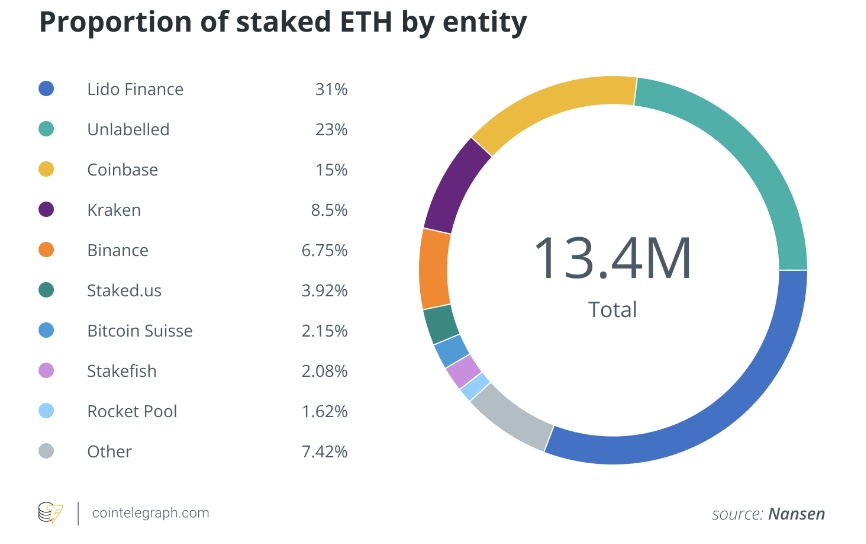 Over the last few years, the cryptocurrency industry has been a primary target for regulators in the United States.

The legal battle between Ripple and the United States Securities and Exchange Commission (SEC), Nexo’s lawsuit with the securities regulators of eight states, and the scrutiny targeting Coinbase’s Lend program last year are only a few high-profile examples. This year, even Kim Kardashian had first-hand experience with regulatory scrutiny after agreeing to pay a $1.26 million fine for promoting the dubious crypto project EthereumMax.

While Ethereum developers intended to pave the way for key network upgrades in the future, it seems like the recent Merge has further complicated matters between crypto projects and U.S. regulators.

Ethereum: Too substantial for the crypto market?

On Sept. 15 – the same day Ethereum’s Merge took place – SEC Chairman Gary Gensler stated during a congressional hearing that proof-of-stake (PoS) digital assets could be considered securities. Gensler said his reasoning was that holders can earn revenue by staking PoS coins, which could mean that there is an “expectation of profit to be derived from the efforts of others.” The latter is one of the essential parts of the Howey test, used by the SEC and other U.S. authorities to determine whether an asset is an investment contract and falls under federal securities law since it was passed into law in 1946.

As you may already know, Ethereum has shifted from the mining-based proof-of-work (PoW) to PoS, requiring validators to stake Ether (ETH) to add new blocks to the network. In other words, this means that Ether could fall under the Securities Act of 1933, which would require the project to register with the SEC and comply with strict standards to safeguard investors.

Related: Federal regulators are preparing to pass judgment on Ethereum

Gensler argued that intermediaries like crypto exchanges and other providers offering staking services “look very similar” to lending. And, cryptocurrency lending is a sector that has been under heavy SEC scrutiny, especially if we consider the agency’s $100 million fines against BlockFi in February.

In fact, Gensler’s latter argument is highly relevant in the case of Ethereum, where one has to stake 32 ETH (worth $42,336 at the current price of $1,323 per coin) to become a validator. Since this is a considerable sum for many, most users are turning to staking providers to stake their digital assets on their behalf to avoid this capital requirement in exchange for a fee.

At the same time, this could mean that, at some point, large centralized providers will increase their control over the network. Thus, by falling under the SEC’s supervision, there’s a chance the agency could prohibit them from validating individual transactions (censorship), which will lead to the fact that such transactions will take more time to be confirmed. That said, confirmation speed should be the most significant issue here, as there will always be some validators that will subsequently confirm the transaction.

In this setting, Ethereum, as one of the major networks for decentralized finance (DeFi), would be the main lever for regulatory policy. Tokens such as USD Coin (USDC) and many others contain blacklisting and blocking mechanisms at the development level, as opposed to the DeFi market in general — so it makes sense that validators and the MEV market will play the role of leverage tools. In the short term, however, this is more of a scare since there are too many validators, and no one can control this process at a reasonable cost.

Regarding the above, U.S. regulators may intend to oblige those node validators under their jurisdiction to implement Know Your Customer (KYC) and Anti-Money Laundering (AML) procedures for validating transactions.

Ethereum’s Merge gives opportunities for the SEC to act. How?

In addition to the Howey test argument, the SEC also claims that ETH transactions fall under U.S. jurisdiction due to the high concentration of the network’s nodes in the United States. If this statement turns out to be accurate and finds further development across the nation, this would mean that the U.S. Treasury’s Financial Crimes Enforcement Network (FinCEN) will require all businesses operating on the Ethereum blockchain to comply with KYC and AML requirements.

In practice, this means that customers will have to verify their identities and residencies, as well as provide further information to service providers before they can start using a DeFi service. This significantly increases the burden for crypto projects (and one could argue that this process would go against the idea of decentralized finance). However, regulatory compliance will facilitate trust between investors and providers, which will help attract investment from institutional clients.

That said, it’s vital to mention the SEC’s controversy regarding its approach, communication and decisions about crypto regulation, which digital asset market players have heavily criticized. BlockFi’s case is an excellent example. The SEC announced actions against the company over its failure to register high-yield interest accounts that the commission classified as securities. According to the case’s documents, one of the agency’s requirements was to bring BlockFi’s business activity into compliance with the Investment Company Act of 1940.

As a result, BlockFi ended up on the auction block, and two other companies with similar businesses went belly up — these were Ripple general counsel Stu Alderoty’s words.

Thus, a situation has arisen where the SEC used the legislation of 1940 to regulate modern and not yet fully developed technology, which is absurd.

Furthermore, the SEC’s statement that all Ether falls under U.S. jurisdiction is, to put it mildly, untrue. (If it were, it would be convenient for the agency.) The SEC’s logic here is that the Ethereum blockchain’s node network is more densely clustered in the U.S. than anywhere else, so all ETH transactions worldwide could be viewed as if they were of American origin.

But, according to Etherscan, the U.S. is presently home to a little more than 46% of all Ethereum nodes — not even a simple majority. Based on the SEC’s statement, one could argue that only the European Union should regulate Bitcoin (BTC). Of course, the latter argument is just as absurd as the agency’s claim.

I believe these statements result from the SEC lawyers’ very rough understanding of cryptocurrencies. But, we cannot rule out the previous tendencies of the SEC to regulate through enforcement.

Regulatory compliance will come with a big sacrifice for Ethereum

U.S. regulators are increasingly expressing concerns about the huge sums circulating in DeFi without any control. As the Ethereum blockchain serves as the primary chain for most tokens, its recent shift from PoW to PoS may be used as an argument for their attempts to influence (at least a part of) the decentralized market.

If the SEC and other U.S. regulators succeed in the latter, it could restructure DeFi such that another evolutionary blockchain becomes the leader. But, what is certain in the case of full Ethereum regulation is that traditional banks and investment funds will boost ETH’s usage as an asset for investments and payment means.

Considering all this, providing any timeline is challenging as such statements from the SEC are quite recent and raw at the moment. Let’s wait and see what further actions U.S. regulators will take in the near future and whether they will impact the KYC and AML procedures of the crypto space as well.

Slava Demchuk is the CEO and co-founder of AMLBot, a company that monitors a global database of cryptocurrency addresses to assist businesses and private users with compliance requirements.

This article is for general information purposes and is not intended to be and should not be taken as legal or investment advice. The views, thoughts, and opinions expressed here are the author’s alone and do not necessarily reflect or represent the views and opinions of Cointelegraph.