Is DeFi back? GMX rallies toward all-time high and LOOKS price gains 30% 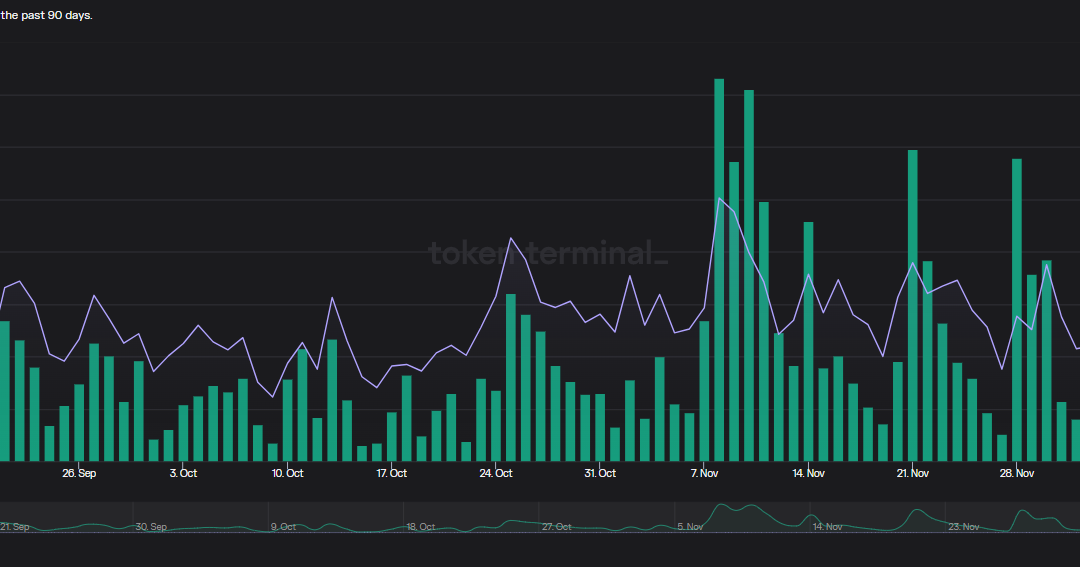 In a recent blog post, cryptocurrency legend and former BitMEX CEO Arthur Hayes mentioned he holds sizable bags of GMX and LOOKS tokens. According to Hayes, his main reasoning for investing in both was their platform revenue and their potential to outperform standard Treasury bills.

Let’s take a brief look at on-chain data and compare GMX and LOOKS to competitors to determine whether Arthur’s assumption will work out.

The week prior to Nov. 16 provided decentralized finance (DeFi) with a significant influx in fees after the centralized exchange (CEX) exodus triggered by FTX’s bankruptcy. The temporary high inflows to DeFi propelled GMX to outperform Uniswap in protocol fees.

While usage of GMX may be decreasing, the token is outperforming the industry. The GMX token is only 8% away from an all-time high, after gaining 59% in the past 30-days.

Since Uniswap is the closest competitor to GMX, comparing the two protocols can show which users prefer to use for trading. Aside from the fee flip on Nov. 28, Uniswap continues to outperform GMX in terms of fee revenue and daily active users. Unlike Uniswap, GMX distributes fees to stakers of various GMX and GLP tokens.

The 90-day peak for Uniswap fees is $5.9 million, whereas GMX’s high in daily fees is only $1.4 million. The major difference in peak fees may show that GMX has reached capacity when it comes to platform usage.

The fees that GMX accrues are split 30% to GMX token holders and 70% to GLP holders. The current homepage for GMX estimates an annual percentage yield of 10% for GMX tokens and 20% for GLP tokens. While GLP would fit Hayes’ 20% annual yield goal, liquidity providers are susceptible to impairment loss and price declines, making it difficult to ensure success against the conservative Treasury bill strategy.

LooksRare, which is also the home of the LOOKS token, was also mentioned by Hayes due to the fees the NFT protocol earns. To date, NFT marketplaces, including Coinbase, have struggled to chip away at OpenSea’s market dominance.

While OpenSea seems to have a natural flow of daily active users between 35,000 and 50,000, LooksRare has a small range of 350 to 500 users. Using this metric, OpenSea is 100 times bigger than LooksRare and the trend does not seem to change over a 90-day timeframe.

Another difference between the two protocols is that OpenSea does not have a token that emits rewards through staking and inflationary minting. The rewards emission may hit Hayes’ 20% goal, but it should also be noted that LooksRare is notorious for wash trading. The primary objective of these wash trader is to gain more LOOKS tokens, but this could have the effect of diluting the price.

The recently announced UniSwap NFT aggregator could help propel LooksRare to gain more “authentic” transactions since users can purchase LooksRare NFTs without ever visiting the site.

The current fee distribution is heavily concentrated toward OpenSea. Over the past 90 days, OpenSea reached a peak of $2.5 million in daily fees, whereas during the same period LooksRare only earned over $200,000 in daily fees once.

Investigating the protocol fundamentals mentioned by Hayes are an important first step when considering investing in DeFi and altcoin. Looking at the competitive landscape for both LooksRare and GMX, it would take much more adoption for either protocol to overtake the current leaders. Furthermore, the 20% goal Hayes sets out might be a stretch when analyzing inflated emissions and token prices.