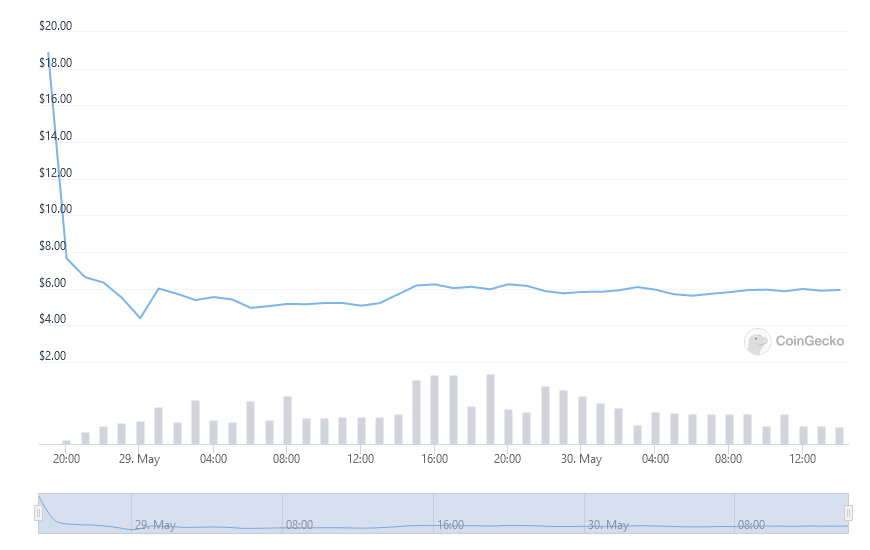 The price of Terra (LUNA) has tanked around 70% since the re-launch of the Terra ecosystem via Terra 2.0 on May 28.

According to data from CoinGecko, LUNA has dropped roughly 69% since its opening of $18.87 on Saturday to sit at around $5.71 at the time of writing.

At this stage, the sharp plummet seems to suggest a relative lack of faith in Do Kwon’s revamp moving forward, with many investors indicating on Twitter that they are instead looking to recover a small portion of their previously lost capital and wipe their hands clean of the project.

I don’t see any fundamental here & I see whatever I get as bonus since I already wrote everything off as a loss & $0.

If not that the others are vesting, I’ll sell ‘em all.

Binance is set to begin a multi-year distribution of LUNA to eligible users starting from May 31, along with listing the token for trading via its Innovation Zone, a dedicated trading zone for volatile and high-risk assets.

Some people in the community who have outlined plans to eventually purchase LUNA once the carnage is over such as “lurkaroundfind” have predicted further bloodshed once the Binance drop goes live.

Related: Bitcoin price stuck below $29K as Terra comes back from the dead

They pointed out that Binance has “15.7MM liquid LUNA, which will be available to users on Tuesday,” and suggested that investors who mainly used the Anchor Protocol will look to cash out as they have no real interest in the Terra ecosystem.

Many users had UST on Anchor via Binance at pre-attack snapshot. Many of these users never owned old LUNA and don’t care about new LUNA.

Popular influencers in the space such as Lark Davis have also noted such, telling his 988,000 Twitter follows yesterday that:

“Zero plans to buy $luna 2.0, but I will dump any airdrop if I get something on Binance.”