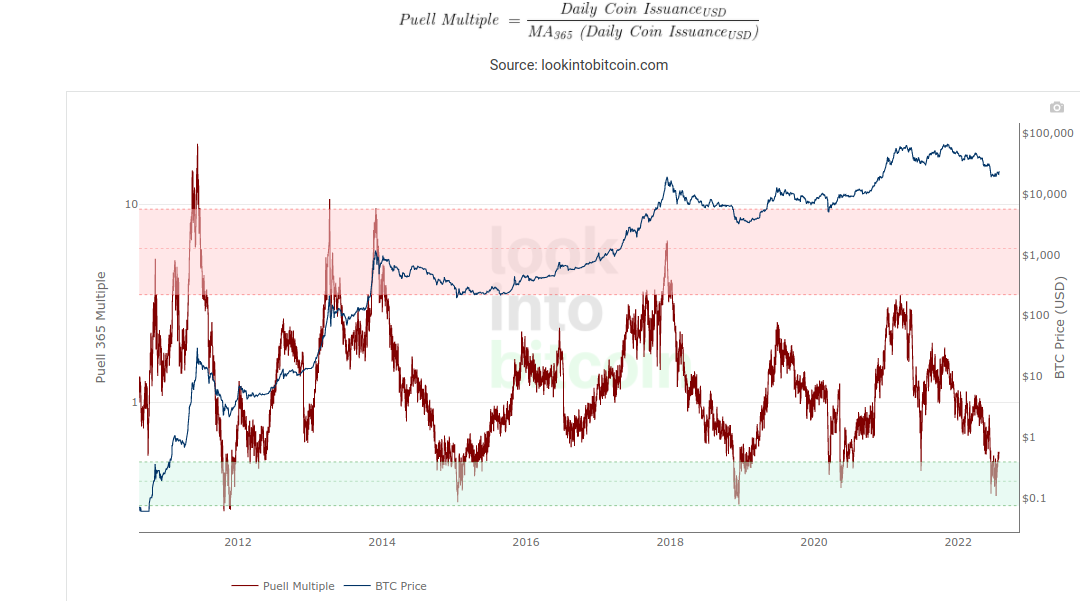 Bitcoin (BTC) is enjoying what some are calling a “bear market rally” and has gained 20% in July, but price action is still confusing analysts.

As the July monthly close approaches, the Puell Multiple has left its bottom zone, leading to hopes that the worst of the losses may be in the past.

The Puell Multiple one of the best-known on-chain Bitcoin metrics. It measures the value of mined bitcoins on a given day compared to the value of those mined in the past 365 days.

The resulting multiple is used to determine whether a day’s mined coins is particularly high or low relative to the year’s average. From that, miner profitability can be inferred, along with more general conclusions about how overbought or oversold the market is.

“Based on historical data, the breakout from this zone was accompanied by gaining bullish momentum in the price chart,” Grizzly, a contributor at on-chain analytics platform CryptoQuant, wrote in one of the firm’s “Quicktake” market updates on July 25.

The Multiple is not the only signal flashing green in current conditions. As Cointelegraph reported, accumulation trends among hodlers are also suggesting that the macro bottom is already in.

After its surprise relief bounce in the second half of this month, Bitcoin is now near its highest levels in six weeks and far from a new macro low.

As sentiment exits the “fear” zone, market watchers are pointing to unique phenomena which continue to make the 2022 bear market extremely difficult to predict with any certainty.

In another of its recent “Quicktake” research pieces, CryptoQuant noted that even price trendlines are not acting as normal this time around.

In particular, BTC/USD has crisscrossed its realized price level several times in recent weeks, something which did not occur in prior bear markets.

Realized price is the average at which the BTC supply last moved, and currently sits just below $22,000.

“The Realized Price has signaled the market bottoms in previous cycles,” CryptoQuant explained.

“More importantly, the bitcoin price did not cross the Realized Price threshold during the last two periods (134 days in 2018 and 7 days in 2020). Yet, since June 13, it crossed back and forth this level three times, which shows the uniqueness of this cycle due to unprecedented macroeconomic conditions.”

Those conditions, as Cointelegraph reported, have come in the form of forty-year highs in inflation in the United States, rampant rate hikes by the Federal Reserve and most recently signals that the U.S. economy has entered a recession.

In addition to realized price, meanwhile, Bitcoin has formed an unusual relationship to its 200-week moving average (MA) this bear market.

While normally retaining it as support with brief dips below, BTC/USD managed to flip the 200-week MA to resistance for the first time in 2022. It currently sits at around $22,800, data from Cointelegraph Markets Pro and TradingView shows.