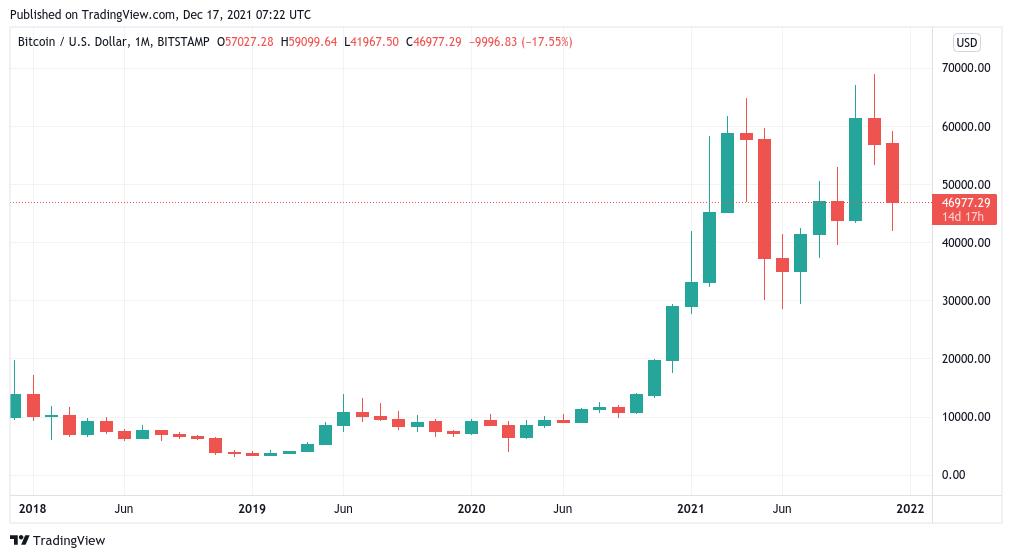 Bitcoin (BTC) may be flagging below $50,000, but its bull market is actually three years old this month.

Data from Cointelegraph Markets Pro and TradingView confirms that Bitcoin bulls have at least something to celebrate as 2021 draws to a close.

Despite disappointing when it comes to end-of-year price expectations, BTC/USD remains an order of magnitude higher than where it was even 18 months ago.

March 2020 marked a brief return to near-cycle lows in what had otherwise been a solid bull market ever since December 2018. At that time, Bitcoin capitulated to lows of $3,100 — a level that was never seen, and likely never will be seen again.

Consolidation lasted for several months afterward, with April 2019 being the watershed moment as the market climbed toward the year’s high of $13,800.

The anniversary of “peak bear” is timely, coming as analysts weigh the chances of consolidation and a slow grind upward characterizing the end of this year and the beginning of the next.

“The season where all the gains of day 1 are lost on day 2 and everything flip/flops within 24 hours, also the ideas of people on the markets.”

As Cointelegraph reported, Sept. 15 formed another birthday for Bitcoin in the form of it spending an entire year above $10,000.

Hoping for a “flush”

While a return even to $20,000 is not in the cards for the majority of market participants, analysts are not discounting the idea that Bitcoin will dip considerably again in the short term.

For popular trader Pentoshi, this could take the form of another leverage cascade to “flush” excessive speculation from the market.

Major support levels revolve around $40,000, a breach of which would put BTC/USD on course to challenge its dip from after May’s miner rout.

Conversely, a “max pain” scenario would in fact be a run higher toward $60,000, fellow trader Filbfilb argued this week.