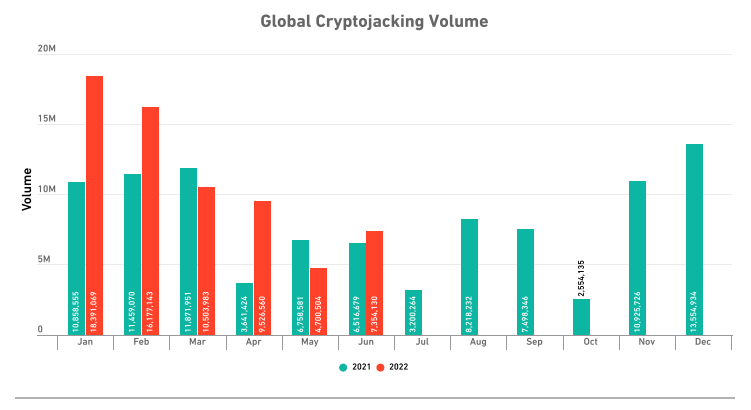 New research shows that despite falling digital asset prices, cryptojacking has reached record levels in the first half of 2022.

According to a mid-year update on cyber threats by American cybersecurity company SonicWall, global cryptojacking volumes rose by $66.7 million, or 30%, in the first half of 2022 compared with the same period last year.

Cryptojacking is a cybercrime whereby malicious actors commandeer a victim’s computer resources by infecting the machine with malware designed to mine cryptocurrencies. It is often executed through vulnerabilities in web browsers and extensions.

The report stated that the overall rise in cryptojacking can be attributed to a couple of factors.

Firstly, cybercriminals are leveraging the Log4j vulnerability to deploy attacks in the cloud. In December 2021, a critical vulnerability affecting java-based logging utility was discovered in the Open Source Library managed by software company Apache. Hackers can exploit it to gain remote access to a system.

Secondly, cryptojacking is a lower-risk attack than ransomware, which needs to be made public to succeed. Cryptojacking victims are often unaware that their computers or networks have been compromised.

Attackers also appeared to have changed their preferred targets during the period, moving from the government, healthcare and education sectors to the retail and financial sectors.

Cryptojacking attacks targeting the finance sector skyrocketed 269% in the period, more than five times greater than the second highest industry, retail, which saw attacks increase by 63%.

“The number of attacks on the finance industry is five times greater than the second highest industry — retail, which used to be at the very bottom of the list,” the researchers noted.

The researchers, however, noted that the volume cryptojacking attacks began to fall alongside the crypto markets in the first half of the year, as attacks were becoming less lucrative.

They observed a pattern of significantly higher volumes in the first quarter, followed by “cryptojacking summer slump” in Q2. The firm said that based on past trends, Q3 volumes will likely also be low, with attacks likely to pick up again in Q4.

This year’s summer decline has also been attributed to a fall in crypto asset prices, as markets have shrunk by 57% since the beginning of the year.