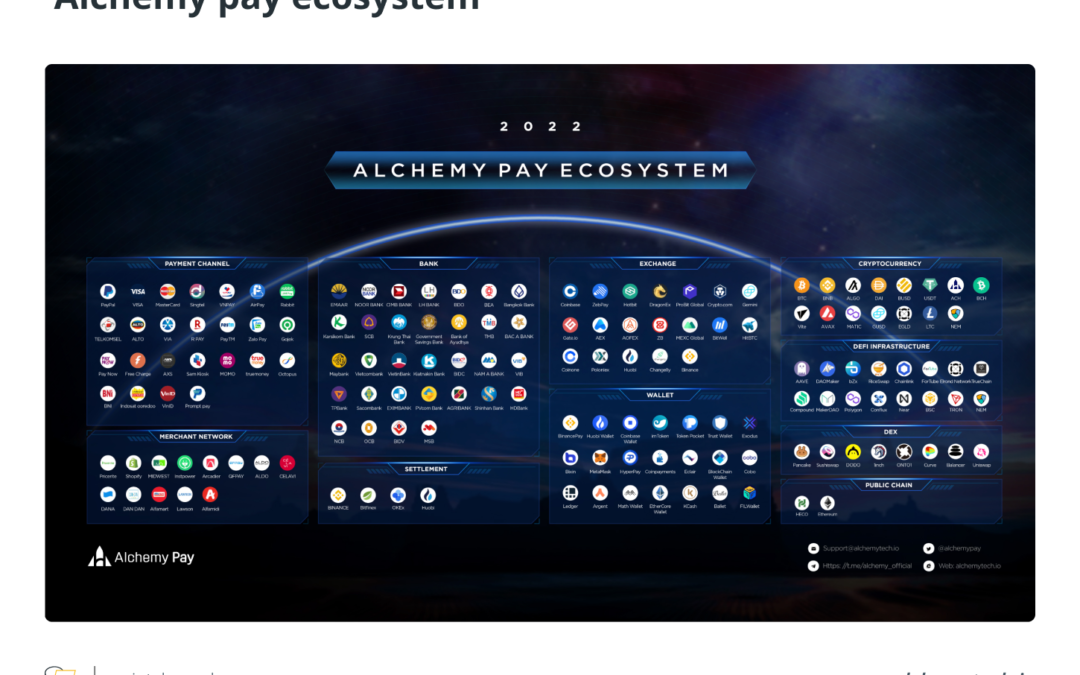 For payment tokens such as Alchemy Pay’s ACH, there may not necessarily be a world where cryptocurrencies are widely accepted as a medium of exchange for everyday transactions, such as buying a gallon of milk in the grocery store, without fiat. This is because two parallel economies exist, and bridges between fiat and cryptocurrency are needed for the time being.

But how does one price such a token with payments as its bedrock? Is there a way to arrive at a fair valuation for ACH, whose growing dominance in the payments scene is evident in the number of payment channels that integrate with its technology? Or for any other payment-focused cryptocurrencies, for that matter? Cointelegraph Research dives deeper into this subject in its most recent report.

Alchemy Pay is a Singapore-based provider of cryptocurrency payment systems and solutions. Its technology allows for the use of cryptocurrencies to pay for a product or service. Payments made in crypto are then converted for the merchant into fiat currency in real time for settlement. The ACH token is not the actual medium of exchange in this equation, but it’s crucial in facilitating fiat and cryptocurrency transactions.

For starters, the token is pledged by the network’s ecosystem partners in order to access Alchemy Pay’s services. It’s also utilized as an incentive to boost cryptocurrency transactions, as ACH tokens are rewarded to merchants and users each time cryptocurrencies are used at a point of sale. Earned ACH can later be used to pay any fees associated with the Alchemy Pay platform.

The market size of these relevant applications is approximated, along with the penetration rate for each token over a 10-year period. Velocity, which is the number of times a token changes hands in a year, is also factored in, providing an estimate of a token’s long-term, non-speculative value. For instance, tokens with high velocity tend to have more downward price pressure, as users who own them don’t have an incentive to keep them for the long haul, whereas low velocity means the opposite. In the end, the report aims to discover the potential value of a token, with the most conservative adoption rate taken into consideration.

Alchemy Pay in the payments scene

In the payments arena, Alchemy Pay has already built a strong base. It is compatible in numerous payment industries, such as online, in-store, e-commerce, entertainment, bulk transactions, supply chain finance and remittances. And its growing list of integrations and partnerships opens it up to more merchants and payment channels globally.

Alchemy Pay can support more than 300 payment channels in over 70 countries and more than 20 major cryptocurrencies. Its partnership with Shopify alone allows it to tap into more than 1 million merchants, plus millions more since teaming up with Binance. Some of the well-known brands that have integrated with Alchemy Pay include Hong Kong’s Pricerite, Singapore’s Ce La Vi, Canadian footwear brand Aldo and many others.

But even with Alchemy Pay’s advancements, the report shows that ACH has only penetrated around 0.2% of relevant applications, suggesting that ACH is still at the very early stage of adoption. This perhaps comes as no surprise considering how nascent the broader cryptocurrency industry still is.

While Bitcoin (BTC), with its relative dominance in the space, has grown to become accepted at over 28,600 venues worldwide, this is still relatively small compared with the potential markets it can capture. There is also a good reason to believe that users who own Bitcoin would rather hold on to the cryptocurrency than spend it on day-to-day transactions, further accentuating its store-of-value characteristics.

Nevertheless, it all boils down to how much adoption can continue to grow for the industry. Regardless of ACH’s utility, more users will need to start trusting it as a better alternative to current solutions. Perhaps the adoption objective is better realized not by challenging existing systems but by integrating the technology into as many channels as possible.

The report was commissioned and written in collaboration with Alchemy Pay. This article is for information purposes only and represents neither investment advice nor an investment analysis nor an invitation to buy or sell financial instruments. Specifically, the document does not serve as a substitute for individual investment or other advice.