Celsius Network is bankrupt, so why is CEL price up 4,000% in two months? 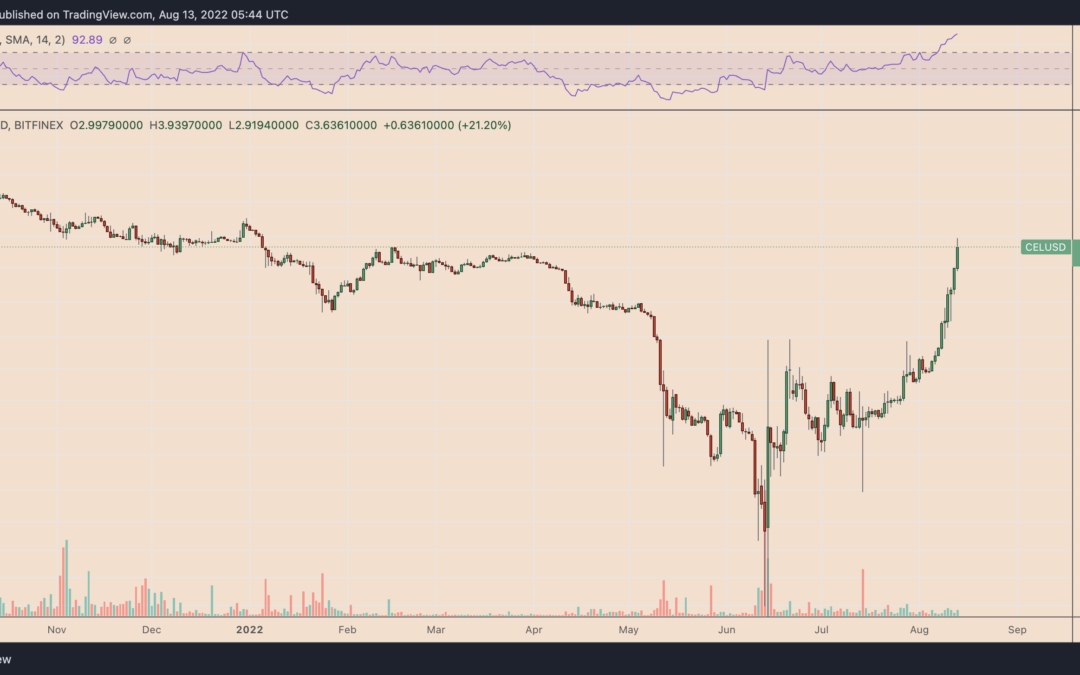 Crypto lending platform Celsius Network has an approximately $1.2 billion gap in its balance sheet, with most liabilities owed to its users. In addition, the firm has filed for bankruptcy protection, so its future looks bleak.

Still, Celsius Network’s native utility token CEL has soared in valuation by over 4,100% in the last two months, reaching around $3.93 on Aug. 13 compared to its mid-June bottom of $0.093.

Technically, the price rally made CEL an excessively valued token in early August when its relative strength index (RSI) crossed above the 70 threshold.

Takeover rumors appear to be behind CEL’s upside strength. Notably, Ripple wants to purchase Celsius Network’s assets, according to an anonymous source cited by Reuters on Aug. 10.

Reuters reported that Ripple is interested in Celsius assets but there’s no confirmation yet from either companies. Celsius has halted withdrawals from the platform since June and has filed for Chapter 11 bankruptcy which will enable them gradually payback what they owe.

CEL’s price more than doubled after the piece of news hit the wire.

In July, rumors also surfaced about Goldman Sachs’ intention to acquire Celsius Network for $2 billion. CEL was changing hands for as low as $0.39 around that time.

An army of retail traders also appears to be behind the CEL’s giant upside push in the last two months.

Some traders have organized a short squeeze to limit CEL’s downside prospects. A short squeeze is when an asset’s price rises suddenly, forcing short sellers to buy back the asset at a higher price to close their positions.

BTC is very choppy so my focus is on altcoins & CEL. I’d like btc to hold 22k for bullish bias. Cel wants breakout again, Iam looking to buy more above 2.6 with #CELShortSqueeze army behind it, could CEL pump to $3 next?

It is possible to create a short squeeze because of CEL’s lowering circulating supply, primarily due to the freeze on Celsius Network’s token transfers.

Interestingly, FTX had about 5.1 million CEL tokens on Aug. 13, approximately 90% of all the total circulation across exchanges. Meanwhile, the amount of open short positions on the exchange was around 2.66 million CEL versus the monthly high of 2.96 million CEL on Aug. 11.

In other words, short traders have closed about 300,000 CEL positions in just two days.

What’s next for Celsius toke?

Short squeezes are hard to sustain over a long period, history shows.

Such prospects put CEL at risks of facing extreme correction in the coming weeks or months. As said, the token is already overbought, which further adds up to the downside outlook.

Related: Crypto markets bounced and sentiment improved, but retail has yet to FOMO