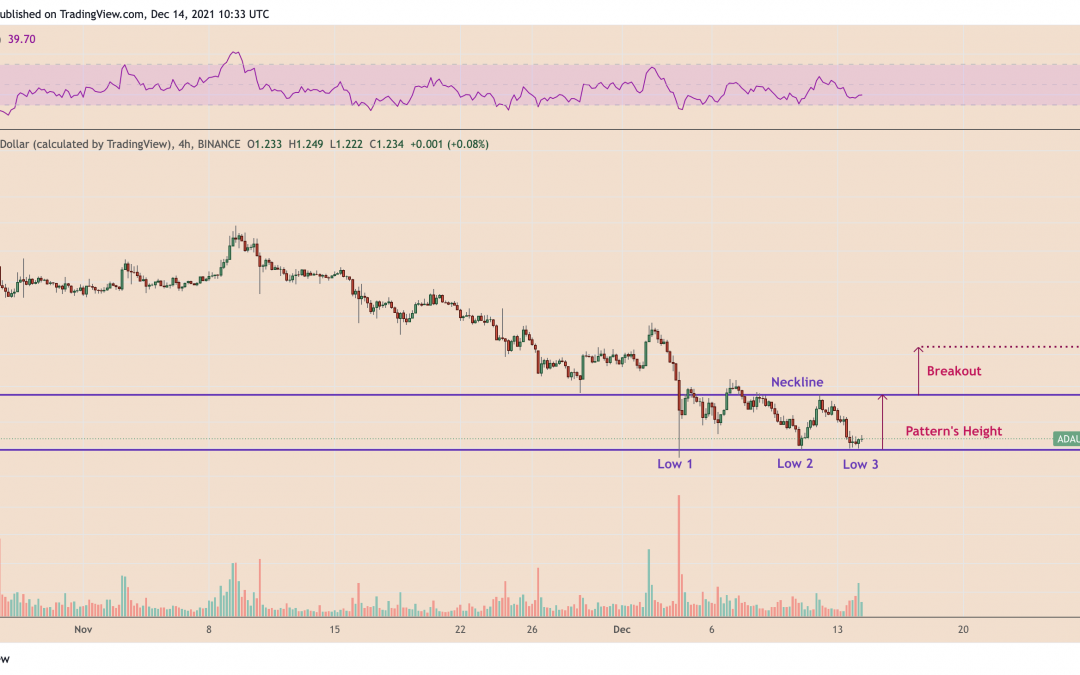 Cardano (ADA) may rally by nearly 30% in the coming days as it hints at forming a classic bullish reversal pattern.

Dubbed “triple bottom,” the pattern typically occurs at the end of a downtrend and consists of three consecutive lows printed roughly atop the same level. Meaning, triple bottoms indicate sellers’ inability to break below a specific support level on three back-to-back attempts, which ultimately paves the way for buyers to take over.

In a perfect scenario, the return of buyers to the market allows the instrument to retrace sharply towards a higher level, called “neckline,” that connects the highs of the previous two rebounds. The move follows up with another breakout, this time taking the price higher by as much as the distance between the pattern’s bottom and neckline.

So far, the ADA price has been able to paint the triple bottom halfway, now rebounding after forming the third low, as shown in the chart below.

The point at which the ADA price reversed accompanied a rise in trading volume, suggesting that the rebound had enough backing from the buyers. Therefore, the Cardano token looks poised to at least pursue a run-up towards $1.40.

Moreover, if the price further breaks above the neckline level decisively, it would likely continue to rally until it hits $1.63 — as per the triple bottom scenario.

The potential triple bottom scenario emerged after ADA’s price plunged by more than 60% from its record high of $3.16 achieved on Sept. 2 earlier this year. It also surfaced as the Cardano token became one of the worst performers quarter-to-date, dropping nearly 45.50% compared to its top rival Ether’s (ETH) 15% gains.

ADA’s multi-month selloff pushed its daily relative strength index (RSI), a momentum indicator, into oversold territory. In addition, Cardano token’s price drop also led it to what appears like a dependable “accumulation area,” as shown in the chart below.

Both RSI and the accumulation area also point to a buying scenario in the ADA market, thus supporting the triple bottom scenario on the four-hour chart.

It is important to notice that ADA dropped by more than 5.50% in the past 24 hours, much in sync with other top crypto assets in the space, with Bitcoin (BTC) sinking by over 3% and Ether by almost 5% in the same period.

At the core of the crypto market’s uniformed decline was the Federal Reserve’s two-day policy meeting starting Tuesday. In the meetup, the U.S. central bank would likely decide to accelerate the tapering of its $120 billion a month asset purchasing program, one of the key catalysts behind the crypto and stock market rally since March 2020.

Other parts of the Fed meeting would see the officials discussing the prospects of rate increases next year from its current near-zero levels. Cheaper lending had also played an important role in pushing the Bitcoin and altcoin market prices higher across 2020 and 2021, including ADA.

As Fed officials initiate their policy meeting, the Cardano token would be testing $1.18 as its weekly support for a potential price rebound. The $1.18-level is the 0.618 Fib line of what appears to be an accurate Fibonacci retracement graph in predicting ADA’s support and resistance levels.

Should ADA fail to rebound and close below $1.18, its next Fib support may come at 0.786 Fib line near $0.674, around 42% below. Nonetheless, ADA/USD may also test $1 as psychological support for an early upside retracement, similar to its multiple rebounds between February and July 2021.