Can Ethereum price reach $4K after a triple-support bounce? 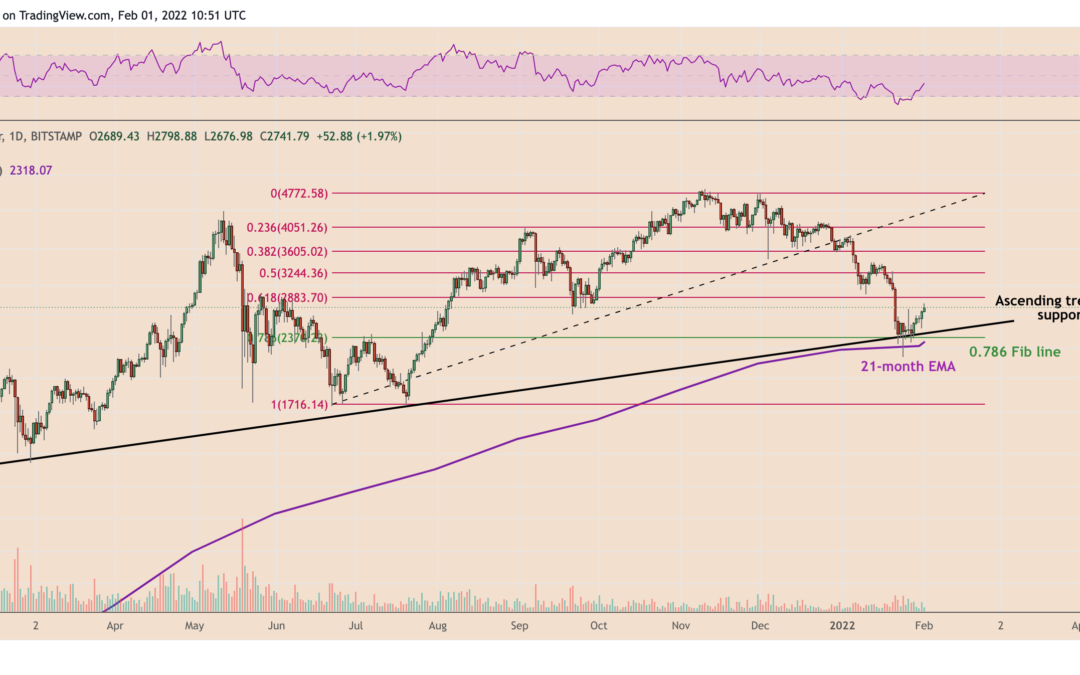 The pseudonymous chart analyst discussed the role of at least three support levels in pushing the ETH price up by nearly 30% from its local bottom of $2,160. These price floors included a 21-month exponential moving average (EMA), the 0.786 Fib level of a Fibonacci retracement graph drawn from $1,716-swing low to $4,772-swing high and the lower boundary of an ascending triangle pattern.

Wolf noted that the triple-support scenario could push Ether price to $3,330. In doing so, the confluence would activate a classic bullish reversal setup, dubbed inverse head-and-shoulders (IH&S).

In detail, the IH&S pattern could have Ether form three consecutive troughs, with the middle trough (the head) deeper than the other two (the left and right shoulders). Meanwhile, all the troughs will hang upside down below a common resistance trendline, called the neckline.

In a “perfect” scenario, a break above the IH&S neckline may push the Ether price to as high as the maximum distance between the neckline and the head. That puts the ETH price en route to $4,000.

But if ETH gets rejected in the run-up to $3,000, it would mean a pullback toward the ascending triangle support.

ETH bulls ain’t out of the woods

As Cointelegraph covered earlier this week, Ether’s ongoing price rebound comes as a part of a broader correction that started after ETH reached its record high above $4,850 in November 2021. In doing so, the Ethereum token fell by as much as 55.65% to $2,159 before bouncing upward by 30% to reach its current price levels.

The retracement could come out as a temporary respite in Ether’s general downtrend. As a result, its price could still fall lower, according to a “bear flag” setup shown in the attached chart below, with a downside target near $2,000.

Several on-chain indicators agree with the bearish outlook. For instance, Glassnode data shows that the Ethereum balance on all exchanges has been rising since early December 2021, coinciding with the ETH’s price declines.

A rising number of ETH held by exchanges raises the likelihood of traders selling them for other assets. Notably, a yearlong decline in the number of ETH in exchanges’ reserves had coincided with the Ether price rallying from $730 to over $4,800.

For Ethereum, it’s whales against fish

More downside cues for the Ethereum token come from a clear absence of influential buyers in the market. For instance, some of Glassnode’s metrics show that the number of Ether wallets that hold more than 100 ETH and less than 1,000 ETH has been declining steadily since the beginning of 2021.

Ether is also not immune to the ongoing macroeconomic trends. For instance, its recent price decline appeared primarily in the wake of the Federal Reserve’s plans to speed up the withdrawal of its $120 billion a month COVID-19 stimulus program by March 2022, followed by at least three rate hikes.

Nevertheless, retail investors look unfazed by the macroeconomic developments. On Feb. 1, the number of ETH addresses with a non-zero balance reached a new record high of over 74.137 million. Last week, the total amount of wallets with at least 1 ETH had also peaked near 1.414 million.

Ethereum addresses with a balance of at least 10,000 ETH — the real whales — also show a slight improvement. In detail, their numbers increased from 1,157 to 1,163 during the January 2022 price correction, showing that the richest wallet holders had been buying the dip.

According to Nick, a market analyst from Ecoinometrics, the cryptocurrency market is still in a “danger zone” due to the Fed’s hawkish turn. But there is still hope that the central bank would once again switch to quantitative easing if the stock market falls by another 15%–20%.

“It is when there is blood on the streets that you can find good opportunities to make money,” Nick wrote in the latest analysis, adding;

“Even though there are some risks of more downside or simply a prolonged period of weak price action until the Fed comes back to its senses, now is probably a good time to build a position and wait for the real pump to begin.”