Bitcoin’s inverse correlation with US dollar hits 17-month highs — what’s next for BTC? 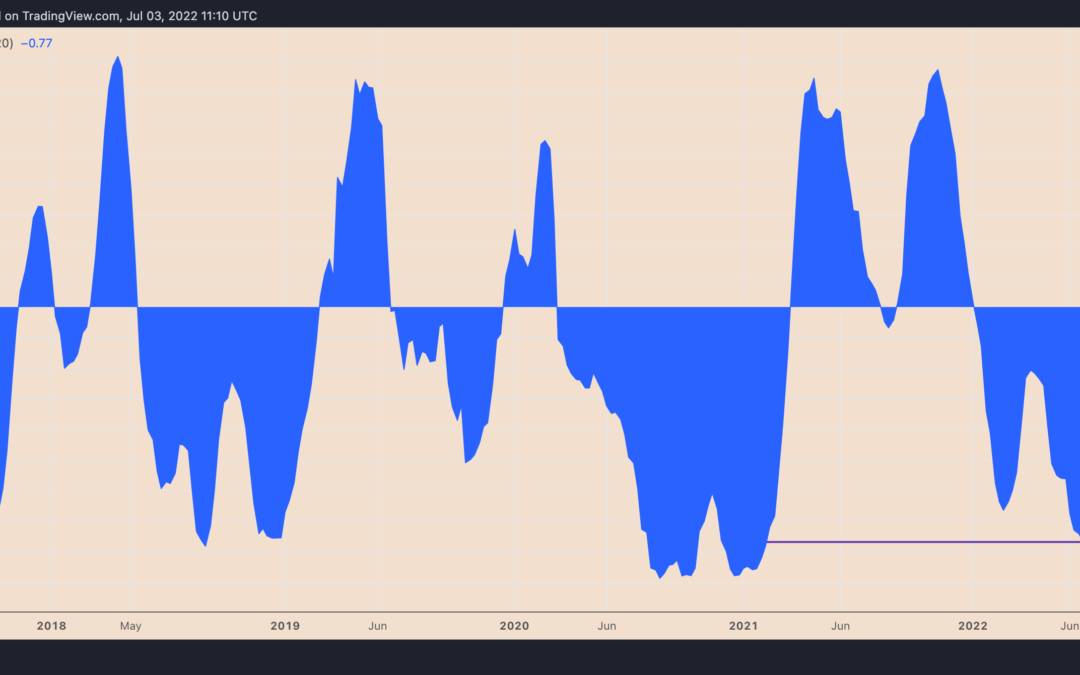 Bitcoin (BTC) has been moving in the opposite direction of the United States dollar since the beginning of 2022 — and now that inverse relationship is more extreme than ever.

Bitcoin and the dollar go in opposite ways

Notably, the weekly correlation coefficient between BTC and USD dropped to 0.77 below zero in the week ending July 3, its lowest in seventeen months.

Meanwhile, Bitcoin’s correlation with the tech-heavy Nasdaq Composite reached 0.78 above zero in the same weekly session, data from TradingView shows.

That is primarily because of these markets’ year-to-date performances amid the fears of recession, led by the Federal Reserve’s benchmark rate hikes to curb rising inflation. Bitcoin, for example, has lost over 60% in 2022, while Nasdaq’s returns in the same period stand around minus 29.72%.

On the other hand, USD has excelled, with its U.S. dollar index (DXY) — a metric that measures its strength against a basket of top foreign currencies — hovering around its January 2003 highs of 105.78.

The Fed appears compelled to increase benchmark rates based on how traders have priced the front-end derivative contracts.

Notably, traders anticipate the Fed to raise the rates by 75 basis points (bps) in July. They also bet Fed won’t raise rates beyond 3.3% by this year’s end from the current 1.25%-1.5% range.

However, a push to 3.4% by the first quarter of 2023 could have the central bank dial back its aggressive tightening.

That could result in a 50 basis point cut by the end of next year, as shown in the chart below.

An early rate cut could happen if the inflation data cools down, thus limiting investors’ appetite for the dollar, according to Wall Street analysts surveyed by JPMorgan. Notably, around 40% see the dollar ending 2022 at its current price levels — around 105.

Meanwhile, another 36% bet that the greenback would correct ahead of the year’s close.

“Foreign exchange is not a linear world. At some point, things flip,” noted Ugo Lancioni, head of global currency at Neuberger Berman, adding:

“I personally have a bias to short the dollar at some point.”

In addition, the dollar’s ability to continue its rally for the rest of 2022 could be hampered by a classic technical pattern.

First spotted by independent market analyst Agres, the DXY’s double top pattern is partially confirmed due to its two consecutive highs and a common support level of 103.81.

As a rule of technical analysis, the double top pattern could resolve when the price breaks below the support and falls by as much as the structure’s maximum height, as shown in the chart below.

“The dollar is extremely overbought and overheated,” explained Agres, adding that its correction in the coming sessions could benefit stocks and cryptocurrencies:

“Finally, looking like it [DXY] will topple down hard. In perfect confluence for a melt-up scenario. When [the] dollar goes down, stocks and crypto rally.”

Meanwhile, Bitcoin’s “MVRV-Z Score” has also fallen into a range that has historically preceded sharp, long-term upside retracement. This on-chain indicator predicts that Bitcoin could bottom at around $15,600 in 2022.