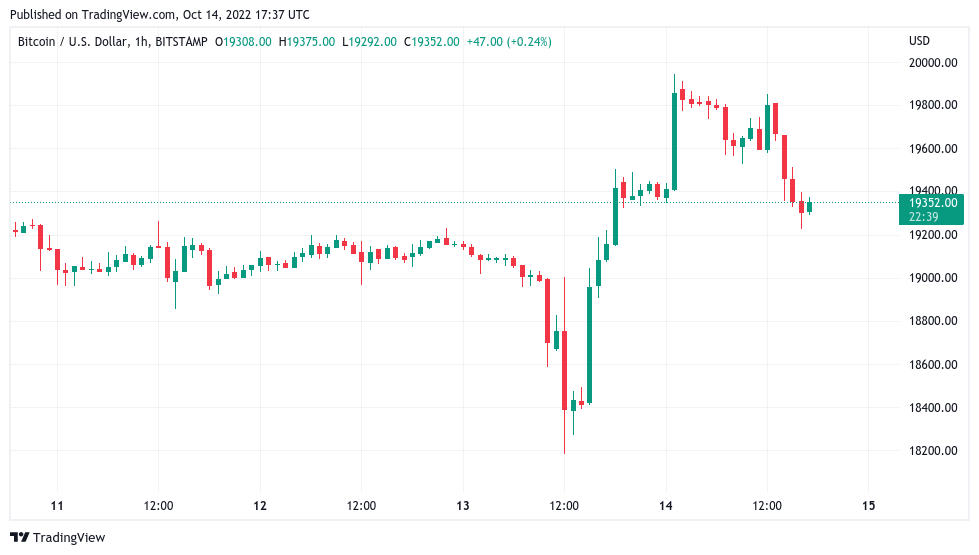 Bitcoin (BTC) cooled near $19,200 after the Oct. 14 Wall Street open as stocks struggled to preserve their “bear trap.”

Data from Cointelegraph Markets Pro and TradingView followed BTC/USD as it came off one-week highs on the day to circle $19,300.

The pair had seen intense volatility on the back of United States economic data the day prior, this sparking hundreds of millions of dollars in liquidations from both long and short positions.

Now, after turning the tables and adding almost $2,000 in 24 hours, Bitcoin was again losing momentum as U.S. equities turned red on the day.

Investigating the status quo, Alasdair Macleod, head of research at Goldmoney, pointed to rampant gains in long-dated U.S. bonds as a key factor in the pressure being felt across markets.

“US Try bond yields continue to soar,” he commented.

“So long as this is the case abandon all hope for financial asset values.”

The U.S. dollar index, a classic headwind maker for risk assets, made strong progress on the day, passing 113.4 before consolidating.

Macleod meanwhile noted that even under existing dollar strength, major world currencies were showing increasing strain, among them the Japanese yen and, increasingly, the Chinese yuan. The former traded at its lowest versus the U.S. dollar in 34 years on the day.

Il Capo of Crypto reiterated an existing theory involving a push to near $21,000 before a new macro bottoming sequence ensued.

For Michaël van de Poppe, founder and CEO of trading firm Eight, the current spot price was an important line in the sand.

“Bitcoin broke up even more, through which the area around $19.4K is important to sustain,” he concluded on the day.