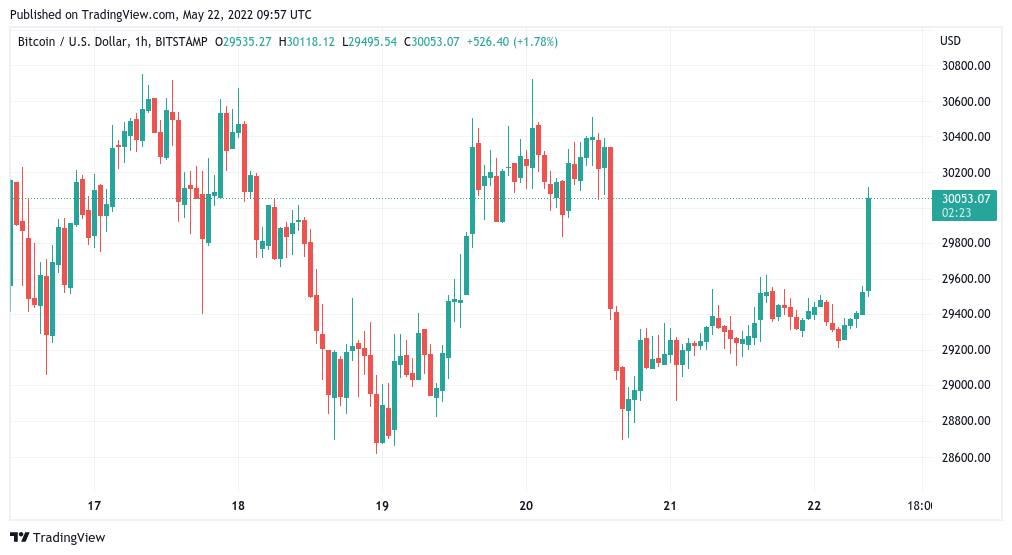 Bitcoin (BTC) gave bears little joy over the weekend as the May 22 weekly close looked set to revolve around $30,000.

Waiting for Bitcoin to “make a decision”

Data from Cointelegraph Markets Pro and TradingView followed BTC/USD as it held a narrow range after the Wall Street trading week.

With volatility absent, traders hoped for a move to larger areas of support or resistance next.

“Still wedged between the supply and demand zone .. Hoping for a break today so we have some juicy action to play with,” popular trader Crypto Tony summarized, noting upside and downside targets were around $27,900 and $31,000, respectively.

Time for #Bitcoin to make a decision? pic.twitter.com/DEfNhuvnYa

Should it close at current levels of $30,000, BTC/USD would still seal a record eighth consecutive red candle on the weekly chart.

The week of the World Economic Forum could, likewise, be overshadowed by external market turmoil. Cointelegraph noted that the S&P 500 had already lost 20% from its peak to enter official bear market territory.

Fellow popular Twitter account PlanC nonetheless noted that Bitcoin’s correlation to stocks had been decreasing compared to the previous months.

Attention was more focused on a different price story on the day, however, as May 22 marked the infamous Bitcoin Pizza Day.

On May 18, 2010, Laszlo Hanyecz, one of the earliest Bitcoin miners, purchased two pizzas for a total of 10,000 BTC, saying that he could alternatively sell the stash for around $41 at the time.

Hanyecz’s move became legendary, with his original post advertising it on the Bitcointalk forum still live.

Then trading at under $0.0005 per coin, Bitcoin since appreciated by approximately 1.38 billion percent to reach its all-time highs of $69,000 eleven-and-a-half years later.

According to a dedicated monitoring resource, the Bitcoin Pizza Index, Hanyecz’s purchase was worth $295 million as of May 22.