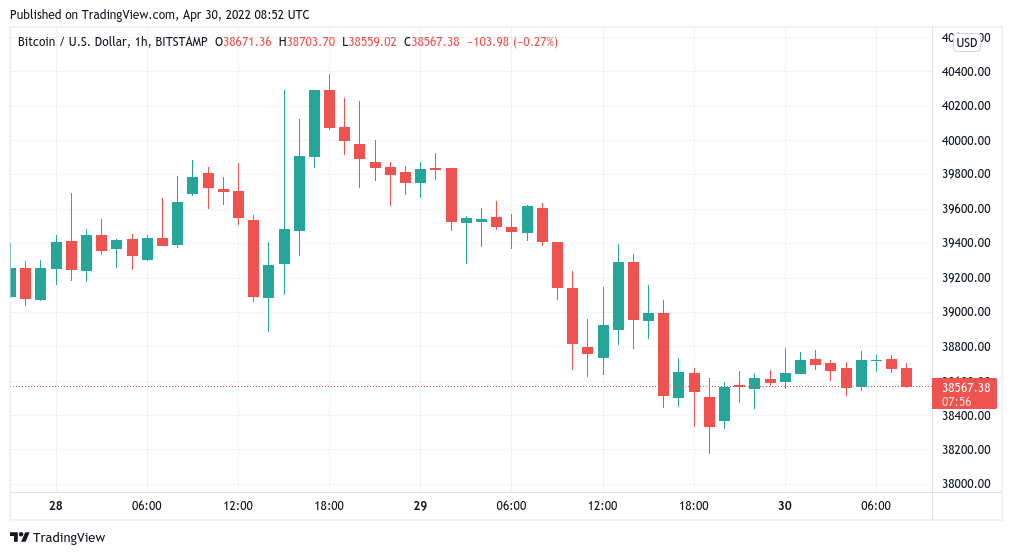 Data from Cointelegraph Markets Pro and TradingView showed BTC/USD reversing at $38,180 on Bitstamp to circle $38,600 on April 30.

The pair had performed weakly on April 29, and this nonetheless echoed the vast majority of traditional assets — with the notable exception of Chinese equities.

The United States Dollar Index (DXY), despite wobbling after hitting twenty-year highs, further failed to offer respite as it began to consolidate near its two-decade peak.

“Would be pretty hard to rally price against a macro bear market in the short term. It’s what happens after a correction that counts,” statistician Willy Woo argued as part of a Twitter debate.

“But also the DXY is at multiple technical resistances, if the govt steps in with yield curve control then we could see markets rally.”

Yield curve control is also being watched as a major watershed moment not just for crypto but for the economies ruled by governments who instigate it.

“When it is finally implicitly or explicitly declared, it’s game over for the value of the USD vs. gold and more importantly Bitcoin. YCC is how we get to $1 million Bitcoin and $10,000 to $20,000 gold.”

Explaining why BTC/USD continues to stay in a range, meanwhile, Woo said that events could be mimicking Q4 2020 — just before Bitcoin broke out of what was then a three-year trading range.

“Bitcoin price is sideways because of Wall St is selling futures contract in a macro risk-off trade. Meanwhile institutional money is scooping spot BTC at peak rates and moving to cold storage,” he wrote.

“It’s times like these I remember the Q4 2020 supply shock squeeze.”

An accompanying chart showed flows in and out of exchanges compared to spot price, showing the impact of “supply shock.”

As Cointelegraph recently reported, that same conclusion is also being drawn from data covering Bitcoin whales.