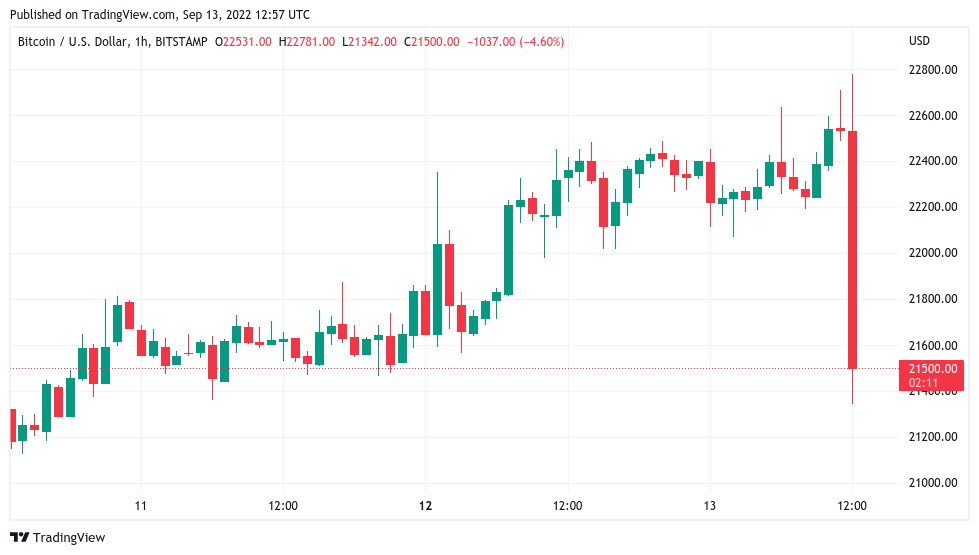 The consensus was that 8.1% would be the latest figure, and the overshoot suggested that inflation was not slowing at the expected pace.

Not what the Fed wants to see.

So 75bps it is at the next meeting?

Nonetheless, versus July, year-on-year growth was still down 0.2%, preserving the overall trend of slowing CPI inflation.

This was not enough to avoid a crypto rout, however, and at the time of writing, Bitcoin was below $21,500, down 4% on the day.

As market participants increased bets on a further 75-basis-point and even a 100-point rate hike from the Federal Reserve next week, cold feet were increasingly noticeable ahead of the Wall Street open.

This is just a test of the real

“Lots of volatility around these events and a ton of fake-outs do happen,” Michaël van de Poppe, founder and CEO of trading firm Eight, responded.

“Remind yourself that and avoid excessive trading. Right now, lows are taken and some consolidation seems to be happening.”

The U.S. dollar index (DXY) strength, which traditionally means headwinds for crypto, saw a flash rebound on the CPI news, passing 109 for the first time since Sept. 9.

On altcoins, pain for Ether (ETH) continued as existing weakness was compounded by Bitcoin’s dip.

Related: Bitcoin and altcoins pop to the upside, but upcoming macro events could cap the rally

Despite the incoming Merge event, ETH/USD and ETH/BTC both extended losses as the largest altcoin by market cap failed to capitalize on surrounding hype.

“Even with the CPI print, this was always an area of resistance,” popular trader Altcoin Sherpa reacted.

“Heavy interaction w. this level over the last year, it’s still an area to take caution.”