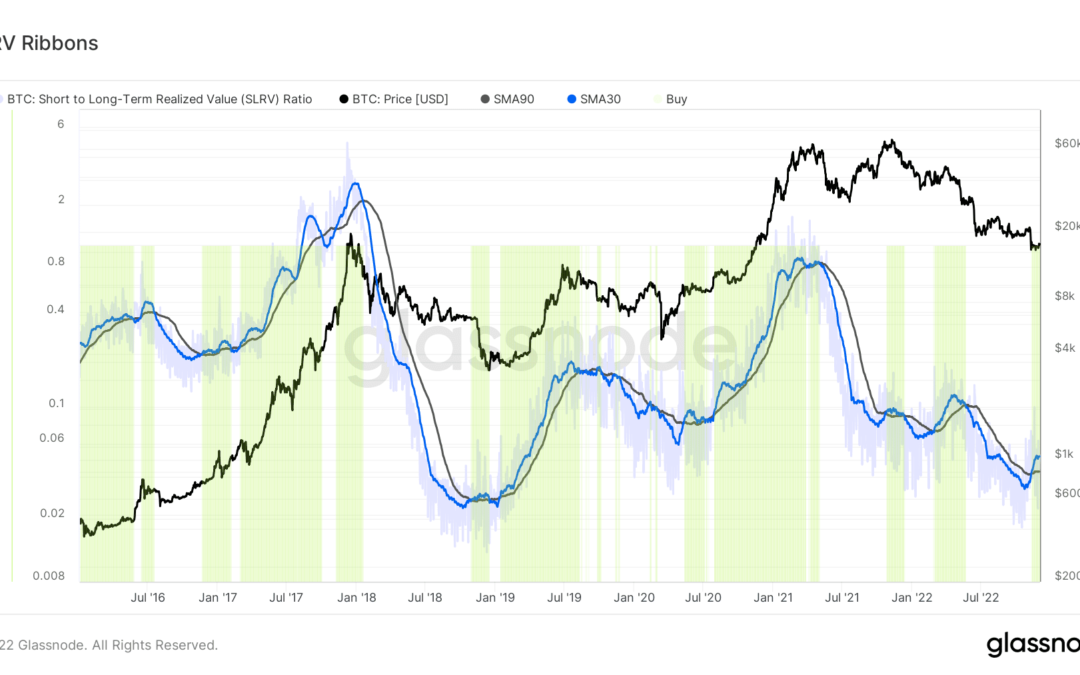 After a whirlwind November for Bitcoin (BTC), certain on-chain and Bitcoin price metrics are suggesting that BTC’s bottom could occur in December. In Capriole Investments’ latest report, they provide analysis on Bitcoin finding the bottom. When taking into realized value, miner capitulation, mining electrical costs, downdraw and record hodler numbers, a BTC floor of $16,600 – $16,950 seems formed.

Here are five reasons why Edwards believes Bitcoin price is coming closer to a cycle bottom.

The SLRV Ribbons track investment flows by combining the 30-day and 150-day moving averages to the SLRV Ratio which is a percentage of the Bitcoin moved in 24 hours divided by BTC held for 6-12 months.

According to Charles Edwards, the SLRV Ribbons outperform the BTC HODL strategy, making it a strong indicator of where BTC price might be headed.

While the SLRV Ribbons have been bearish throughout 2022, the recent move to $16,600 flipped the indicator to bullish. According to Edwards, the change creates a buy signal for investors and institutional funds still in the market, thus building a strong case for Bitcoin’s price floor.

While it is well known that a large swath of Bitcoin miners are currently operating at a loss, this is not a rare phenomenon throughout BTC’s history.

Miners are still losing money with production costs above the spot price of Bitcoin. This dichotomy forces miners to sell Bitcoin to stay afloat.

In hindsight, investors would love to have those prices back and Edward’s suggests that the current BTC price may represent a similar value.

Bitcoin miner capitulation involves miners turning off their ASICs which are no longer profitable, and selling portions of their Bitcoin reserves to cover expenses.

Throughout Bitcoin’s history, the NUPL metric has only shown such a large downdraw on four occasions.

The previous occasions that witnessed such large downdraws represented value Bitcoin purchases for investors. Edwards suggests that if investors view BTC price as undervalued, their choice to accumulate could further solidify Bitcoin’s floor.

Another trend is forming as the long-term hodlers metric hits peak numbers. Currently, 66% of Bitcoin’s supply is in the hands of long-term hodlers, meaning they have held their Bitcoin for over one year.

According to Edwards, this behavior is aligned with shifting macro markets.

We have an all-time-high in long-term hodling. Those keeping Bitcoin at least 1 year now represent more of the network than ever before, 66%. Prior peaks of long-term holding all aligned with bear market toughs. pic.twitter.com/4IXnUg5f3S

While the markets are still heavily correlated to equities and vulnerable to macro market shifts, multiple data points hint that Bitcoin could be in the final stages of a bottoming process.