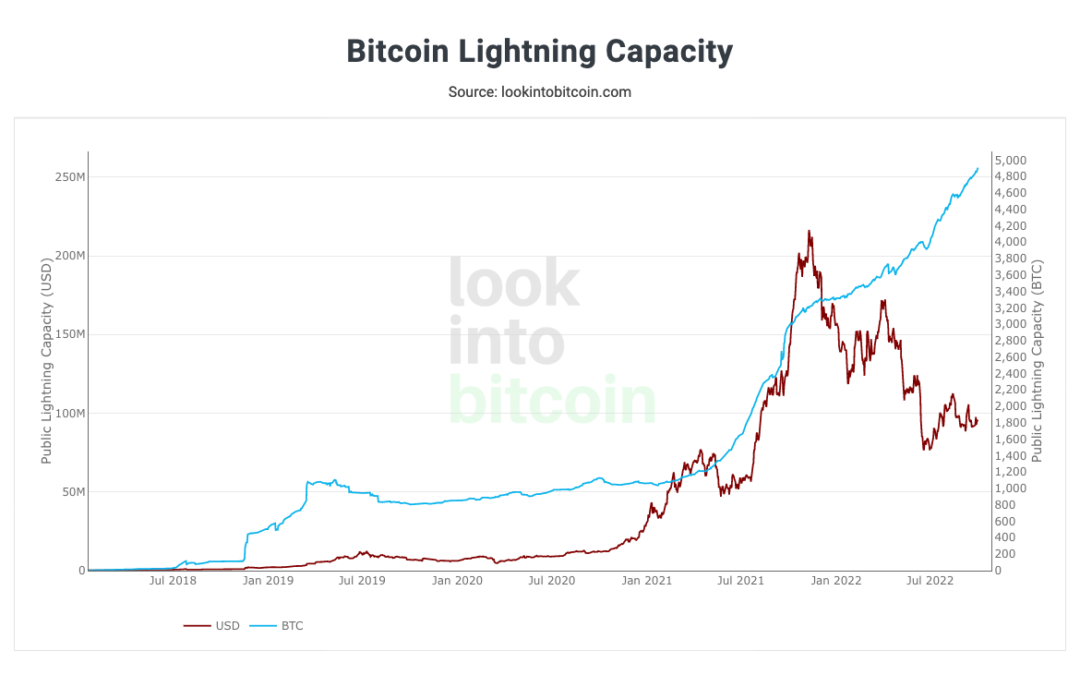 The Bitcoin Lightning Network reached a milestone capacity of 5,000 BTC ($96 million). In effect, more and more Bitcoin is being introduced to Lightning Network payment channels worldwide, as Bitcoiners continue to support the growth of the network.

The Lightning Network allows users to send Bitcoin (or satoshis, the smallest amount of a Bitcoin) to send or receive money faster and with lower fees. The more capacity on the network, the more liquidity is on hand. As a result, users can experience faster payment speeds and potentially larger transaction volumes.

First created in 2018, the Lighting Network has come under fire recently. Bitcoin influencers such as Udi Wertheimer have discussed the network’s “failure,” claiming that no one uses the network. Nonetheless, the network hit 4,000 BTC capacity in June and over the past four years, it has become a reliable payment network and is popular in El Salvador, the Isle of Man and Gibraltar:

Nourou, of Bitcoin Senegal, explains why the LN is so important. He told Cointelegraph, “In Senegal, we have an economy of 50 FCFA. That is to say that the Senegalese of the working and proletarian class, who represent the majority of the population, buy, for their breakfast, 50 FCFA (0.07€) of milk, sugar, coffee, water, and many other basic products.”

“Microtransactions are our economic reality. For Bitcoin to become the standard in the years to come, and in our economies, the lightning network would have to have enough capacity to support these microtransactions.”

Nicolas Burtey, CEO at Galoy, was one of the first to celebrate the 5,000 Bitcoin achievement. Burtey told Cointelegraph that the adoption of Bitcoin in El Salvador was the tipping point for the Lightning Network. This is where all metrics really started to take off.” He joked, “The bill should have actually been called the Lightning Law!”

Burtey continued, explaining that while the 5,000 BTC metric is important, “Payment velocity per channel is growing at an even faster rate. It’s a more meaningful metric, but only node operators can see it, so it’s not so prominent in the media.”

The Lightning Network, once a space for hobbyist Bitcoin enthusiasts, now appeals to large corporations. MicroStrategy is now hiring for a Bitcoin Lightning Software engineer. MicroStrategy is the largest holder of Bitcoin among publicly traded companies, with 130,000 BTC on its balance sheet.

Related: Raise a glass to Satoshi’s Place: the challenge of running Bitcoin businesses

For Nourou, who’s hosting Dakar Bitcoin Days in December, the first major Bitcoin conference in Senegal, the 5,000 BTC milestone is monumental:  “An increase in BTCs blocked in the network and the number of channels opened in parallel is a further step towards the democratization of Bitcoin transactions in the world.”