Bitcoin hovers near $48K ahead of fresh key US inflation data 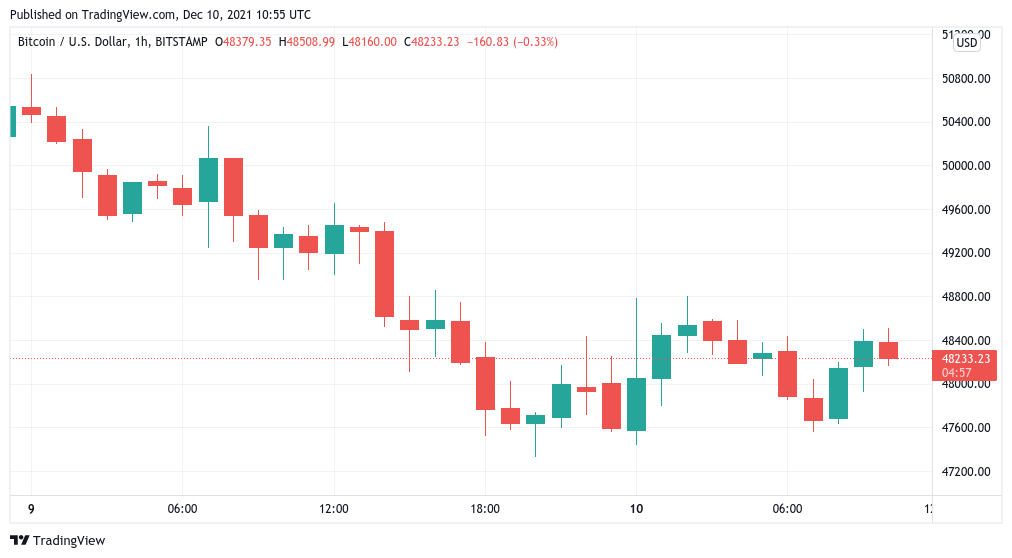 Data from Cointelegraph Markets Pro and TradingView showed the pair orbiting $48,300 at the time of writing as markets braced for November’s Consumer Price Index (CPI) readout.

While last month’s shock CPI news fuelled an uptick across Bitcoin and crypto assets, caution among analysts prevailed ahead of Friday’s figures.

“At this point I think the CPI data is moot. Markets have priced it in unless it’s to the extreme end,” popular trader Pentoshi argued on Twitter.

He added that the “real” potential market mover from the macro side should be next week when the United States Federal Reserve’s Federal Open Market Committee gives indications over the central bank’s asset purchase taper policy.

Increasing the rate of tapering — decreasing asset purchases — would pressure risk assets, commentators say, leading to reduced performance for Bitcoin. For Arthur Hayes, former CEO of derivatives platform BitMEX, this would only reverse once the Fed returns to “business as usual.”

“For those who are deciding whether to allocate more fiat into crypto, it pays to wait. I don’t see money getting any free-er or easier. Therefore, it pays to sit on the sidelines until the dust settles after a March 2022 or June 2022 Fed rate hike,” he wrote in his latest blog post on Thursday.

“Watch out for a puke fest in risk asset prices should the Fed hike, followed by a quick resumption of zero interest rate policy and aggressive bond purchases. When the Fed signals a return to business as usual, then it’s time to back up the truck.”

Such a prognosis ties in with existing medium-term forecasts for Bitcoin putting its cycle top further on in 2022 — not this month, as previously slated.

“Bottoms take time. Unfortunately, they do. And we’re getting close to it with Bitcoin,” he advised Twitter followers.

He added that compared to 2017, the last post-halving bull run year, Bitcoin was “probably” more toward the beginning of its peak phase than the end of it.

Meanwhile, separate data, which has shown Bitcoin copying price action from 2017 almost to the day, faces a key test this month.