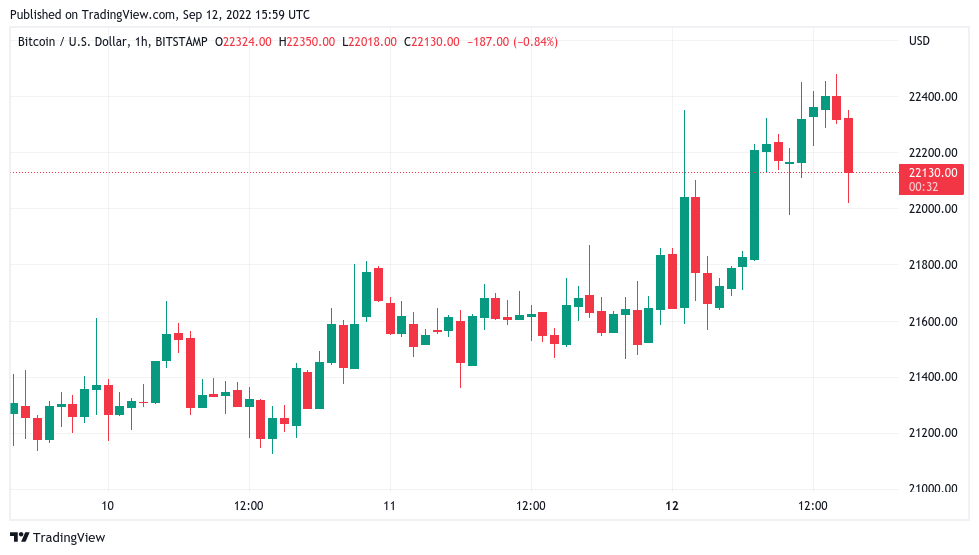 Data from Cointelegraph Markets Pro and TradingView showed BTC/USD hitting $22,481 on Bitstamp, its highest since Aug. 19.

The pair had preserved existing gains over the weekend, with a declining U.S. dollar providing a catalyst for risk assets as the week began.

Analyzing the situation, popular trader Crypto Ed said that the time had now come to eye a corrective move on BTC/USD.

“I would say that all signs are there for some shorts,” he told viewers in his latest YouTube update.

A CME Bitcoin futures gap left over from the Sept. 10 close, meanwhile, added the area around $21,400 as a possible retracement target.

Equally expecting a trend change was Il Capo of Crypto, who on the day reinforced a conviction that the current price strength was simply a relief rally within an overall bear market.

“Most people getting bullish now. Remember that this is a short squeeze, a bounce that happens during a bear market to continue the downtrend afterwards,” he tweeted.

Having sealed a weekly close above its realized price, BTC/USD now looked primed to see a daily candle close above the 100-day moving average (MA) for the first time since April.

Less inspiring, meanwhile, was price action on Ethere (ETH), which lost ground on the day despite ongoing hype around the Merge.

Related: The Fed, the Merge and $22K BTC — 5 things to know in Bitcoin this week

ETH/USD was down 2.2% at the time of writing, while ETH/BTC caught the attention of some market participants.

Update: Rejection off the 0.085 level for ETH/BTC.

My position that the run-up in ETH going into the merge has no more gas is intact. Will continue watching this. https://t.co/HKPdHmsDrb pic.twitter.com/Xy0J6baaai

Bitcoin’s share of the overall cryptocurrency market cap thus saw a stiff rebound on the day after hitting just 38.9%, its lowest since January.