Biggest NFT drops and sales in 2021 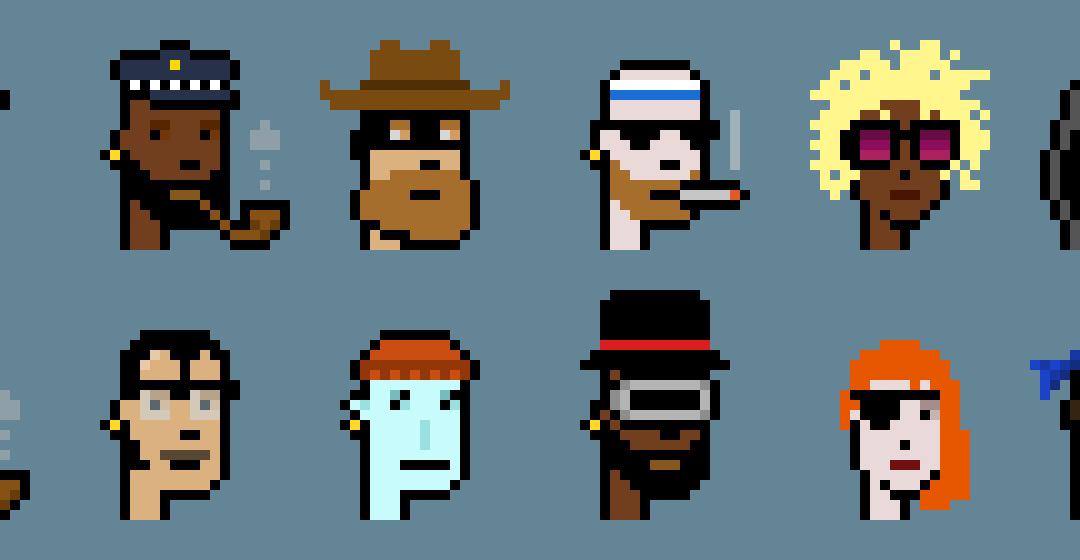 Nonfungible token, or NFT, became such a tech buzzword in 2021 that even Collins Dictionary declared the abbreviation its word of the year and Google searches for NFTs spiked to record levels.

Behind the term is a market that approaches $17 billion, according to Cointelegraph Research. And the NFT marketplace OpenSea is responsible for processing most of these transactions, with a trading volume that recently surpassed $10 billion.

NFTs’ potential reaches far beyond art to include music, sports collectibles and video games, while its utility encompasses ownership as well as exclusive access to unique functions and features.

From CryptoPunks and Beeple’s collage to NBA Top Shot and RTFKT, the following collections stood out, not only in numbers but for their growing communities. As we wrap up 2021, let’s take a look at the top 10 collections and sales in NFTs this year.

CryptoPunks are the OG of NFTs, according to DappRadar. The collection launched back in 2017 before the ERC-721 NFT standard existed. Larva Labs released all 10,000 punks for free to Ethereum users and since then, CryptoPunks’ popularity and value on the secondary market have boomed.

In June 2021, an alien punk sold at Sotheby’s for $11.75 million. In August, Visa acquired a $150,000 CryptoPunk for its corporate collection and Hollywood agency UTA inked a deal to use CryptoPunks in mainstream media. August 2021 saw a record $400 million spent on CryptoPunks in a single month. In September, Reddit co-founder Alexis Ohanian attended the Met Gala sporting a CryptoPunk badge.

CryptoPunks has seen the highest trading volume on OpenSea with 756,984 Ether (ETH) ($3.03 billion). Its increasing value and historical relevance makes it the top NFT collection.

The collection with the second highest historical trading volume is Bored Ape Yacht Club, or BAYC, with 266,843 ETH ($1.07 billion).

The core team behind Yuga Labs is made up of four friends who wanted “to make some dope apes, test our skills and try to build something ridiculous” this year, according to their website. The lead artist behind BAYC is All Seeing Seneca. As an owner of one of the 10,000 Bored Apes, an NFT can double as a Yacht Club membership card and grant members-only access to THE BATHROOM, the Bored Ape Kennel Club and Mutant Ape Yacht Club, or MAYC.

In September, Sotheby’s sold a collection of 107 BAYC NFTs, made up of 101 Bored Apes and six Mutant Apes, for $24.4 million. This is the third-highest off-chain NFT art sale at an auction house to date, after Beeple’s NFT pieces. In November, a surge in OpenSea sales appeared to be connected with a more than 900% uptick in the sale volume of BAYC and MAYC NFTs, likely due to celebrity buyers like Jimmy Fallon, Post Malone who featured BAYC NFTs in a music video and Rolling Stone magazine Bored Ape and Mutant Ape covers. Most recently, BAYC was part of a four-way collaboration between PUNKS Comic, Gmoney and Adidas Originals for the launch of Adidas’ “Into the Metaverse” NFT project.

Thrilled to have collaborated with @RollingStone on their first-ever NFT covers. Auctions for these two 1 of 1’s close Monday on @SuperRare:

On Tuesday, Bored Ape Yacht Club NFTs surpassed the floor price of CryptoPunks for the first time indicating bullish public sentiment toward the future of BAYC.

NFT artist Mike Winkelmann, better known as Beeple and self-described as a “dude who makes crap,” holds the record for first and second-most expensive digital art pieces sold at public auction and off-chain as of November 2021, according to Art Market Research.

Following British auction house Christie’s $69.3 million sale of Beeple’s “Everdays: The First 5000 Days” in March 2021, Beeple’s “HUMAN ONE” piece sold for $28.9 million in November. “HUMAN ONE” is a tangible seven-foot-tall rotating box made of LED screens. It can be physically displayed, unlike most NFTs that live in digital wallets. The footage on the screens will be periodically edited and updated using blockchain by Winkelmann in response to current events, according to Christie’s statement.

Beeple became a household name in 2021, especially after winning GQ’s Maddox Gallery Artist Of The Year in September and sitting down with Jimmy Fallon on the late-night TV talk show The Tonight Show.

Related: Why NFTs can be a riskier investment than cryptocurrencies — Report

Axie Infinity shattered records as the game became the first DApp to surpass $2 billion in NFT trading volume this year, according to a DappRadar Q3 industry report. Axie lags just behind CryptoPunks in trading volume. The game recently moved to the Ronin sidechain solution and generated over $776 million in revenue in Q3.

Axies are creatures used to duel other players, battle enemies and complete daily quests. These NFTs can be bred (minted), bought and sold, and are valued by their rarity and in-game advantages. In November, a land plot within the monster-battle NFT game sold for a lucrative 550 ETH ($2.3 million).

Axie Infinity co-founder Jeff “Jiho” Zirlin spoke on a panel at the NFT BZL conference earlier this month about his belief that “we are in a battle for the future of the internet, and grassroots communities such as Axie are having an impact against large corporations,” referring to corporations like Facebook and Apple.

Axie Infinity was first created in 2018 and currently leads the gaming sector as a pioneer of the play-to-earn, or P2E, movement. And since launching a staking program that allows users to hold Axie Infinity Shards (AXS) governance tokens, the trading game increasingly attracts players.

NBA Top Shot is a popular fantasy basketball NFT game that first launched in late 2020. As a first-of-its-kind sports collectible game, users can collect, trade and sell cards as digital tokens that represent their favorite NBA players and moments. Highlights can be used to complete challenges or arrange into showcases to show off to the community.

This summer, Top Shot collectors who were in person at the NBA Summer League games in Las Vegas were able to purchase live in-arena moments. It also welcomed the WNBA to Top Shot and introduced its first WNBA pack drop.

Officially licensed by the National Basketball Association, NBA Top Shot was created by Dapper Labs and built on the Flow blockchain. The historical trading volume, according to DappRadar, is $750.4 million. The three highest-selling NFTs were LeBron James NFTs from the Los Angeles Lakers’ 2019–2020 season.

Behind VeeFriends is entrepreneur Gary Vaynerchuk, also known as Gary Vee, as both the artist and the project founder. His hand-drawn animal doodles sold out in May for $51 million at auction in the first week, which Vaynerchuk said in one of his podcast episodes, he pocketed. After 90 days, VeeFriends’ revenue totaled $91 million. For the additional $40 million, Vaynerchuk received a 10% royalty on every secondary transaction. In October, Christie’s auctioned five VeeFriend characters for over $1.2 million.

The VeeFriends collection is made up of 10,255 character NFTs and each represents intellectual property. A benefit of owning a VeeFriend is a three-year admission token to the multi-day superconference VeeCon. One NFT called “Hangout Hawk” even comes with the opportunity to receive mentoring sessions with Vaynerchuk. One collector, YouTuber Dan Markham, exchanged his Tesla Roadster for graphic novelist Eli Burton’s “Positive Porcupine” NFT. In the following Twitter thread, VeeFriends outlines its latest collaborations with companies from card game producer Uno to the department store Nordstrom.

[5-min read] What’s been going on in VeeFriends this week!

FLUF World is a collection of metaverse-ready 3D avatars called FLUFs living as NFTs on the Ethereum blockchain. FLUFs are programmatically generated rabbit avatars. In an interview with Cointelegraph, New Zealand-based FLUF World founders shared their approach to entering the metaverse. “We had this strong belief that Web 3.0 metaverse is this community-led creative vision,” they said, adding:

“When you start with stories and weave them into characters, then people fall in love with those characters. And we’ve been really deliberate to build them in a way that makes them dynamic and engaging. It’s not a static piece of art. You can name them, modify the backgrounds or attach new music, according to your mood or vibe. All of this data is stored on-chain. And the users are part of the co-creation journey with us.”

During Miami Art Week, FLUF World hosted a FLUF Haus event to introduce FLUFs popstar, AngelBaby, who performed the first-ever live metaverse concert for both physical and virtual attendees. FLUF Haus organizes events that engage real-world artists into the metaverse and is FLUF World’s way of remaining connected to the physical world.

Users can purchase virtual real estate called Burrows, which serve as meeting spaces for FLUFs and other avatars. The latest addition to FLUF World includes 9,669 Party Bears, which sold out within 10 minutes of being dropped to users who wanted new avatars to explore the metaverse alongside existing FLUFs and spider Thingies.

What do Canadian musical sensation Grimes, seven-time Formula One world champion Lewis Hamilton and legendary American rapper Snoop Dogg all have in common? Answer: Together with augmented reality developer Jadu, they are all behind a series of rare Jadu Hoverboards NFTs for players to fly around the augmented reality inside the metaverse. This collection of 6,666 hoverboard NFTs was the firm’s second NFT drop. The first, consisting of 1,111 Jadu Jetpacks, sold out in 20 seconds with a total volume of 2,632 ETH ($10.5 million) traded.

The Jadu Hoverboard collection has also been making waves with 1,873 ETH ($7.5 million) in cumulative volume traded since inception. Recently, Jadu raised $7 million in a seed round backed by prominent venture capital firms such as Coinbase Ventures to fund the development of the world-scale augmented reality game Mirrorverse, launching next year. On top of that, Jadu is partnering with The Sandbox to bring its jetpack NFTs to the latter’s metaverse. Both jetpacks and hoverboards will be compatible with 40,000-plus avatars, including popular collections like FLUFs and CyberKongz.

Back to the Future Day is the perfect time to reveal the Jadu Hoverboard NFT.

On Dec. 14, Nike entered the metaverse after acquiring RTFKT, with the goal of delivering next-generation collectibles to bridge the gap between culture and gaming. RTFKT, pronounced like the word “artifact,” is a studio fostering a new digital sneakers culture for video game and blockchain enthusiasts. In an exclusive interview with Cointelegraph, Chris Le, the firm’s co-founder, said casually: “I manage a team of artists and conceptualize sneaker designs. If I feel like getting my hands dirty, I’ll model the 3D sneakers, do all the rendering and make the NFT’s out of them.” Although the collection consists of 13 sneaker NFTs, they’ve fetched an impressive 976 ETH ($3.9 million).

Aside from NFT footwear, RTFKT also minted a series of 20,000 three-dimensional avatars on the Ethereum blockchain called Clone X. These in-game characters can be used in decentralized virtual reality realms, such as Decentraland, together with other wearable items. At the time of publication, RTFKT Studios second collections trending in terms of trading volume for its Clone X collaboration with artist Takashi Murakami.

RTFKT is now a part of the NIKE, Inc. family. ‍ pic.twitter.com/5egNk9d8wA

Pak, a pseudonym for a digital artist or anonymous entity, ranks as the top NFT artist with a total artwork value sold of $321 million across 66,319 pieces, according to data by CryptoArt. The creator’s works are known for their sophisticated blend of futurism and spatial depth interwoven with geometry.

During an event earlier this month called Merge, interested buyers were required to purchase as many Merge tokens as they desired during a 48-hour sale. Each new Merge token transfer was then combined with the original Merge token in the recipient’s wallet, forming a single entity and increasing its “mass” value. At the end of the auction, buyers then received dynamically generated NFTs based on how much “mass” they accumulated throughout.