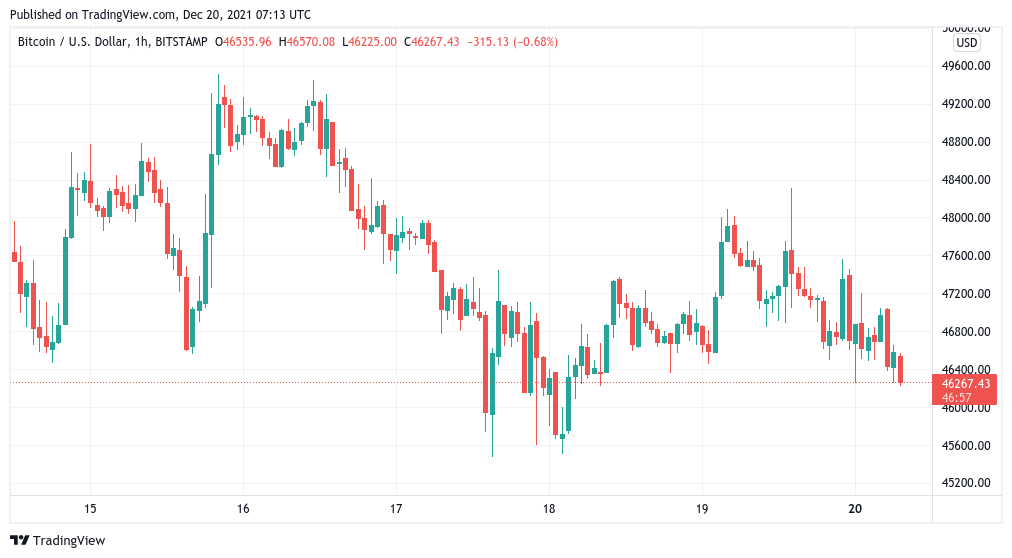 Bitcoin (BTC) starts a new week with analysts looking for a bottom — but one which may not mean a dip to $40,000 or lower.

After an unremarkable weekend, Bitcoin bulls now face a fresh week of bearish sentiment across the global economy as risk appetite stays tepid.

Amid the lack of a “Santa rally” for practically anyone, there seem to be few triggers to help BTC/USD return higher in time for the new year. At the same time, on-chain metrics remain strong, and miners are refusing to spend.

With Christmas almost here, Cointelegraph takes a look at what to look out for this week when it comes to assessing where Bitcoin may be headed.

Bitcoin failed to produce any significant moves over the weekend, but now, attention is turning to a potentially volatile “bottoming” for the market.

At $46,000, BTC/USD remains firmly entrenched in a familiar range, with bulls failing to find the momentum for a fresh attack on the $50,000 mark.

For popular trader Pentoshi, these could nonetheless avoid a retest of $40,000. In a tweet Sunday, he highlighted major exchange Bitfinex and its large-volume traders as a likely source of support.

“Finex makes the tops and bottom on $BTC. Believe this is a similar situation where they will just absorb selling at these key levels. See Sep post 40.7k bottom,” he wrote, referencing market events from the end of September.

Others were more optimistic, with fellow trader Galaxy calling for a “green week” led by altcoins.

With 10 days left of the year, a surprise finish to 2021 is also not being universally ruled out when it comes to crypto markets.

Still bottoming, the historical cycle metric could yet produce a surprise for traders, having almost hit its lowest “overbought” level ever.

“Will we see the same this time with a bounce and rally into the Christmas break? Or will we see more year-end profit-taking?” the update summarized.

“Right now $BTC is at a key decision point level, so it would certainly be wise to manage one’s risk carefully until a clear trend emerges.”

One cohort of Bitcoin hodlers in no mood to sell at current prices is miners, whose outflows have reached their lowest in three months.

According to data from Glassnode, miner outflows have almost halved in just over a month, reiterating the turnaround in market dynamics since the all-time highs.

Further data shows that unspent supply is about to hit all-time highs, the culmination of a hodling trend from miners that began in 2020.

In other words, miners are in no hurry to spend their block subsidies once a new block is successfully mined.

These coins are issued to miners as a reward for solving a block, but have never been spent onchain.

Macro volatility is set to continue into 2022 in a trend that is unsettling investors, sources warn this week.

Just like Bitcoin, an unexpected bout of bearishness means that Q4 this year may end with a whimper and deny the market its classic “Santa rally.”

At fault are both the coronavirus and United States political turmoil, the latter coming in the form of one senator rejecting President Joe Biden’s embattled $2-trillion spending package.

Stocks in Asia fell on the day, and ahead of the U.S. open, the mood was cautious.

“Investors should be prepared for Covid to continue to be a main factor in market performance heading into 2022,” Robert Schein, chief investment officer at Blanke Schein Wealth Management, told Bloomberg.

“After the bull run we’ve seen over the past 21 months, investors aren’t as used to prolonged periods of volatility.”

Schein was referencing the comeback seen throughout global markets since March 2020, when a cross-market crash also took Bitcoin to lows of $3,600.

Amid all this, the U.S. dollar is returning to strength — a potential fresh headwind for BTC, which is traditionally inversely correlated with the greenback.

The U.S. dollar currency index (DXY), which measures dollar strength against a basket of major trading partner currencies, stood at 96.6 at the time of writing, having almost hit 97 late last week.

Bitcoin under $50,000 should arguably look like a bargain to large-volume investors, but one industry yardstick tells a different story.

GBTC, which next year plans to convert to a Bitcoin spot price exchange-traded fund (ETF), has seen major changes in market behavior in the second half of 2021.

As Cointelegraph reported, from spending the first portion of its life trading at a hefty premium, the investment fund now offers institutional buyers what is de facto “bargain basement” BTC.

At 22.95% as of Dec. 18, the discount has never been bigger — a curious phenomenon that points to what some argue is an even more curious lack of demand for GBTC shares.

How can Bitcoin be ready to go full sned in to a blow off top run when the you can currently purchase GBTC shares, backed by physical BTC, at a 17% discount and nobody is interested….asking for a friend

Regulatory uncertainty surrounding spot-based ETFs remains a talking point for the United States. As only futures-based products received the green light this year, the industry continues to rally around the issue, arguing for a change in 2022.

“If Arca’s proposal is approved, GBTC will be able to use the ETP mechanics that 4 minimize the variations between its share trading prices and the net-asset value (‘NAV’) of its Bitcoin holdings, and as a result, U.S. retail investors will be able to gain access to the Bitcoin market through the familiar ETP structure and at trading prices that stay more closely aligned with spot Bitcoin trading prices.”

Spot-based ETFs already operate with huge success over the border in Canada, as well as in Europe and elsewhere.

Not much may have happened over the weekend when it comes to spot price action, but that is little consolation for nervous traders.

According to the Crypto Fear & Greed Index, sentiment around crypto is as weak as ever.

Continuing its crisscrossing trend, the Index is back in the “extreme fear” zone as of Monday, having failed to crack even 30/100 throughout December.

After that bottoming structure and consolidation, it took just a single month for the Index to return to the “extreme greed” zone.