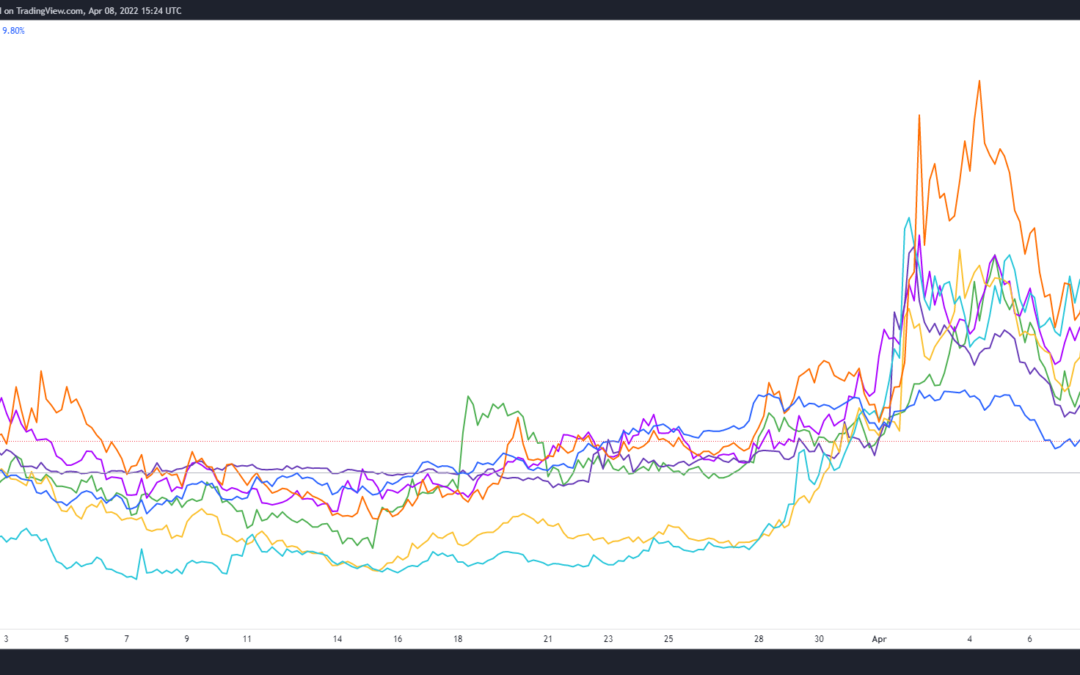 The Polkadot ecosystem sorely underperformed compared to other layer-1 networks in 2021, while the slow roll-out of parachain auctions and mainnet launches left the network playing catch-up in 2021.

It appears that this trend came to an end in mid-March when numerous projects in the Polkadot ecosystem saw their prices climb higher after users began to engage with networks that expanded their offerings and made a push toward Ethereum Virtual Machine (EVM) compatibility.

Here’s a look at six top moving protocols in the Polkadot ecosystem that are helping to establish a presence in the cryptocurrency market.

Interoperability is the key

Interoperability has been one of the driving themes of the cryptocurrency market for the past year, and Moonbeam (GMLR) and Astar (ASTR) are two Polkadot parachains focused on bringing multichain compatibility with Ethereum other networks.

Moonbeam is a smart contract parachain aiming to make it easier to use Ethereum developer tools to build or redeploy Solidity projects in Polkadot’s substrate-based environment.

It was the first parachain to go live on the Polkadot mainnet and plans to bring on-chain governance, staking and cross-chain integration to the base Ethereum feature set.

Astar is a decentralized application (DApp) hub that supports a variety of standards including Ethereum, WebAssembly (WASM) and layer-2 solutions like zk-Rollups. The goal of the protocol is to become a multichain smart contract platform capable of supporting multiple blockchain networks and virtual machines.

Since its launch in late January, the Astar network has seen the total value locked on the protocol hit a high of $1.47 billion, and the metric currently sits at $1.31 billion, according to data from DefiLlama.

Moonbeam and Astar provide an important service to the Polkadot ecosystem as the Polkadot Relay Chain does not support smart contracts.

Polkadot’s DeFi ecosystem is still in its infancy

The decentralized finance (DeFi) ecosystem on Polkadot has started to gain traction, thanks to new developments from Acala and Centrifuge.

Acala has filled an important role in Polkadot’s DeFi ecosystem by bringing the network its first native stablecoin — aUSD.

Stablecoins have become a fundamental piece of the underlying DeFi infrastructure and the addition of aUSD brings a decentralized stablecoin to market that is collateralized by Polkadot (DOT), DOT derivatives and eventually, by cross-chain assets like Bitcoin (BTC) or Ether (ETH).

With Acala and aUSD, the Polkadot ecosystem has now joined the likes of Terra, Frax Share and Curve Finance in the ongoing “stablecoin wars” that have become a dominant theme in the evolution of DeFi.

Centrifuge is a decentralized asset financing protocol designed to bridge the real world with DeFi through the tokenization of assets like invoices, real estate and royalties.

The main objectives of the protocol are to help users generate profits that are not tied to cryptocurrency assets, lower the cost of capital for small mid-size enterprises and provide investors with a stable source of income.

With Centrifuge, companies are able to use tokenized real assets as collateral to access financing on the DApp lending protocol Tinlake.

The fund is seeking early-stage projects from any @Polkadot or @KusamaNetwork parachain with strong $aUSD stablecoin use cases https://t.co/OJ2V47ZUry pic.twitter.com/NDgLg2bG8N

Acala and Centrifuge are taking part in the $250 million “aUSD Ecosystem Fund” that was launched on March 23, shortly before the Polkadot ecosystem began to trend higher.

Web3 is another buzzword trending across the crypto ecosystem, and the term is really just a fancy term for the integration of blockchain technology with the internet.

Saito and Kylin are two protocols in the Polkadot ecosystem that are focused on facilitating the evolution of Web3 through scalability and data management.

Saito is a blockchain network designed to process Terabytes of data by paying rewards to nodes in the peer-to-peer (P2P) network, instead of using miners or staking, as its method of delivering a permissionless and scalable network.

As for data management in the Polkadot ecosystem, Kylin has led the charge by providing a decentralized data infrastructure solution known as DeData for Web3. The Kylin ecosystem consists of a data oracle, data analytics and a data marketplace.

Kylin data analytics is a set of tools designed for data warehouses that extract meaningful data findings, patterns and interpretation, all while implementing low-cost commercialization functionalities for the public.

The Kylin data oracle is an advanced decentralized data feeding protocol that is capable of processing any type of data on- and off-chain in a validated way.

Want more information about trading and investing in crypto markets?