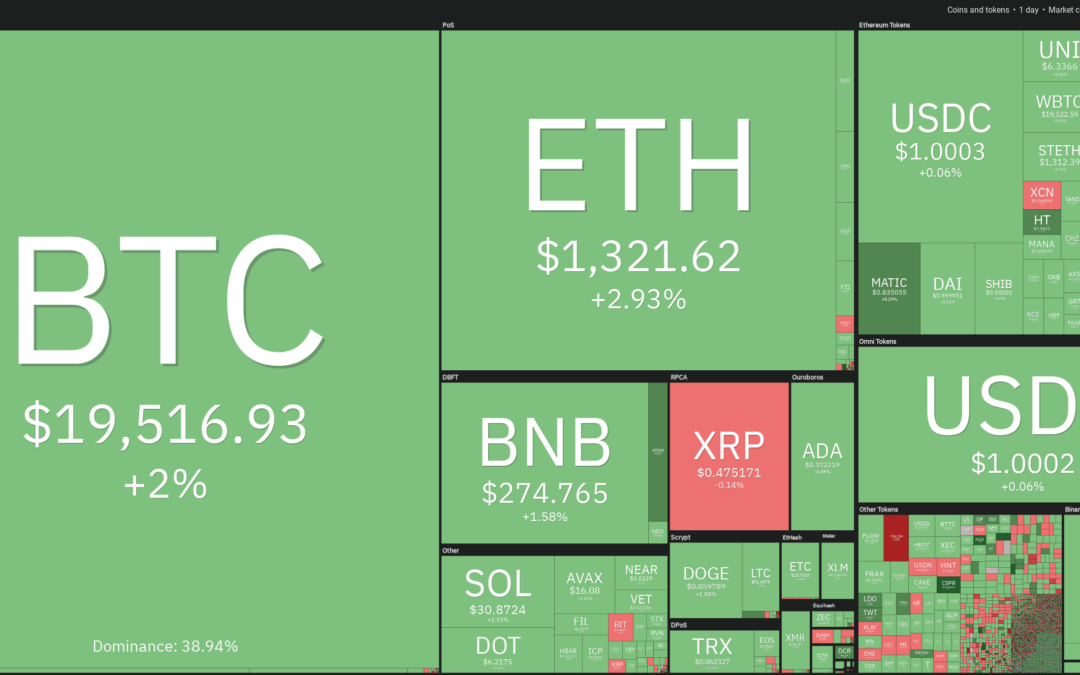 The scenario changed drastically on Oct. 17 after the earnings,  season ramped up and a sharp policy reversal from U.K. Finance Minister Jeremy Hunt added detail to the government’s plan to fix his predecessor’s (Kwasi Kwarteng’s) fiscal package, which had triggered a record fall in the value of the GBP and a near liquidation of pension plans in the United Kingdom.

At the time of writing, the Dow is up 1.78%, while the S&P 500 and Nasdaq present 2.57% and 3.26% respective gains. Meanwhile, Bitcoin (BTC) has managed to stay well above its year-to-date low showing short-term outperformance.

Some analysts expect that Bitcoin could be closer to a bottom. Twitter trader Alan said that the stochastic indicator on Bitcoin’s monthly chart has reached levels similar to those seen during the 2014 and 2018 bear markets, indicating a likely macro bottom.

Similarly, LookIntoBitcoin creator Philip Swift said in an interview with Cointelegraph that Bitcoin could be close to major cycle lows. Citing various metrics, Swift said that Bitcoin may face another two to three months of pain but should start its outperformance in 2023.

As Bitcoin sustains above its June low, select altcoins are attracting buyers. Let’s look at  charts of five cryptocurrencies that look interesting in the near term.

Bitcoin broke above the 50-day simple moving average (SMA) ($19,689) on Oct. 14 but the higher levels attracted heavy selling by the bears. That pulled the price back below the 20-day exponential moving average (EMA) ($19,387).

Buyers are trying to defend the immediate support at $18,843 but the recovery could face resistance at the 20-day EMA and then at the downtrend line. If the price turns down from the overhead resistance, the possibility of a break below $18,843 increases. The pair could then plummet to the $18,125 to $17,622 support zone.

To avoid this catastrophe, the bulls will have to force the price above the downtrend line. If they manage to do that, the BTC/USDT pair could rally to $20,500. A break above this resistance could signal the start of a relief rally to $22,800.

The pair has been stuck between $18,125 and $20,500 for some time. If bulls push the price above the moving averages, the pair could climb up to $20,000 and then to $20,500. The bears may mount a strong resistance at this level but if bulls overpower them, the recovery could pick up speed.

Another possibility is that the price turns down from the moving averages and drops below the support at $18,843. That could intensify selling and the pair could then plunge to the support at $18,125. The bulls are expected to defend this level with vigor.

Polygon (MATIC) has been attempting to rise above the downtrend line for the past few days. Although the bears successfully defended the overhead resistance, they could not keep the price down on Oct. 13. This suggests that bulls are buying the dips as they anticipate a move higher.

If the price climbs above the downtrend line, the short-term trend could tilt in favor of the bulls. The MATIC/USDT pair could then attempt a rally to $0.94. This level may again act as a strong barrier but if bulls overcome it, the pair could rally to $1.05.

Alternatively, if the price once again turns down from the downtrend line, the bulls may give up and the pair could then drop to $0.69. The bears will have to pull the price below this level to start a deeper correction to $0.62 and then to $0.52.

The downtrend line has been witnessing a tough battle between the bulls and the bears. Although the bears have come out on top, the bulls are not willing to give up. They aggressively purchased the drop to $0.71 and are again trying to push the pair above the downtrend line.

The 20-EMA has flattened out and the RSI is near the midpoint, indicating a balance between supply and demand. If bulls push the price above the 50-SMA, the pair could challenge the downtrend line. A break above this resistance could clear the path for a possible rally to $0.86.

On the other hand, buyers may bail out of their position if the price turns down and breaks below $0.77. The pair could then slide to $0.71.

The sharp rally of the past few days pushed the RSI into deeply overbought territory, which may have tempted short-term traders to book profits. That started a correction that could reach the 38.2% Fibonacci retracement level of $6.61.

If the price rebounds off this support, the bulls will try to resume the up-move by pushing the HT/USDT pair above $8.20. If they succeed, the pair could rally to $10.

The 4-hour chart shows that the price rebounded off the 20-EMA but the bulls could not sustain the higher levels. This shows that traders could be booking profits on minor rallies.

The 20-EMA has flattened out and the RSI is just above the midpoint, indicating that the bullish momentum could be weakening. If the price breaks and sustains below the 20-EMA, the next stop could be the 50-SMA.

If bulls want to regain the upper hand, they will have to push the price above $7.65. The pair could then retest the overhead resistance at $8.20. A break above this level could start the next leg of the uptrend.

Quant (QNT) broke above the overhead resistance at $162 and has continued higher, indicating sustained demand from the bulls.

The upsloping 20-day EMA ($149) indicates advantage to buyers but the RSI in the overbought territory points to a possible minor correction or consolidation in the near term. Buyers are expected to defend the drop to the breakout level of $162.

If the price rebounds off this level, the QNT/USDT pair could rise to $200 and later attempt a rally to the target objective at $230.

This positive view could invalidate in the near term if the price turns down and breaks below the 20-day EMA. The pair could then decline to the 50-day SMA ($120).

The pair is facing resistance near $188 but the rising moving averages and the RSI in the overbought zone indicate the path of least resistance is to the upside. If buyers thrust the price above $188, the pair could rally to $204.

Contrarily, if the price turns down and breaks below the 20-EMA, it will suggest that traders may be booking profits. That could pull the price down to the crucial support of $162. A break and close below this support could indicate that the pair may have topped out in the near term.

OKB (OKB) has been trading above the moving averages for the past few days and the RSI has jumped into the positive territory, indicating advantage to buyers.

The first support on the downside is $16.39. If the price turns down and breaks below this level, the pair could slide to the moving averages and then to $15.

The price turned down from the overhead resistance at $17.50 but the bulls are trying to defend the 20-EMA. If the price rises above $17, the likelihood of a retest of $17.50 increases. Buyers will have to clear this hurdle to signal the resumption of the uptrend.

The positive momentum may weaken if the price turns down and breaks below the 20-EMA. The pair could then decline to the 50-SMA. If this level also cracks, the next stop could be $15.50.

On the contrary, if the price rebounds off the 50-SMA and rises above the 20-EMA, it will suggest accumulation at lower levels. The bulls may then again attempt a rally to $17.50.