Is Blockchain the Future of Esports? – The FINANCIAL

When the first application of Blockchain was introduced through Bitcoin in 2008, not many people thought it could become the big technology we have today. Blockchain is one of the revolutionary technologies that are transforming Canadian sectors such as banking, finance, insurance, supply chain, logistics, and gaming, to mention a few.

On the other hand, eSports is not a new thing as the first tournament was organized in 1972 and dubbed the Space Invaders Championship. Even though eSports is older than Blockchain, the two spaces complement each other, and experts believe that the latter will make eSports better. We linked up with our technology writer Kevin Cochran (checkprofile) to educate us on Blockchain in sports.

A blockchain is a digital ledger of transactions that are recorded, duplicated, and distributed across all the computers that are within the network. Every block on the chain has some transactions tied to it, and whenever a new transaction is added to the block, the information will be sent to all the participant’s ledgers.

The distributed ledger technology makes the blockchain technology decentralized instead of having a central authority that manages all the processes. Every transaction within a block is secured by a cryptographic signature known as a hash. This signature is immutable.

eSports is not a new phenomenon, as we have already highlighted. eSports, in the simplest terms, is organized and competitive video gaming. Video gamers will thus come together and compete against each other. Such competitions are attracting sponsors, advertisers, and we can now see different prizes attached to them.

Some of the most famous games that attract eSports lovers are Call of Duty, Counter-Strike, League of Legends, Madden NFL, Overwatch, and Fortnite. Millions of fans from different parts of the world follow these sports, and they can attend live events or even follow live action on TV and streaming devices.

How is Blockchain changing eSports?

Some Canadians fail to join various gaming platforms simply because the payment options available are limited. eSports payments through crypto are now making it easy for the unbanked community to enjoy staking at eSports events.

The beauty of crypto payments is that they are anonymous, which works great for those who do not want to get much exposure. A Canadian player can thus join a bitcoin casino today and make deposits and start staking on eSports. Bitcoin is so far ranked as the best esports cryptocurrency. Most of these casinos accept other major cryptos such as Ripple, Ethereum, and Litecoin.

What if the organizers manipulate the results of various eSport events and you end up losing your stake? That is a very genuine question that can bother anyone who wants to bet on such games.

Blockchain provides an immutable ledger that stores such information permanently. Thus, it will be hard to manipulate the results unless the hacker controls more than half of the nodes on the blockchain network. eSports fans can also follow the action in real-time as it is recorded on the Blockchain.

Cases of personal data ending up in the hands of 3rd parties are very common in the modern online world. Playing cryptocurrency games is the perfect opportunity to decide what goes to the public and what remains anonymous.

You no longer have to worry that the iGaming platform will have your personal details, like what happens when you use credit cards. The other players do not have to know your exact location. 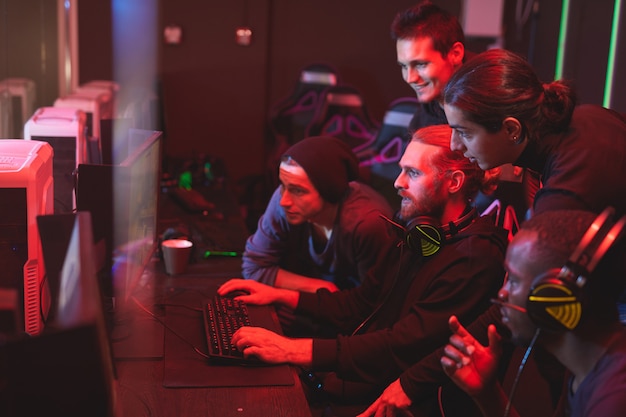 Trust is a major issue in the online world. Cases of game developers who are never paid are common in the modern world. Blockchain provides the perfect platform where game developers can interact with their clients in real-time.

Smart contracts also come in handy when distributing prize money between the organizers and game developers. The transparency of the blockchain networks also makes players comfortable engaging in such tournaments as rigging cases are eliminated.

eSports and Blockchain seem like a match made in heaven. However, we are still to experience all the benefits that Blockchain can have on the eSports sector. Even though eSports is getting mainstream, we are yet to see the coverage that is supposed to get, and we expect more games to be included in various Canadian casinos.

Kevin is a 36-year-old project manager from Montreal, Canada. He enjoys fishing, food, and the outdoors. He’s thoughtful and calm. His hobbies include exploring his home country’s wine regions and discovering new cuisines to pair. His mission in life is to become the best leader he can be in order for his team to deliver their best on projects.

Author: The FINANCIAL
Over the past year, much has been written on the impacts of the COVID-19 pandemic on the mental health of children and adults.
How much protection have we built against the virus  as a result of natural infection and vaccination?
The FINANCIAL — The COVID-19 pandemic has affected the venture capital (VC) investment landscape in the Asia-Pacific (APAC) region, but it has not…